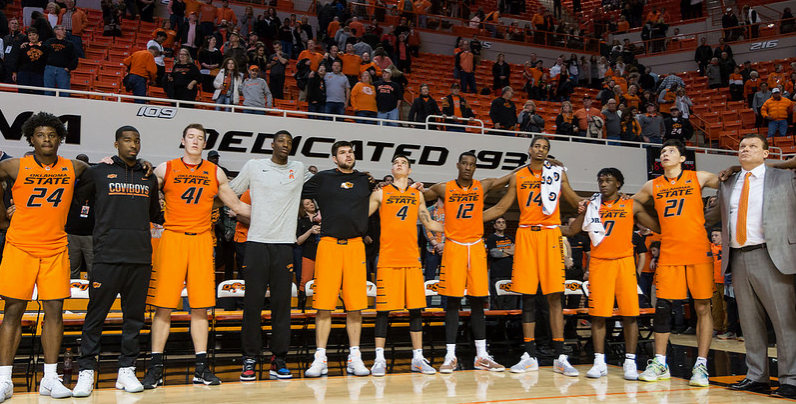 The Cowboys started slow but used some stingy defense and transition points to build a big lead into the second half that proved insurmountable for the sluggish Longhorn offense.

Let’s jump into the five thoughts.

Even with a close loss to Baylor earlier in the week, the Cowboys are on an upward trajectory. They came out a little slow on Saturday but used their pace and opportunistic defense to get going offensively. After falling back 23-15, the Cowboys — led by their big 3 in Evans, Carroll and Forte — orchestrated a 20-2 run that knocked the ‘Horns on their heels.

OSU’s offense is impressive to watch. Brad Underwood has the No. 2 offense in adjusted efficiency according to KenPom using players that were on the roster when he showed up. If the defense can be good, not great and force some turnovers here and there, they should be a hard out in March. Assuming they make the postseason.

2. Come here for all the Davon Dillard love.

Early in the second half, Davon was sitting at 9 points — one shy of his career high —  when this happened.

In his last five games before Texas, he scored 10, 10, 1, 8, and 9. He ended the Texas game with a new career high in points (15) and tied his career high in rebounds (8). A friendly reminder: Davon Dillard wasn’t going anywhere.

A Davon Dillard big head has been added to the OSU student section. Applause from fans as he enters the game.

He was huge on the defensive end too. In a stretch late in the first half, Dillard was instrumental in two straight Texas turnovers that led to a Jeff Carroll dunk and a Phil Forte three in one sequence. The latter pushed the Cowboys to a 29-25 lead that began their 11-0 run — part of a 20-2 run that the Longhorns were never able to recover from.

Dillard has channeled his inner Iverson in a constructive manner. Grab some popcorn.

3. The Cowboys had no answer for Jarrett Allen.

Welp, we may have to get used to this one.

The 6-11 freshman basically did what he wanted to in the paint. Allen poured in 18 points on 13 shots and grabbed 10 rebounds. Five of those boards led to extended possessions for the Longhorns who won the offensive rebound battle 14-12 over the No. 6 offensive rebounding team in the nation (by percentage).

If there is one area of concern moving forward for Underwood’s team, it’s size in the post. N’Guessan may end up being a nice player but he’s obviously not ready to stand toe-to-toe with some of the front court players OSU still has to play — especially if they make it to the tournament. Solomon has improved this year but is far from a force down under.

4. OSU could not get to the line for some reason.

Not that it ended up mattering, but maybe the most curious stat of the day was OSU being held to a season-low eight attempts from the stripe. They made six of them. But in a fairly physical game at home they were more than doubled by the visitors. Texas went a sad 9-for-18 from the line, thanks mostly to Allen.

OSU shot 11 more 3-pointers (19) than they did free throws. Normally that may spell disaster. Fortunately, the Cowboys shot 53 percent from beyond the arc 50 percent overall from the field. You’d still like them to be more aggressive if you’re nitpicking. Replicate that stat against better teams or when you’re on the road and you may be in trouble.

The senior forward had one of his better games of the season against UT. After a junior season in which he averaged 10.6 points and 5.1 rebounds, Hammonds is one of the few players who have not only shown a marked improvement.

He scored 11 points on a perfect 4-4 (3-of-3 from 3) and grabbed 4 rebounds in 16 minutes before fouling out. The Cowboys needed him to be that good with Lindy Waters inactive with a foot injury and with the front court of Texas.

He was at least able to make it a little harder on Allen and Co. by using up his five fouls. He looked confident shooting the three and if that carries over, it adds so much more to OSU’s already lethal offense.