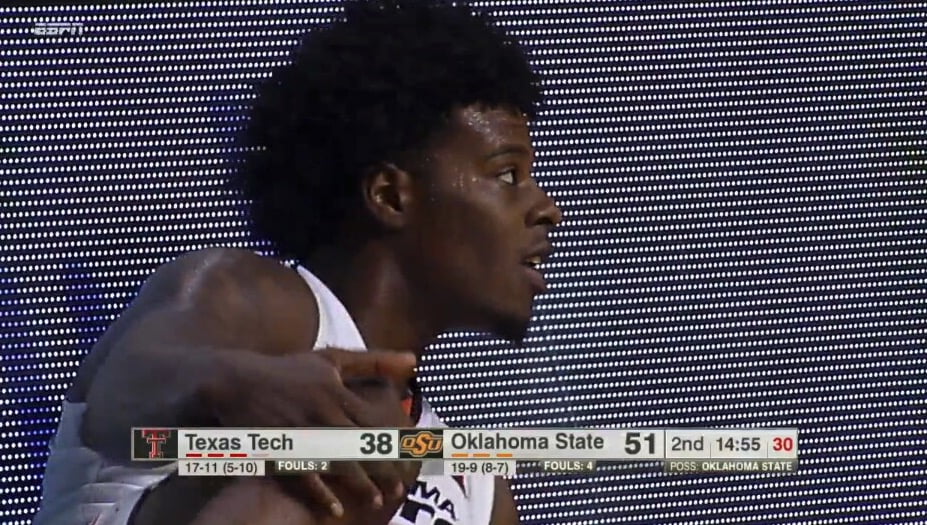 Oklahoma State continued its hot streak on Saturday, winning its 10th game in 11 tries over Texas Tech, 80-63. Led by the torrid shooting of Jeffrey Carroll (6-of-11 from the field, 17 points) and Phil Forte (5-of-8, 15 points), the Cowboys won their fifth home game out of six in the historic Gallagher-Iba Arena, jumping out to an early lead and never relinquishing it.

The Cowboys, already a projected 6-seed according to Joe Lunardi, continue to rise and Thomas Dziagwa is all of us:

The Cowboys extended the lead to 18 points at one point in the first half, but the Red Raiders, fighting for their NCAA tournament lives, battled back in the second half, cutting the Cowboys’ lead to 6 points.

However, Jawun Evans woke up after starting 1-of-5 from the field, closing the game out in style. He finished with 15 points, 6 assists, 3 rebounds and 2 steals — another stellar day at the office for the Cowboys’ floor general.

Let’s get into the five thoughts on the Cowboys’ win over the Red Raiders.

1. Phil Forte Is a Different Player at GIA

Phil Forte turned in yet another fantastic performance in front of the home crowd. He was 5-of-8 from the field, 5-of-7 from the 3-point line, and had 15 points. You know it’s a good day when he’s pulling up from the midcourt logo with no hesitation..

For whatever reason, the all-time 3 point leader at Oklahoma State is a totally different shooter at Gallagher-Iba vs. away- check out these numbers for Forte shooting this season:

There’s no question about it: Phil is an impact player at home and struggles mightily on the road. Unfortunately for the Cowboys, this could come into play in March in Kansas City at the Big 12 tournament, and wherever it lands in the NCAA tournament. Having a third scorer to match with Jeffrey Carroll and Jawun Evans makes the Cowboys an incredibly difficult team to guard defensively. It’s yet to be seen if Phil can contribute in a big road game.

The Cowboys were uncharacteristically careless with the ball today against Texas Tech, turning it over 20 times against a Tech defensive team that ranks 9th (out of 10) in the Big 12 in adjusted defensive efficiency. Brad Underwood has often gone with both his point guards on the floor at the same time, Jawun Evans and Brandon Averette. That didn’t seem to stop the turnover bleed today.

It was Evans and Carroll (4 turnovers a piece) that were the biggest turnover culprits today. They’ll need to tighten that up as the Cowboys close the year against two very strong backcourts in Iowa State and Kansas.

3. So what do we have with Leyton Hammonds?

With Lucas N’Guessan’s minutes dwindling and Cam McGriff still just a freshman, Hammonds absolutely needs to step up to help Mitch Solomon inside consistently if the Cowboys are going to make any noise in the NCAA tournament.

4. The Cowboys Continue To Hammer The Glass

Oklahoma State won the rebounding battle again today, hammering the Red Raiders on the glass 38 to 27. It was a balanced effort, with Mitch Solomon (6 boards),Carroll (6 boards), Hammonds (5 rebounds), Forte (5 rebounds!) and Cameron McGriff (4 boards) chipping in. A large part of Oklahoma State’s offensive game is the ability to consistently come up with second chances as the 11th best offensive rebounding team in the country (13.86 per game), and today was no different.

5. Oklahoma State Was Money at the Charity Stripe

Another big reason for Oklahoma State’s continued offensive success? Free throws. The Cowboys were an astounding 22-of-22 from the line today, and it’s not surprise anymore. The Cowboys are the 8th best free throw shooting in the entire country, shooting 77.5 percent from the line on the year.

Looking ahead to March, the Cowboys will be a tough team to beat in close games, and its shooting at the line is probably the biggest reason why. Of course, it doesn’t hurt to have Jawun Evans closing things out.