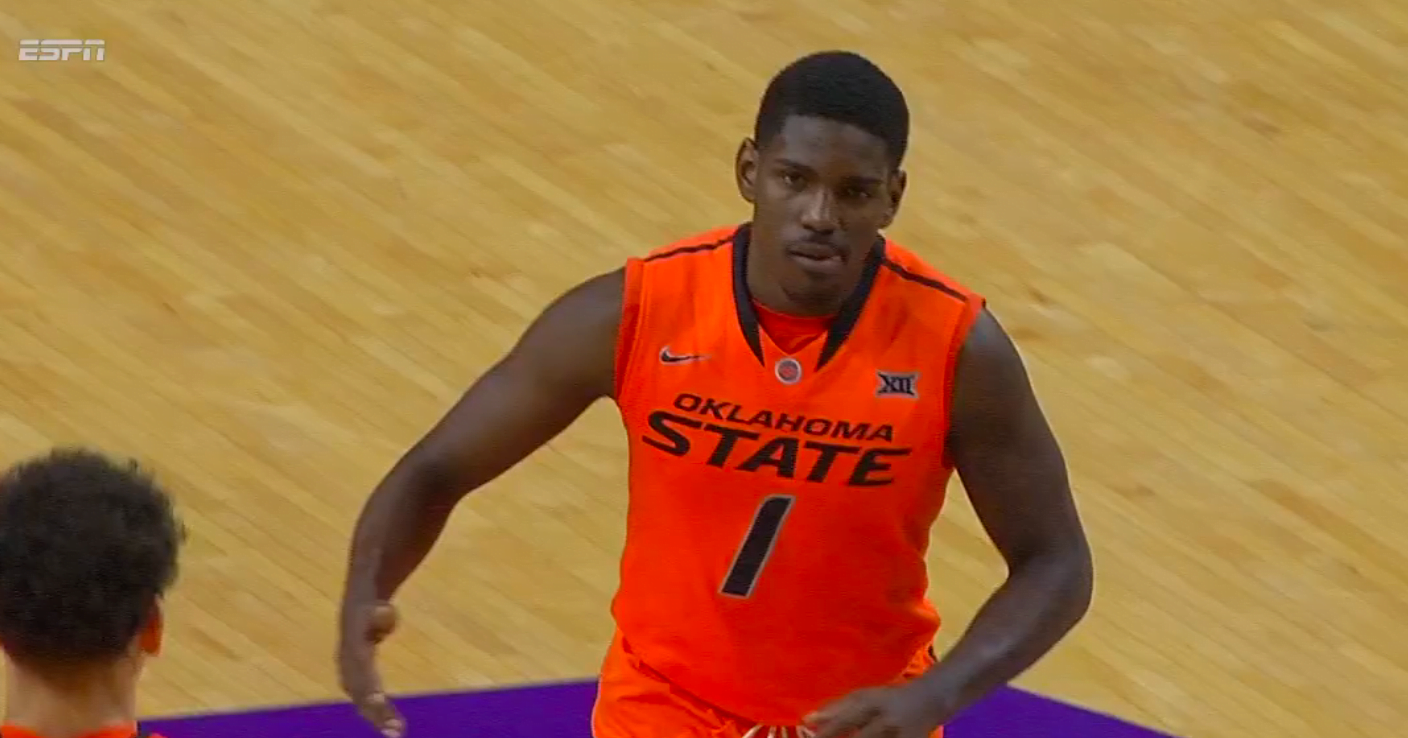 Oklahoma State rolled to its ninth win in 10 games and fifth-straight Big 12 road win 80-68 in Manhattan over Kansas State on Wednesday. The W means the Pokes swept the Wildcats in Manhattan in football and hoops for the first time since 1982-83.

Jawun Evans led the way with 21 points, 9 assists and 4 rebounds, but he was not the Cowboys’ most efficient player on Wednesday night (more on that in a minute).

OSU turned a 14-point first-half deficit into a 12-point road win, the Cowboys climb above .500 after starting 0-6 in conference play and Mike Holder just texted his lawyers to draft something up for Underwood*.

1.Dillard and the bench Rocked First Half

Oklahoma State’s bench scored 21 of its 38 points in the first half with all 21 coming from Davon Dillard, Brandon Averette and Cam McGriff. It was vital for those three to show out as Evans and Jeffrey Carroll got into a little foul trouble and Phil Forte struggled to get going.

Dillard was a wind-up jack-in-the-box with a tip dunk, oop from Evans and multiple attempts to hammer hard enough that Bill Snyder would try and cast a spell on him as he went to the locker room. Averette and McGriff both provided similar energy to a team that badly needed a post-Bedlam shot in the arm.

Those three ate up a valuable 38 minutes and provided a ROI that would have delighted even the Property Brothers.

How about 18 points on 7-14 shooting and 10 boards for Hammonds? That’s 39 total points in his last two road games against purple Big 12 teams. He was in some ways OSU’s go-to guy down the stretch, too.

Surprisingly, one of their other ones was the freshman Averette who looked like an upper-middle class man’s Jawun for stretches in the second half. We already talked about his first-half boost, but Averette finished with 13 points on 6-6 shooting, one rebound and three assists in just 20 minutes played.

Pair those two with Evans, Carroll and McGriff, and you had a fascinating five that played some of the crunch time minutes for Underwood. I love it when he plays Evans and Averette together, and it was clear they were overwhelming Kansas State’s poor backcourt.

OSU hit nine of its last 14 shots and never let the ‘Cats breathe in the last few minutes (this is becoming a bit of a trend).

I have to say up front I’m about as big a fan of digging yourself a 14-point hole in the first half as I am of our three-year-old wandering the house at midnight and scaring me so badly I nearly urinate down the inseam of my authentic 2001 Oklahoma State basketball shorts (not that that’s happened or anything).

But there is something to be said about a team that is anchored to a self-belief that its points will come, its stops will emerge and a win will follow. I believe in the National Basketball Association, this is called “The Process.”

We talk about OSU’s offense a lot — and with good reason — but on Wednesday it locked down KSU to the tune of 7-23 in the second half. Stops turned into buckets, and the Cowboys were off to the races.

And OSU has attained the most valuable asset a college basketball team can possibly attain before the clock hits midnight on March 1: A confidence that no matter which team in the country you’re rolling out there and what the score of that game is, that eventually there will be a tally mark in the left-hand column for the guys in orange.

4. That Second Half Was Torture

If you’re a Kansas State fan, it was. Think about it. Last year they desperately wanted the alum and former assistant Underwood back in Manhattan to replace Bruce Weber who seems intent on carrying out the Travis Ford Plan.

From the three-man weave at the top of the key to the players complaining about every call to the inability of its talent to mesh, we’ve seen what’s playing out in Bramlage before (we saw it for eight years actually).

So Underwood strolls into Manhattan, gives you hope early on, makes you feel a little better about Weber because, well, KSU won in Stillwater after all and that first 10 minutes on Wednesday was pretty good.

Then all of a sudden your team shoots 30 percent in the second half, falls to 6-9 in the league, undone by a freshman and a role-playing senior, and Underwood is shaking hands with Bill Synder likely asking him if he remembers the last time Oklahoma State swept Kansas State in Manhattan in both sports.

It's going to get real awkward when the "BRING-HOME-BRAD!" chants start after this timeout. #okstate

You find yourself at a bar drinking a Miller High Life thinking about how good this team could be with a great coach and how the winningest active coach in college basketball WHO ALSO HAPPENS TO BE AN ALUM OF YOUR SCHOOL AND A FORMER ASSISTANT was available for hire last spring but you decided to play out the string and hope Weber sneaked your team into the NCAA Tournament for the first time in three seasons this year.

I mean, that has to sting at least a little bit, right?

One of the stranger stats for an OSU team that has relied on the 3-pointer for much of the year is that it only shot 25 percent on Wednesday from deep. It got 42 points in the paint, though, and proved that it can score however you want it to score.

That’s an important trait come March, and the reason I bring it up is because Oklahoma State will now almost officially be playing in the NCAA Tournament. This was its eight conference win and 19th overall. With the schedule it has played, even if it loses the last three and is bounced in Round 1 in Kansas City, it should get a slot in the Big Dance.

Now you’re playing for seeding. And for history. The last time Oklahoma State won six straight conference road games was a decade after World War II when it was still in the Missouri Valley Conference. It has a chance to do that next week at Iowa State.

And who knows? Maybe it will sweep the last three, pick up a couple in Kansas City and play its way into a 6-seed (or 5-seed?! or better?!)

With the best player on the floor nearly every night, a team that is fully bought in, a group of individuals that knows its roles and a coach that knows what the hell he’s doing, anything, I’m convinced is possible.