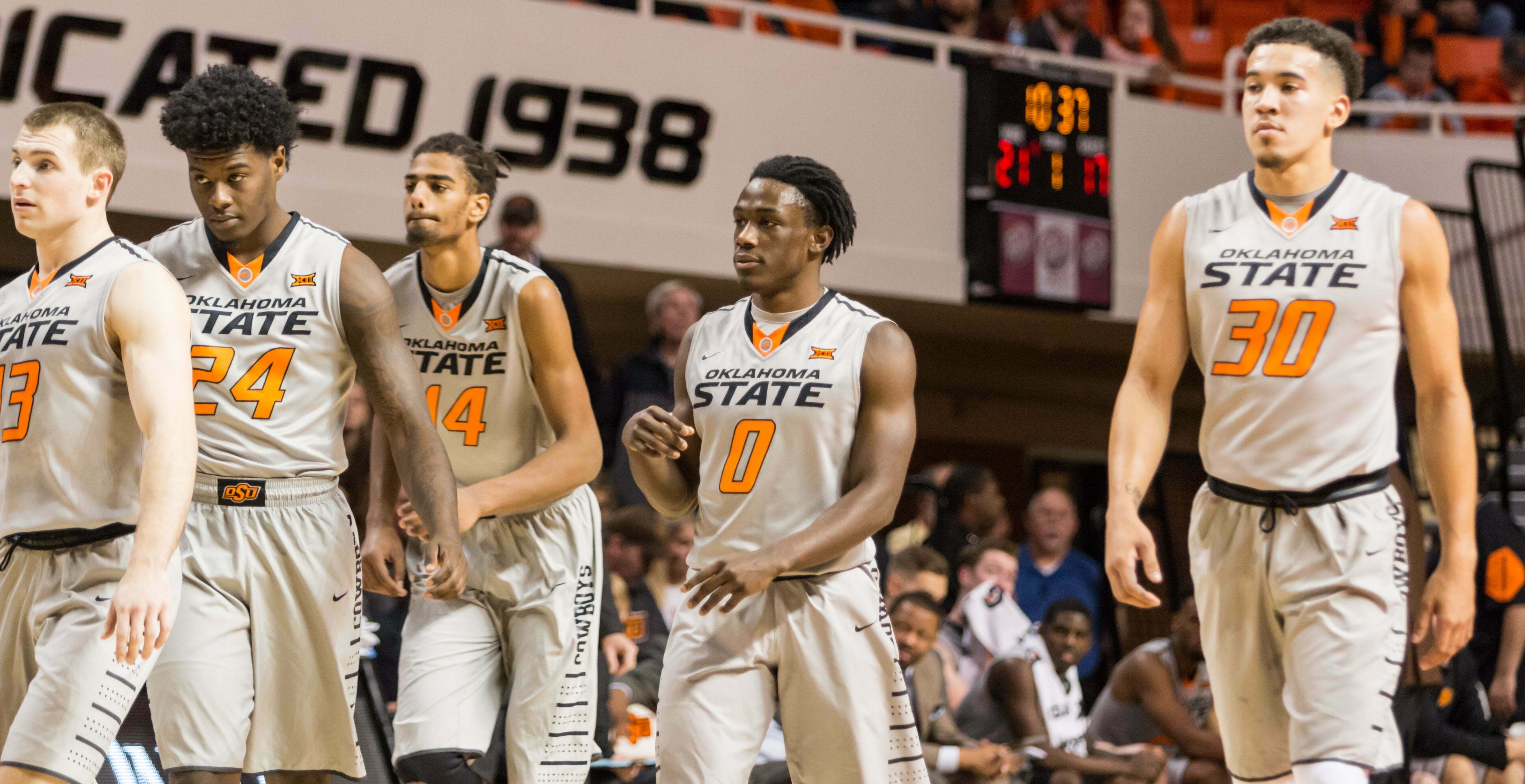 Oklahoma State rolled in Gallagher-Iba Arena on Thursday afternoon in its last non-conference quiz before the Big 12 starts next weekend. The Pokes got off a little slow but blazed out to a 52-33 halftime lead before cruising home over the Islanders. Five thoughts, let’s get to them.

Here’s the thing about Oklahoma State’s rebounding resurgence (they out-rebounded A&M CC 49-43 on Thursday). It’s the same as its offensive line resurgence. It is doing it with basically the same guys it had last season. The only new players are either guards or 110-lb. freshmen from The Netherlands, and OSU is somehow snagging over 40 percent of its missed shots on the offensive end. On Thursday, it nabbed 47 percent.

This is astounding, and without an elite shooting team, it is the quickest path to lots of wins.

Also, credit where credit is due here. I’ve been pretty critical of Mitchell Solomon, and I think deservedly so. But he was immense on Thursday on the glass. He had nine offensive boards (one off the school record) and 14 overall. Many of them resulted in easy putbacks which led to eight points on just 4/5 shooting. This should be his entire focus. He should only score if it is on a putback, and he should average .5 offensive boards per minute played. Well done by the big fella.

2. Rhythm to the game

I’ve been really impressed with their ability to stick to the gameplan even when bad teams are playing them close early on. They know a barrage of threes or four steals in six possessions is coming, and they trust they can get it. Will this always happen against the better Big 12 teams? No it won’t. But with the way they’ve been defending, it will happen more often than not which means we can look forward to what I think will be a very successful conference run.

Think about what would happen with this team if it lost Phil Forte right now. Not much, right? Sure, it would be a bummer and OSU’s production would probably fall off a little bit. But Underwood has such a good job early on of mitigating the risk of losing a star. What I mean by that is that he’s spread around the scoring and the confidence in such a way that the Cowboys can absorb a big-time injury or suspension and take a step back instead of four steps back.

This has been theme that has been building all season and was even more evident on Thursday as little-used Davon Dillard got real minutes and had eight points, six boards, an assist and two steals on Thursday. Also, Jawun Evans and Lindy Waters (two starters and offensive studs) were average at best in terms of scoring on Thursday. OSU didn’t miss a beat.

You get the feeling Underwood’s teams are less a couple of elite individuals shouldering the load and more legitimate 10-man squads bent on achieving a goal. That’s nice.

4. Dizzy out of his mind

There is a reason Brad Underwood said freshman Thomas Dziagwa thinks he is the best player in college basketball. He came out looking like it on Thursday as he hit his first four shots including three straight threes (the two-pointer was actually his first of the year). He cooled off late and finished 3/7 from three, but I’m in love with the way he’s embraced his own confidence and turned it into production. He’s become the ultimate fire-starter for Underwood’s offense.

Underwood talked about him at halftime.

“Wow. It’s pretty good,” said Underwood of Dziagwa. “He’s doing other things. He’s playing pretty good defense. That’s nice. He’s got that unusual ability to come in cold and make shots. He doesn’t take long to get going. I like going to him when he gets going. But our defense created a lot of those opportunities.”

There are concerns about this team. Namely that other teams shoot really well against them, Jawun has a tendency to take the air out of the ball sometimes, there might be a defensive rebounding deficiency and they’re going to go cold from deep. But it was sweet to see Forte get cranking on Thursday (5/10 from three) as that was one of the few missing pieces thus far on offense.

The Cowboys get a monstrous test in the first game with a top 10 KenPom team coming to town next Friday in WVU. They’ll be ready, though, as Brad Underwood fittingly goes for win No. 100 against one of his mentors (Bob Huggins). And OSU’s 10-2 record in the non-conference portion of the schedule along with the way they’ve gotten those 10 wins has me giddy with optimism.

• Cam McGriff was out with hyperextended knee. Hopefully he can be back by next Friday.

• Can Mason Rudolph palm a basketball?

• Seeing Josh Holliday and John Smith together at games is pretty great, right?

• The Cowboys have forced every opponent to commit at least 15 turnovers, and have racked up at least seven steals in every game.

• Bryndon Manzer noted that Travis Ford slacked on weightlifting in the past but Underwood hasn’t. I feel like the biggest benefactor of that has been Jeffrey Carroll.

• How do OU and OSU let Rashawn Thomas get out of OKC. Dude is a baller!

• One of our PFB staff writers was at the game, and he said at one point Underwood yelled at Dziagwa: “”I don’t care how many baskets you make … BLOCK OUT!”

• OSU had 49 rebounds on Thursday. It never had more than 45 in any game last year.

Next game: Friday, December 30 against West Virginia in GIA