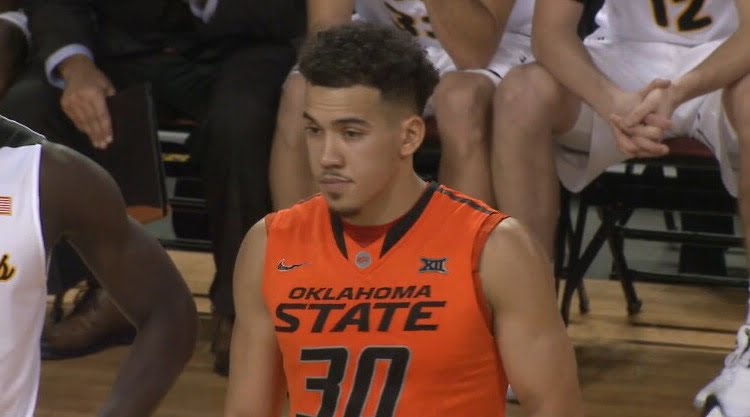 Trying something a little bit new tonight as I did an instant recap of the game here so let’s jump right into five thoughts on the best game Oklahoma State has played all season.

Carroll tied a career high with 22 points and chipped in five boards as well. Head coach Brad Underwood played four reserves to close out the first half (more on this in a minute) and Carroll carried the offense with his 8/10 performance from the field.

2. OSU can beat anyone when it shoots this well

The Pokes were 14/28 from three-point range which explains the 90+ points. It is the third time since 2010 that OSU has shot better than 45 percent from three (minimum 25 threes taken). There is another reason OSU scored so much, though. Its effective field goal percentage was 64 percent to 39 percent for WSU, and that’s because most of OSU’s turnovers forced led to buckets like this one.

Wichita State only turned it over on 17 percent of possessions (a small number for the Cowboys), but they made easy work of the ones they swiped and raced out to a big lead early, never looking back. Side note: the game was tied for 23 seconds, OSU led for the other 39:37.

OKC Dave noted on our podcast on Friday that Jawun still has a little Ford in him, and that’s been true so far this season. He gets a little AAU-y for my taste sometimes, but he can also put a game in his hand and pull the strings.

He did so on Saturday without as much of the iso ball. He was efficient (22 points on 16 shots in ~25 minutes) and productive (five boards, four assists, three steals). You can tell OSU can be good without him. With him though? They have a chance to be great.

Also, this video deserves its own 10 thoughts.

Brad Underwood trusted his freshmen. Our basketball guy Sam Aldrich will have more on this later, but I wanted to make a quick note of how important trust is. I had a high school baseball coach who used to use the phrase, “it’s all about trust” about 105 times a day. He would say it about anything: Baseball, relationships, school, whatever.

We were talking in Slack during the game about how absurd it was that Underwood closed out the first half with four freshmen on the court along with Carroll and about how a certain other head coach of a major program in Stillwater would never dream of doing something so “risky.” I loved it on Saturday, and I have a feeling I’ll love it even more come late February when OSU is up three in Ames and Forte and Hammonds are in foul trouble.

What a win. OSU completely imposed their will against a program who prides themselves on imposing their own will on opponents. So impressive

It was as thorough a performance as I’ve seen from OSU since maybe the Memphis game at home during Marcus Smart’s sophomore season. And to me it’s even more impressive that it came against Wichita State than maybe a more talented squad.

Here's a stat: Wichita State is 60-1 in home nonconference games since November 2008. Only loss was to the VCU team that made Final Four.

It is sometimes easy to rout a more talented team because they make mistakes and lay down. Wichita State is impossible to blow out. Especially at home.

• N’Guessan is better than Mitch Solomon right now. I’m not sure any rational person would argue that. The problem seems to be that neither player can stay out of foul trouble.

• Leyton Hammonds made an appearance. I was very wrong about how his college career would play out. If OSU can get him going, though, that would be a sweet benefit to an already-deep team.

• How good is it to watch an offense like this?

• I hope my kids are as excited on Christmas morning as Dizzy is for every made three.

Me when I think about this year compared to last year. pic.twitter.com/yLAmJkALPe

GIA on Thursday at noon (!) against Texas A&M Corpus Christi