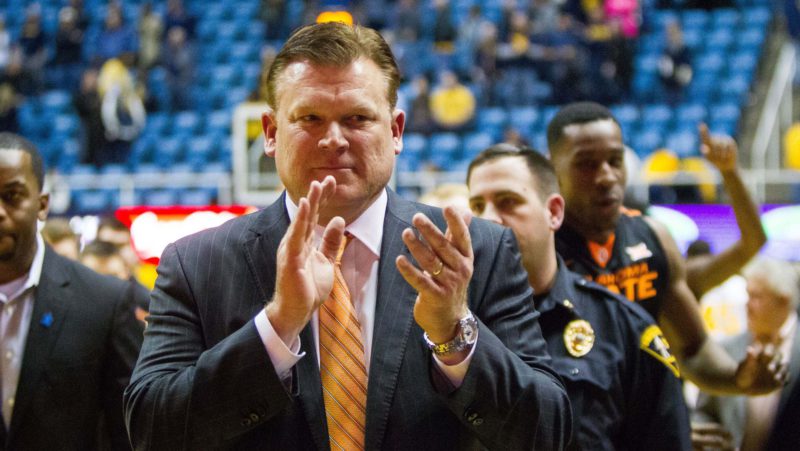 Oklahoma State is rolling and after five straight wins, finds itself just two games behind the third-place team in the Big 12. That’s not a typo. Let’s get into my five thoughts on a wild game in Morgantown.

1.The Cowboys Thrive With the 3

The Cowboys bounced back from a poor shooting night in Norman on Monday by starting off making their first five 3-pointers. They went 6-8 from 3 in the first half — including 3 of 4 by Jeffrey Carroll. The Cowboys finished 8-13 (62 percent). That’s the seventh time this season they have shot at least 40 percent from 3 and the third time they’ve shot above 60 percent.

The Cowboys have the luxury of having shooters all over. If you count Tyler Underwood’s 2-5, the Cowboys have seven players averaging at least 40 percent from three. That’s half the roster.

2. This team is bought in and it shows

The confidence level of Brad Underwood’s team is Trey Waters-high right now. They are learning how to win. Each game seems like a step in the right direction.

Underwood showed his team that he’s not afraid to change his own philosophies to fit their strengths. Not only does that build trust in their coach it shows his confidence in them. Part of being a good leader is setting clear expectations and Underwood has shown he rewards hard work and hustle. Look no further than the dramatic turnaround we’ve seen from Davon Dillard. Which leads us to …

This is no fluke. The brash sophomore has hustled his way from the doghouse to the penthouse in terms of playing time. He committed some silly fouls and turnovers on Saturday but Underwood still rode the sophomore for 25 minutes — including 16 minutes in the second half.

I mentioned those head-scratching turnovers.

But just when you’re about to scream at your TV, Dillard steps up and takes a charge that even Bob Huggins tried to imitate. Sorry Huggy Bear, your feet weren’t set.

His SportsCenter dunk was unreal but I thought the sequence above was the perfect microcosm to Davon Dillard’s game — and his best play of the night.

Dillard’s 25 minutes against West Virginia were a career high. Since his break-out game in Lawrence, Dillard has averaged 6 points and 4 rebounds in 14.7 minutes per game. Those numbers aren’t eye-popping but his intensity on both ends of the floor results in game-winning plays. Maybe the most unlikely of candidates, but Davon Dillard is an Every Day Guy.

This is just another feather in the cap for Brad Underwood. He has guys buying in and playing up to their potential (i.e. Mitchell Solomon).

4. The Cowboys are able to win ugly games.

After a hot-shooting first half, the Cowboys and Mountaineers both uglied it up in the second half. Three fouls apiece in the first minute and a half and 13 fouls in the first 10 minutes after halftime. This is the second straight game that OSU has been able to go on the road and play dirty but pull out a win — this one means infinitely more due to the level of competition.

Several times in the second half, the Mountaineers threatened to steal back the momentum but each time the Cowboys answered. Somehow OSU was able to lose the turnover battle (19-9) and be minus-20 in points off of turnovers and still win in a truly hostile environment. Again, learning how to win.

5. Is Oklahoma State a tourney team?

If the Cowboys needed a signature win, they now have it. They went on the road and stood toe-to-toe with 7th-ranked team in the country. This is a different team than the one Bob Huggins faced in Stillwater a month ago.

With the prolific offense Underwood puts out on the court, the Cowboys simply have to show up defensively to have a chance to win most nights. I would also say they have to avoid turnovers but apparently not.

With eight games remaining (five at home) the Cowboys should be able to pull off a 5-3 or 4-4 finish. That’s losing to Kansas and Baylor at home and Iowa State in Ames, with wins over Texas, Oklahoma, Texas Tech at home and winning at TCU and Kansas State. You lose one of those you should win, and you’ll still probably get in.

• The Cowboys out-rebounded the Mountaineers 30-16 while fielding a team that is ranked 217th in average height by KenPom against the No. 54 team in that category.

• The Cowboys have now won three-straight Big 12 road games. That hasn’t happened since the 2012-13 season.

• The Cowboys held West Virginia’s starters to 28 points. The reverse to that stat is getting outscored in bench points 47-26.

• Jeffrey Carroll was unreal in the first half (17 points on 6-9, 3-4 from 3) but you could tell the Mountaineers were trying to deny him the ball in the second half. He was just 1-2 for three points after halftime.

• The Cowboys were aggressive in the second half getting to the line 20 times to West Virginia’s eight.

• On two consecutive possessions,  OSU fouled Lamunt West on a 3-pointer. The first time he made 2 of 3 free throws. The second, he completed a 4-point play. It took OSU from up three to down three in a few seconds. That could have been a big turning point in the game but (again) OSU answered.

The Cowboys have Baylor at home on Wednesday night at 6:00 p.m. CST.