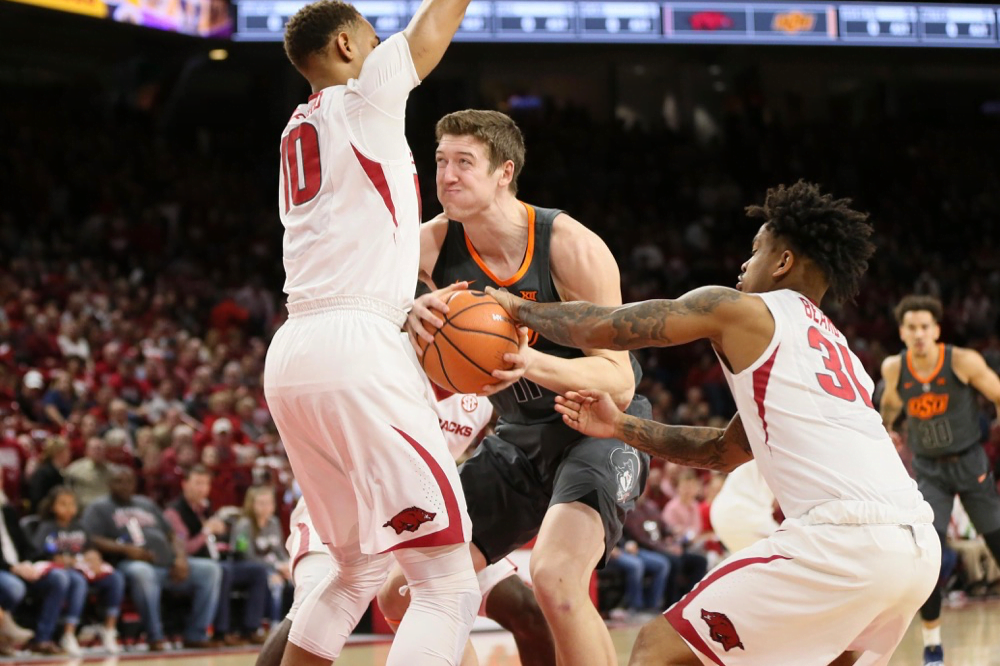 Arkansas beat Oklahoma State 66-65 on Saturday in Fayetteville after the Pokes went 5-for-22 from the field in the second half and made just 3 of their last 20 shots overall. The loss means OSU is still winless on the road, despite another halftime lead (more on that in a minute).

OSU was led by a career-high 17 points from Lindy Waters. They also got 8 points, 10 rebounds and 3 assists from Cam McGriff as well as 10 points each from Brandon Averette and Mitchell Solomon.

Mike Boynton’s squad was without Kendall Smith (flu) and Tavarius Shine (wrist) and still took a 14-6 Arkansas team down to the wire. The Hogs’ first lead came late in the second half, and they led for just 6:38 of actual game time. Daryl Macon led all scorers with 22 points. He was their only player in double figures.

OSU has now lost to Baylor, Kansas State, Arkansas, Texas Tech and OU on the road. They led everybody but OU at the break. They’ve lost all five of those for a variety of reasons — on Saturday it was turnovers, stamina and going 3 for 20 coming home. Regardless, you have to figure out how to close. It’s the opposite problem OSU’s football team had last year — can you imagine combining those two squads? Hoops to open the floodgates and football to pummel schools into oblivion. Maybe Boynton and Gundy need to trade notes.

It goes without saying that OSU looked run down late. They missed Kendall Smith (flu). Averette and Waters combined for 9 turnovers, and Arkansas didn’t match those (they only turned it over 9 times total).

Every Averette shot was short and the 5 for 22 bit from the field speaks for itself. I guess the result on Saturday is actually encouraging if your perspective is that OSU was without three of their presumed top seven rotation players coming into the year (Smith, Shine, Dillard).

3. OSU got to the line late

On the flip side, the only reason OSU was in the game was because it got to the line 17 times in the second half. That has to be encouraging for Boynton, considering he’s been preaching tenacity to the rim like Joel Osteen preaches bountiful blessings for all.

I thought Crime Dog was fantastic throughout. He scored 8 points on just 5 field goals and got every loose rebound within shouting distance. He’s such an asset off the bench, and he can play a number of different positions offensively. Defense is a little bit of a different story, but I’ll take multiple McGriffs on my team.

Cam McGriff gets wayyyyyy up for this rebound #okstate pic.twitter.com/dMznwDZXc0

OSU’s two best shooters (arguably) in Jeffrey Carroll and Thomas Dziagwa went 3 for 19 from the floor and 3 for 13 from 3-point range. OSU was 9-0 coming into the game when holding opponents under 70 points, and they more or less did everything they needed to do except for hit shots over the last 20 minutes. That has to be incredibly frustrating to Boynton who, as Carson pointed out, has the makings of a really good coach in the future.

Mike Boynton draws up a beauty. He’s draw up more great plays this season than Travis Ford drew up in 10 years. Players have to make plays. #okstate

• If you had a “Trey Reeves will get real minutes and score in the first half of this game” ticket in Vegas, please collect your 5,000-1 winnings.

• N’Guessan’s hair looks awesome. Side note: I love that “N’Guessan’s” has two apostrophes.

• I would not have thought 17 points was a career high for Waters.

• Who do you want on FT line down one with one second left? Solomon has to at least be in the conversation, right?

• The refs went to the monitor like it was running a Breaking Bad episode in the second half that they had never seen.

• Good luck on those last two out-of-bounds calls. I watched each multiple times and had no idea. OSU got the benefit of the doubt on both.

Good to see 2 legends in Fayetteville as Nolan Richardson and Eddie Sutton both at Bud Walton Arena. pic.twitter.com/RNqWAVNNXd

• Every college basketball team seems the same to me. Like, it feels like they should all be 14-7 with a 4-3 record in conference play. I guess OSU hasn’t played KU yet.

Oklahoma State and Arkansas need to play each other every year… in every sport. Would be a GREAT rivalry. Congrats to both clubs on a fun game.

• You have to hit Solomon low. If you hit him more than nine feet from the bucket, there’s no prayer.

Solomon is dominating down low. 18 points in the paint so far for #okstate pic.twitter.com/YFulwAaLDw

• Averette doesn’t do a great job of feeding you where you can shoot it right away.

Espn interviewing the SEC commissioner during the #okstate game is a joke. Just call the game. This isn’t an exhibition.

• How did we not get any Gavin Gundy shots?

• This is the “Charley Hoffman would be a 48-time major winner if majors were one round long” of college sports.

OSU might be a top 10 team if they only had to play 20 mins. Gusty first half performance.

It sounds like the PA announcer is saying "Thomas D-Zoggy" when Dziagwa enters the game.