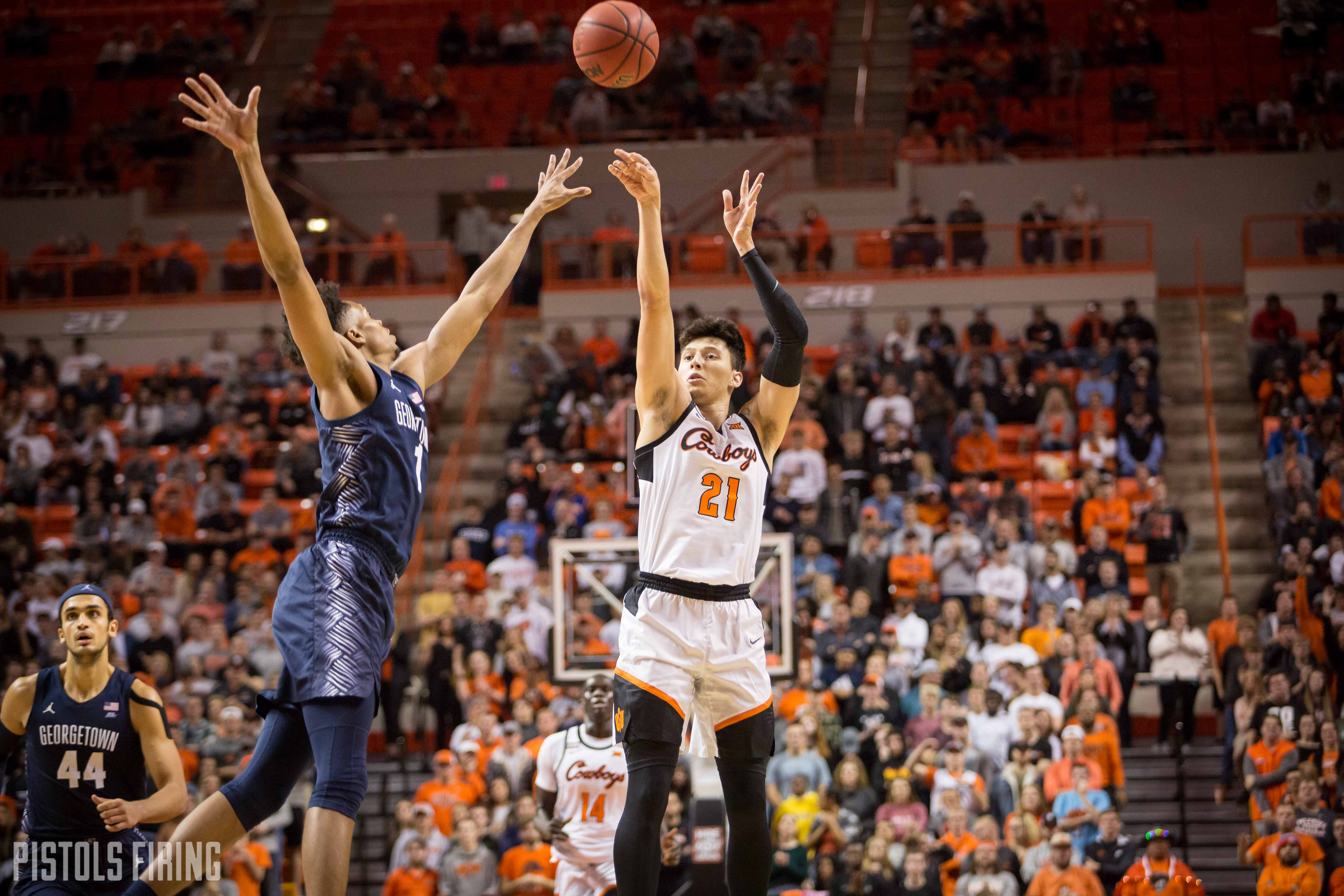 On Wednesday night in Gallagher-Iba Arena against a 4-3 Georgetown team, Oklahoma State failed to do what it hasn’t done since the 2006-2007 college basketball season: Win its first eight games to start the year.

OSU dropped its eighth contest 81-74 and fell to 7-1 on the young season. Georgetown — playing without two of their top five scorers — got 33 points from guard Mac McClung and another 19 from big Omer Yurtseven. The Hoyas outlasted a nice comeback run from the Pokes in the second half that had GIA whipped into a mini-frenzy when OSU took the lead 53-48 with 12 minutes to go. Georgetown closed them out by hitting six 3-pointers down the stretch.

For OSU, Lindy Waters had 29-6-6, Cam McGriff had 20-6 on 7-of-8 shooting from the field and Chris Harris chipped in 10 points and 3 boards. OSU was without its best player, Isaac Likekele, who was out with an undisclosed illness.

#OKState will be without Isaac Likekele tonight who is day-to-day with an illness.

Let’s jump into my five thoughts on this game.

Can you imagine what would have happened to past OSU teams that lost their best player slash point guard? And I get it, Georgetown was missing two of their better guys as well. But Ice makes everything go for OSU on both ends. To say OSU wasn’t as good defensively without him out there is to say that Bedlam football has been a bit one-sided in recent years.

Avery Anderson seemed overwhelmed, and OSU just doesn’t have any other perimeter defenders to, you know, disrupt the guy going full Will Whittington from deep.* On top of all of that, Yor Anei played just 17 minutes, was nonexistent in the first half because of foul trouble, fouled out and didn’t have a rebound. So you get zeros from your top two guys, and you’re probably going to take an L to a lot of top-100 teams.

Was OSU out over its skis a little bit after pasting Ole Miss in the Laquon Treadwell revenge game last week? Sure — and it’s up in the air whether they’re a real top-25 team — but this is college hoops, not college football. SFA beats Duke at home. Nobody is impervious, and when your top two defenders (and players) bring essentially nothing to the table, the loss is at least understandable.

*This is so deep a cut that if it clicked with you immediately you might have an Oklahoma State basketball problem.

I hear you. When the light bulbs rattled in 74 or 71 or whenever it was, that’s when GIA was juiced. I don’t disagree. But for a program that’s going to be as good as its recruiting will allow it to be, it’s important to have big-time home games at all times. This one felt big-time. I know both teams were without their PGs, and Georgetown isn’t exactly lighting the world on fire, but they’re a top-70 KenPom team and the place vibrated a little bit in the second half.

Anyway, it was incredibly fun to experience a loud, electric college basketball game with OSU as one of the final 17 teams in the country without an L at the beginning of December. That matters for this team, but it’ll matter a lot more if it can affect future ones.

Also (because I don’t know where else to put this): David Einstein pointed this out in our game thread but the Ewing Theory went meta tonight as Georgetown won without one of its best guys who might have also doubled as problematic within the culture of their team. With Patrick Ewing as the coach!

OSU got a fat 2 points from their bench on Wednesday from the No. 22 Boone (Kalib). The other 72 were from the starters. I thought Lindy was pretty outstanding throughout.

He played 35 minutes, hit half his shots, made three triples and gave you a bunch of big buckets when you needed them. Throw in a team-leading six assists and team-leading six boards, all while going back to his point guard days, and it was a show. I don’t know if he’s underrated, but I do think he’s a little underappreciated just because of how bumpy OSU has been in the last few years.

OSU took 32 3-pointers on Wednesday, which is one of its highest outputs in school history. Here’s the list coming into tonight. 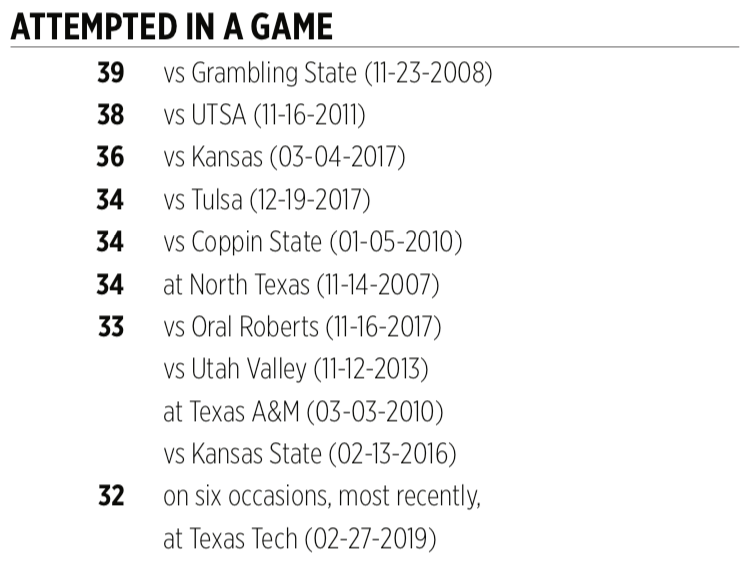 I didn’t have a huge problem with it when they’re hitting 38 percent. It doesn’t always look great — and I would prefer the Boones or Cam doing low post stuff — but it’s a big portion of their offense, especially with Ice out and Yor not hitting on all cylinders. That probably changes if Yor is doing Yor things. Also, this is 2019 and it’s kind of just going to be how basketball is played for the most part. Blame Steph.

The bigger issue there was that OSU got housed on the boards and was not electric on defense. We’ll talk about the rebounding thing first. Again, Yor and Ice had 15 boards against Ole Miss, and they combined for zero tonight. Georgetown clipped them by 14 on the glass. So there you go.

I do think some of their defensive prowess in the first seven games was fool’s gold. The stuff I watched was a lot of tenacity on defense but also a lot of missed 3s from other teams. So again, maybe out over the skis a bit.

This just isn’t a team that’s going to light you up on the offensive end. When they win, it’s going to be because they play great defense, get their athletes going in transition, get a Hakeem move or two from Yor and couple of arrows from Dizzy.

The sky isn’t falling. Ice will be back — I’ve heard many timeframes here, but we’ll keep you updated — and OSU will be fine. Good teams lose to teams that aren’t as good. It is a thing that happens. Every night in college hoops.