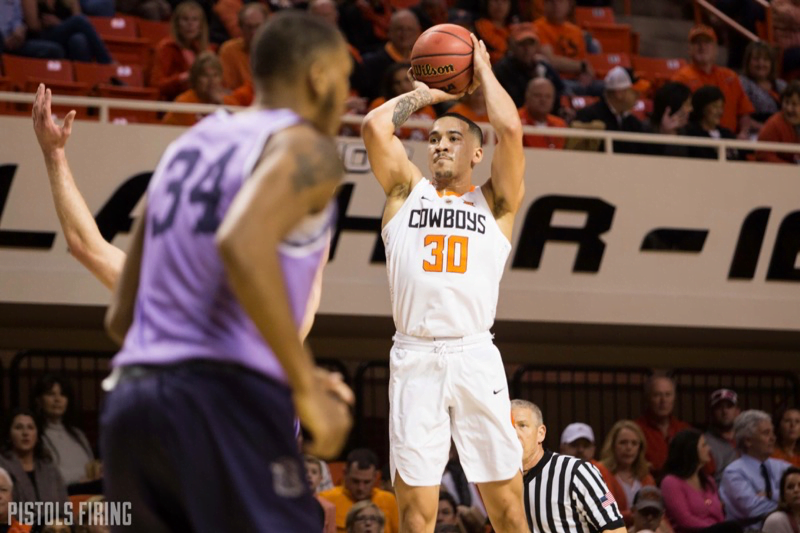 Happy Valentine’s day, all. Kansas State pummeled Oklahoma State 82-72 in Gallagher-Iba Arena on Wednesday night as the Pokes lost their third consecutive home Big 12 game and fell to 5-8 in conference play. The 10-point final margin doesn’t even come close to telling the story as K-State touched off a football and basketball super sweep (all three games!) and moved to 7-6 in the Big 12. The victory also moved them into fourth alone in the conference standings.

The Wildcats were led by Barry Brown, who scored 25 points and now has 63 in two games against the Cowboys on the year. Three other Wildcats finished in double figures. For OSU, Kendall Smith had 16 points and Jeffrey Carroll had 13, but they took a combined 29 shots to get those 29 points. Cam McGriff added 13 points and 7 rebounds.

Incredibly, OSU took 14 more shots than Kansas State but made one fewer. The Wildcats shot a scorching 55 percent from the floor, while OSU could muster just 42 percent (and made 18 of their last 27 shots just to get there).

Five thoughts. Let’s get to them (and move on as quickly as possible).

1. First half defense was atrocious

And then it didn’t get better for the Cowboys. Here are Kansas State’s numbers by half on 2-pointers, 3-pointers and overall.

There was just no intensity on that end from Boynton’s squad. It honestly looked like they had 3-4 guys on the floor for most of the night. Or like they were playing one of those underground mid-October games where coaches were stepping in and instructing between plays and the only people in attendance were SIDs and a smattering of parents. Here’s a GIF to sum up the defensive effort for OSU.

KSU ended the game with just 8 turnovers, which is tied for the fewest OSU has forced up all season (all losses, by the way) and an indication of what the pressure was like on Wednesday evening.

OSU out-rebounded Kansas State on the offensive glass 16-2 and outscored them 22-5 on second-chance points, which is kind of unbelievable. But it also might have buried the lede in a way, as Blake Huddleston smartly pointed out on Twitter.

The crew at PFB could probably put together a half-court offense that moved as much as OSU’s (it’s basically give it to Kendall and ? at this point). And Bruce Weber forced them into that (which leads to thought No. 3).

You're right. And if I'm playing OSU, I probably sacrifice the battles for offensive boards to make them score in halfcourt, too.

To drive the transition vs. half-court numbers home, this from Hoops Math should do it. In the far left column is how OSU starts its possessions and how quickly it gets shots off. The middle column is the breakdown between those. The far right column is how efficient it is with each.

The Cowboys had just 9 fast break points against KSU, which is how you notch 7 assists in a 40-minute game. It also doesn’t help when the other team apparently knows your plays.

K-State's Xavier Sneed: "We just knew what they were running, so we knew the right spots. … We shut down some of the plays they normally run."

OSU has (somehow) avoided these runs on the road in recent games, but they can’t stop the bleeding at home. They’re also not talented enough offensively to dig themselves out, and, at least on Wednesday, didn’t seem to care enough on defense to weather the storm.

We can joke about how Oklahoma State would be better off playing all of their games in Allen Fieldhouse or whatever, but here’s the bottom line: With the NCAA Tournament in sight, OSU dropped two straight steaming piles of poo in Eddie’s house. Those wins at WVU and Kansas mean nothing if you’re still going to go 6-12 and play in the NIT. Well, not nothing, but they’re empty. Like running 3 miles on a treadmill and then going home and eating a 96-pack of nuggets from Chick-fil-A.

I don’t know what the specific issue is — I don’t know if anyone, including Mike Boynton, knows that — but big-time wins like KU and WVU are a double-edged sword. You lose the ability to say, “well, we were just terrible, that’s why we lost at home to Baylor and TCU and Kansas State in the manner that we did.”

For as much as we’ve praised this team for getting to where it has this season — and to be sure, the story’s not over yet — the last few games in GIA have been pretty lousy. You’re not going to road-win your way into March, but you can certainly play your way out of it at home. And for now, with just five games left, it feels like that’s exactly what Oklahoma State has done.

Other notes on Wednesday’s game.

• Dizzy getting an offensive rebound is legit unsettling. Like, I wasn’t sure what happened at first. I think he had one at West Virginia as well.

• I will never not think the announcers are saying D-Wade about No. 32 on Kansas State. Never.

• I loved KSU’s uniforms. Come at me. Get some new shorts, but definitely keep the tops.

• If you’re looking for a single image that sums up the night, here you go. No. 34 has the ball, by the way. 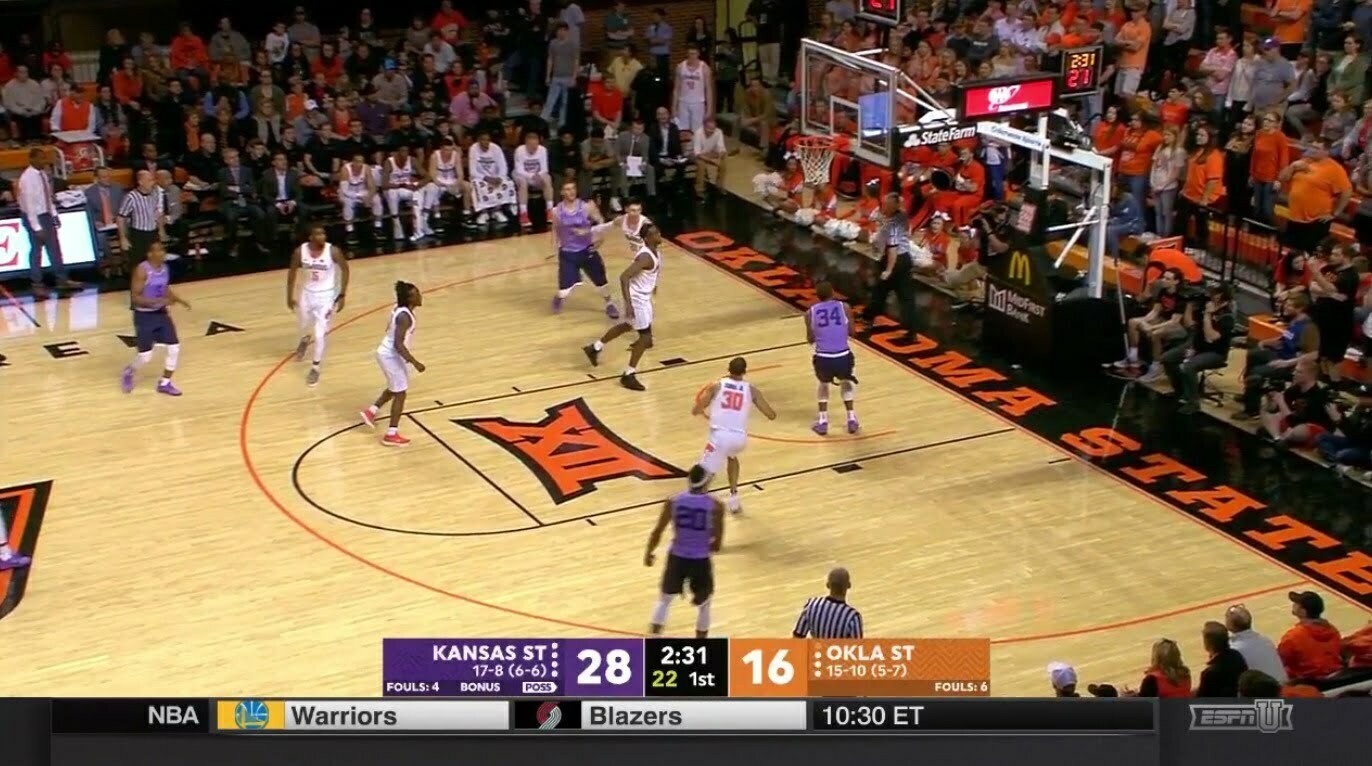 • Boynton took his jacket off at 14:10 in the second half in case you were wondering.

• It looks like Clip finally got a clip, and it was probably for the best. RIP Snoop Carroll.