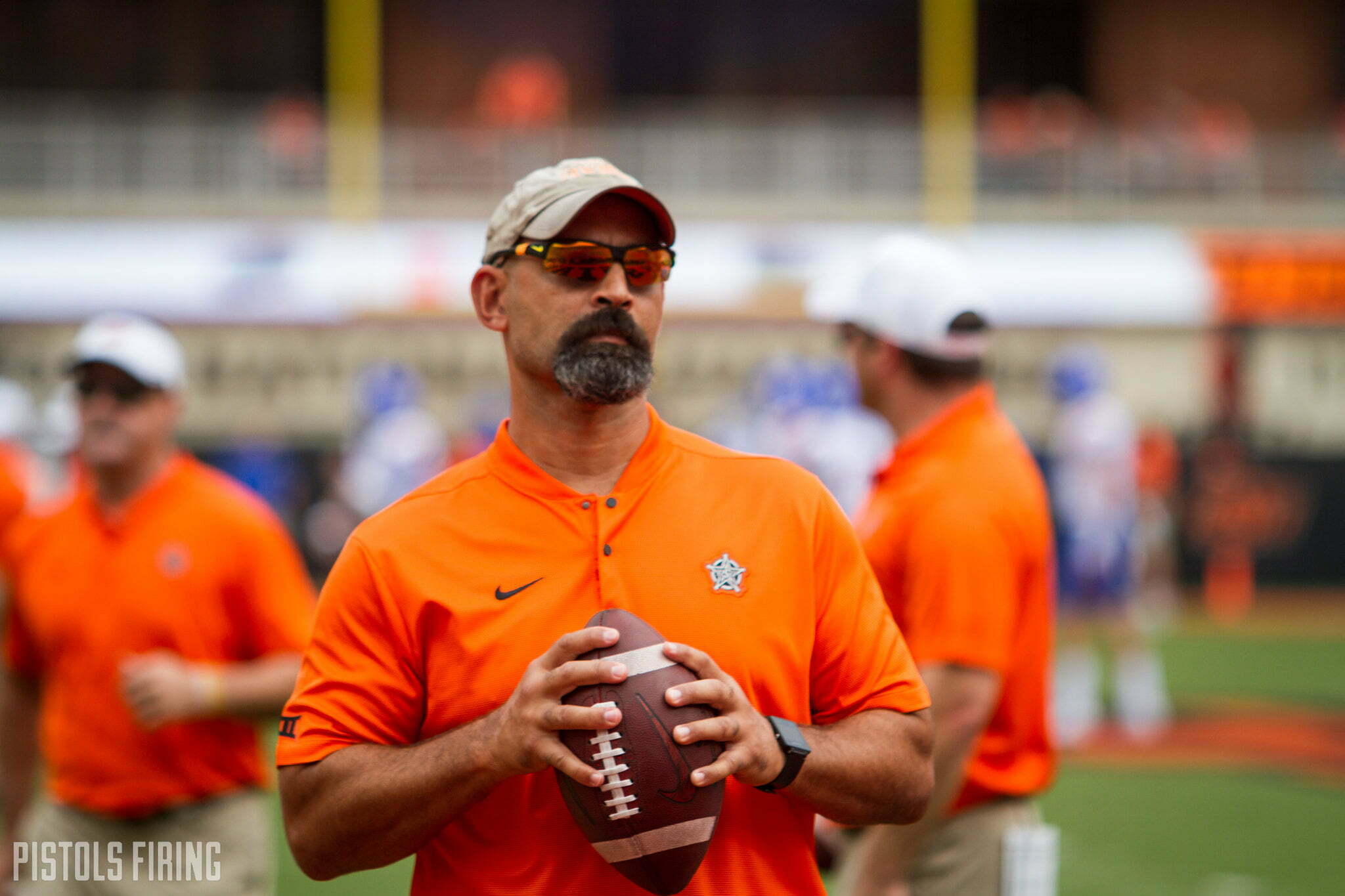 I think maybe I just took my first deep breath since several hours before the title game on Monday night. Carson and I were in the middle of a podcast when the Chuba-car dealership thing happened, then Kasey Dunn was announced, then Chuba announced, then Mike Gundy turned into Tony Romo, then the title game happened. A whirlwind week.

But before we move on to the end of January and on into the rest of the year, I wanted to take a quick pause and give five (shorter) thoughts on Kasey Dunn’s promotion to the offensive coordinator position.

The Dunn-OSU relationship for the past few years has felt a little like our relationship with subscription services. Oh, you want to cancel your DirecTV plan? What if we give 8,736 channels for $21.99 a month.

Oh, you still want to cancel your plan? We will give you 11,393 channels, mail 150 DVDs to your door and get you on the phone with Tom Hanks for a 15-minutes discussion of Castaway, please renew for $17.50 a month.

I mean, that’s what it felt like, right? Dunn, it seemed, at multiple points tried to move on to the next phase of his career, and OSU wouldn’t let him. More money (he made more than Sean Gleeson last year), longer titles and a bigger role in the organization. For each of the past few years. That had to terminate somewhere, and that place it appears is as the offensive coordinator.

I wonder if that was the only card they had left. The reports that he was going to UNLV with Marcus Arroyo were substantial. I mean, he was gone. Gone gone. There was stuff out there about how it was cool that he was just able to be around for the bowl game. And yet … here we are. I think this was probably the only way this was ever going to happen.

OSU’s best recruiter over the past few years has probably been Dunn. I don’t mean the position where they’ve had the most success — although that is probably also true — but rather, landing top-tier talent at the prep level. Two of OSU’s last three top recruits have been wideouts (Tylan and C.J. Moore). They’ve had four-star guys in three straight classes (2020 still pending), and it’s paid off for both him and the school.

My question now is whether his recruiting efforts expand outside of that. It’s an off-the-beaten-path move in this era of college football to have a WR coach be your offensive coordinator and a QB coach doing his own thing, and I’m curious with the expansion of his role in actually directing players on the field if that will also be true off of it (on the recruiting trail).

Remember when Sean Gleeson was locked out of the Oregon State press box, and Dunn started running the show because he could actually see what was going on on the field? That, to the best of my knowledge, is all the evidence we have of Dunn exclusively calling plays. Here’s that drive to start the second half.

I don’t know how much we can learn from one drive in a non-conference game back in August, but as I watched the highlights from that game, it made me long for what that offense was compared to whatever it was the rest of the year. Night and day. Oil and vinegar. Good and … not as good. This has nothing to do with Dunn and is probably tangential, but that offense — the one in Corvallis — looked Big 12 contender-worthy. Alas, it lasted but a game.

This is related to the note above. It’s basically an open secret at this point that Gundy tinkers more than Ben Franklin in his prime. He can’t help himself. I get that. It’s part of who he is. It’s probably part of the reason he’s brought in younger, less experienced OCs like Mike Yurcich and Gleeson. He can train them and he gets continuity, but he also gets the final call and knows he can meddle whenever he wants to meddle — both during the week and during games.

Dunn is different. He’s been around for a decade. He’s seen everything there is to see about the program and about Gundy. When Gundy comes in the room or jumps on the headset, it’s not going to be the same as it was with Yurcich (early) or Gleeson. Maybe it won’t be exactly the same as it was with Monken and Dana who, as one source told me, basically told Gundy to move on to the next room or channel on the headset, but I think this will ultimately be a good thing for OSU.

I’m curious to see how this goes. Here are the salaries for OSU’s 10 assistants in 2019, according to USA Today.

I would imagine new QBs coach Tim Rattay will come in around $300K (guessing there), which means there would be a lot left over between the difference in his and Gleeson’s salaries to either bump everyone or move Dunn closer to $1 million. Mike Yurcich made $800,000 in his final season as OC. I’m intrigued to see if Dunn approaches that.