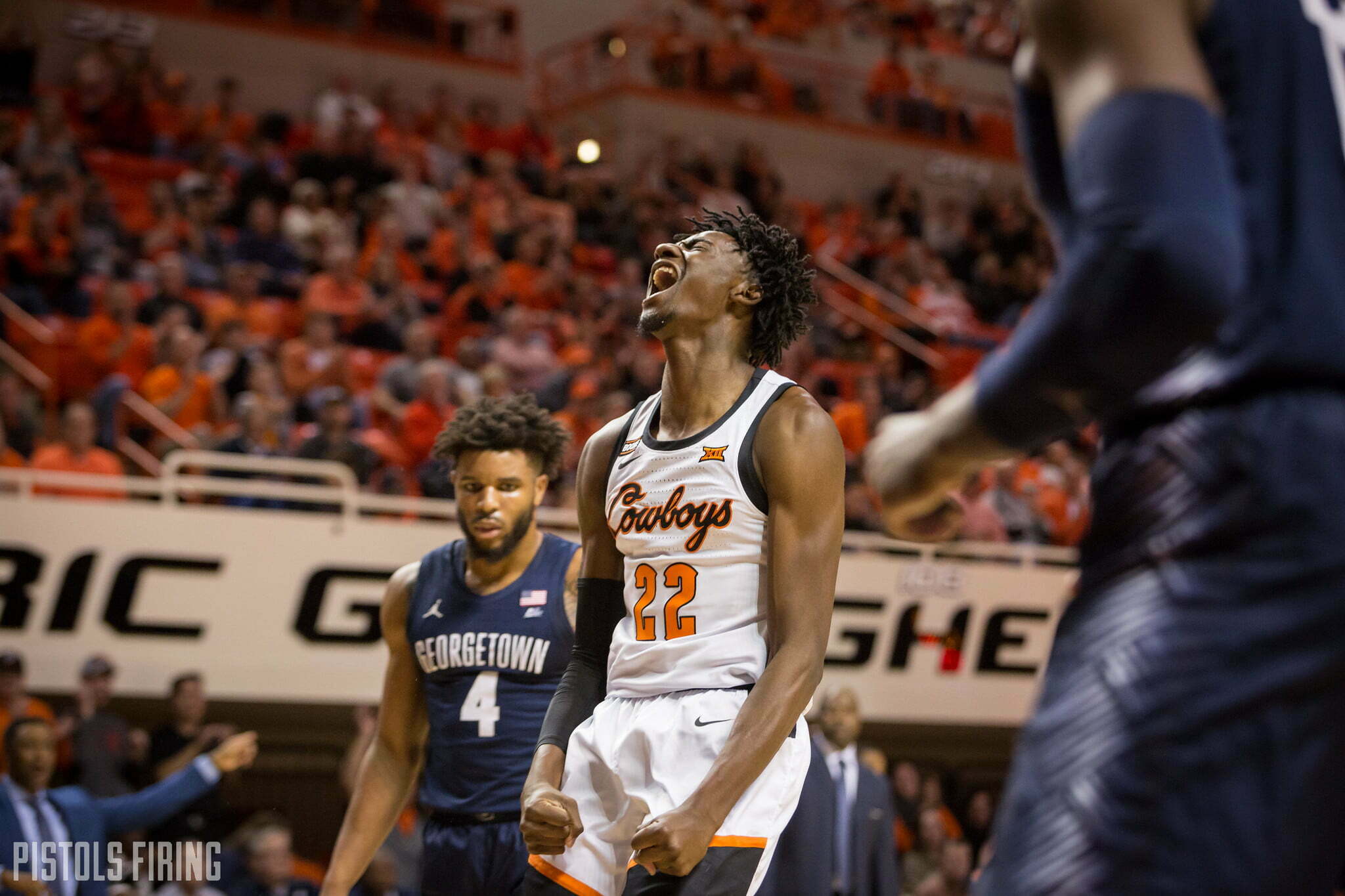 STILLWATER — In what felt more like a game of rugby than a basketball games at times, the Cowboys failed to pick up their first Big 12 win.

Oklahoma State fell to West Virginia 55-41 on Monday in Gallagher-Iba Arena just two days after getting thumped in Lubbock. OSU is 0-2 in Big 12 play. Here are five thoughts on the most recent loss.

That was the most physical basketball game I’ve seen.

Ugly is what a lot will call it, but it almost had its own beauty in that it felt as if 10 players were on the court fighting for 40 minutes. This game had 38 personal fouls, 40 free-throw attempts, 39 turnovers and about quadruple the jump-ball calls to a normal game.

“It was (the most physical game I’ve played in),” freshman point guard Avery Anderson said. “They play very physical. It was something different for me, but we just have to keep battling and hopefully next time we’ll battle even more and come up with a win.”

Without Thomas Dziagwa, who missed the game with the flu, OSU coach Mike Boynton started Jonathan Laurent in his place to help with the deficit in size his team had going in. The Mountaineers start one player shorter than 6-foot-7, and it’s a muscular bunch at that.

At 6-foot-10, 210 pounds, Hidde Roessink played a career-high 19 minutes of grueling, physical basketball. He didn’t have the best night statistically, but it was probably invaluable experience for him. I doubt many games go that way in Europe.

“None of those (freshman) have played (against guys like that),” Boynton said. “It wasn’t even a basketball game in (Roessink’s) mind. They don’t play basketball like that. It was a physical game both ways. We tried to match their physicality, and I thought for the most part, our kids did respond to the challenge.”

2. Some of It was West Virginia…

As frustrating as it was for OSU fans to watch their team be held to 41 points, it’s important to remember that West Virginia entered the game ranked fifth in the country in KenPom’s adjusted defensive efficiency.

This is what the Mountaineers do. The Cowboys are just one of two teams to not hit 50 points this season against West Virginia, but seven teams now have failed to hit 60 against Bob Huggins’ hounds.

Isaac Likekele’s impact was lessened for the second game in a row. Jermaine Haley, who is 6-7, guarded Likekele for much of the night. Likekele had five points on only two shots. He also had just two assists and eight turnovers.

“Not a lot of people have 6-7 point guards that can guard him, let’s be honest,” Boynton said. “I think part of what we’re dealing with is, what I tried to warn him against and everybody, he played a game on Nov. 29 and did not play again until Dec. 29. He’s gotta get back in rhythm.

“He didn’t play particularly well tonight, maybe I should’ve took him out earlier, but he’s gotta work through that. He’s our guy. I’m not turning my back on that kid. He’s given us everything he has for a year and a half. He’ll find his rhythm again.”

OSU started 0-for-16 from 3-point range, and some of those were good looks.

Dziagwa missed his first game since March 17, 2017. Say what you will about Dziagwa, but a team isn’t starting 0-for-16 from 3 with him on the floor.

Although a lot of the 19 OSU turnovers were West Virginia-forced, some weren’t like the time OSU had some momentum midway through the second half and Anderson tossed an inbound pass over Roessink’s head before Roessink was looking that landed in the front row.

It was a bad shooting night for the Cowboys on a night they couldn’t afford one. Off the top of my head, I’d say at least half of OSU’s first 16 3-point attempts were open looks. If they hit four of those, things could’ve, should’ve, would’ve looked different.

OSU also went 12-for-20 from the foul line. Not the worst game in school history, but a few of those misses were the front end of one-and-ones.

I’m not sure anyone anticipated shooting being this team’s downfall, but it has been two games into conference play.

Kalib Boone didn’t check in until there was 13:03 left in the game.

In his eight minutes, Boone scored four points on his team-best 67-percent shooting. He also had two rebounds and a block. He did his best to amp up the GIA crowd with arm waves and floor slaps on defense, and he nearly got into a fight with Derek Culver. That’s a productive eight minutes.

A few weeks ago, Boynton pointed to some practice inconsistencies as to why Boone’s time on the floor was limited.

“It’s just inconsistent, and it’s not his fault,” Boynton said Monday. “I love that kid. He’s gonna be a really good player for a long time for us. He loves everything about being a part of this program. He just doesn’t know yet how hard it is to become a really good player at this level. And that’s our job.

“… He’s gonna become a really good player. He has to learn what it takes to become that consistently, and it comes in practice every day.”

5. It Was Better, Not Great

This wasn’t the 35-point throttling the Cowboys’ suffered against Texas Tech two days ago.

In that game, the white flag seemed to be waving early on in the second half. Sure, OSU scored only 41 points on 48 shots Monday night, but there wasn’t any quitting going on. It felt as if the Cowboys felt they could win until there was about a minute to go.

Surely there isn’t another game this year where OSU, a half-decent 3-point shooting team, goes 1-for-20 from deep. Defensively, OSU was miles better than it was Saturday. The Pokes were just minus-four in rebounds to the best rebounding team in the conference.

Yes it was ugly, but it was the tiniest of steps forward.

“Welcome to Big 12 basketball,” Boynton said. “I think at the end of the day, we just got beat tonight. I don’t want to make it sound so simple, but the other day Tech won a game by a much larger margin and I didn’t think we competed for 40 minutes in a way that was necessary to really give us a chance. I was more disappointed, in some ways, that I felt like we let go of the rope about a quarter into the second half.

“You can say, ‘Hey you lost by 14 tonight,’ but I thought defensively we did a lot of really good things. We forced 20 turnovers. We hold them to less than 40-percent shooting, and we hold our own on the glass against what I think is the best offensive rebounding team in the country.”