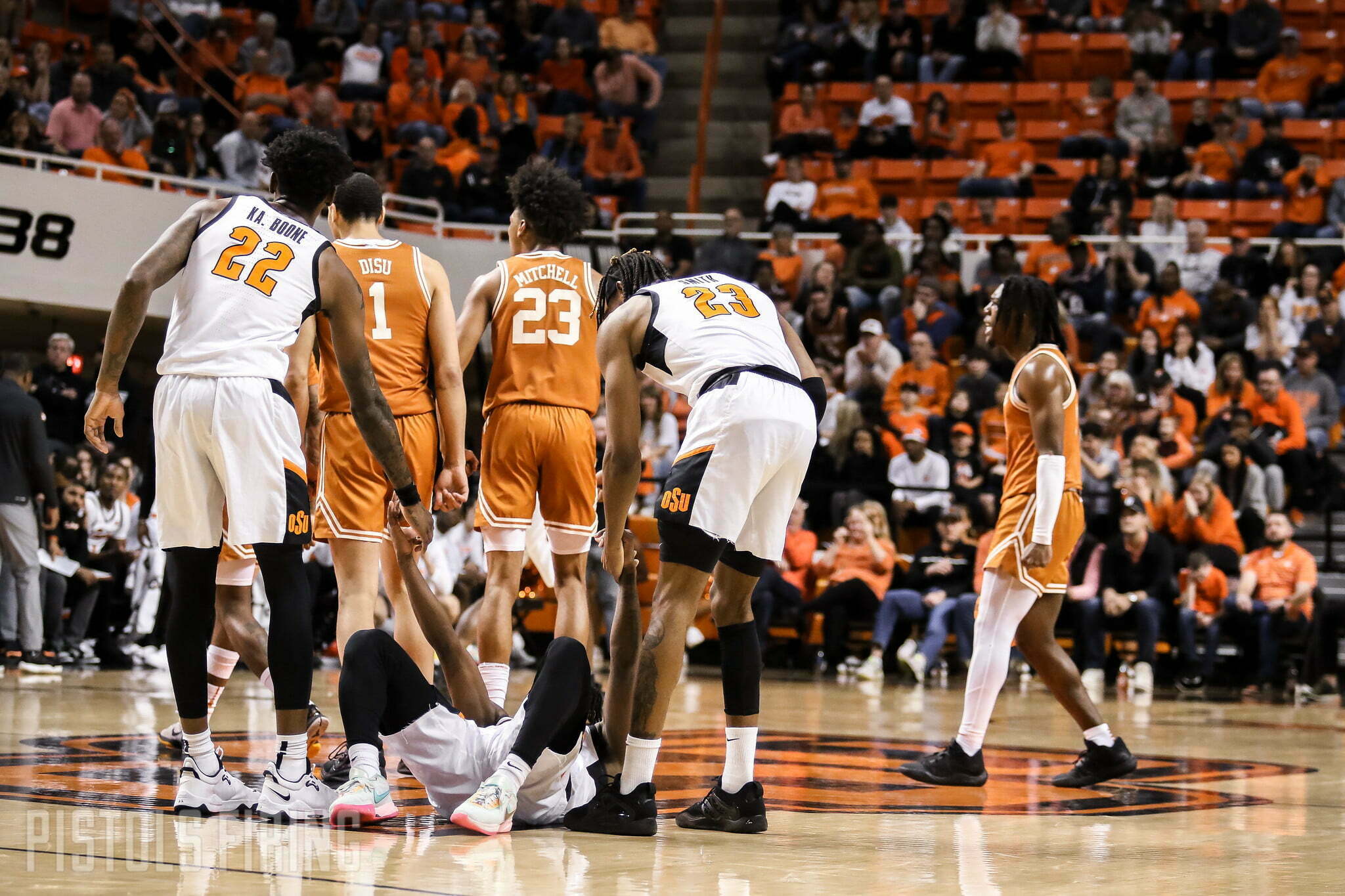 STILLWATER — The Cowboys had a Top 10 team reeling in front of them, but they couldn’t finish the job.

Oklahoma State fell to No. 6 Texas 56-46 on Saturday in Gallagher-Iba Arena. It was an ugly first half in particular, but the Cowboys’ defense was able to keep them in it. But the offense struggled mightily to take advantage of that solid defensive play. Here are five thoughts on the game.

The Cowboys scored 67 points in their first two games of conference play, but didn’t come within 20 points of that standard Saturday.

Bryce Thompson and Avery Anderson, the Cowboys’ leading scorers entering the game, were nullified, scoring just five points apiece while combining to shoot 21% from the field. Kalib Boone was the only Cowboy who scored more than seven points.

“We struggled today,” OSU coach Mike Boynton said. “I think there’s a little bit of — and I think it’s well-deserved, we haven’t been the Golden State Warriors in my six years as a head coach — but we’re better offensively than we’ve been. People don’t want to probably accept that because there are nights like this that still show up.

“… I don’t want to disregard the question because I’m not defending 46 points. but I’m just telling you that our offense is better than it has been. Today’s more of an anomaly. We’ve been pretty close to 70 points. We just went on the road and had a pretty good scoring game against one of the best teams in the country [Kansas] on their floor. So, we’re capable. It’s just a matter of mental toughness, ability to execute and then as a coach just gotta continue to put the right guys in position to get shots.”

The Cowboys had been better from the foul line this season, but they had a relapse to struggles of the past on Saturday.

It was a team effort, as well. It’s not as if Moussa Cisse — who missed Saturday’s game with an ankle injury — was the only player getting to the line. Avery Anderson missed three. Caleb Asberry missed two. Woody Newton missed two. Bryce Thompson missed one. Quion Williams missed one. It was contagious.

“To me, free throws are about toughness,” Boynton said. “We’re a better free-throw shooting team, certainly, than we showed. We’ve had these games before. Unfortunately, they kind of kill your rhythm — especially when it’s guys who you’re used to seeing [make them]. You kind of turn your back and start thinking about what’s next and not worrying about trying to figure out a way to get a rebound on a free throw.

“I’m confident that those same guys can step to the line and make them the next time they’re out there. It’s just that today was one of those days they didn’t go in.”

This is the first time No. 6 Texas hasn’t scored at least 70 points in a game this season, but even with the Cowboys turning this into a dogfight, the Longhorns found a way to win.

Texas scored 103 points in a loss earlier this week. If someone would’ve said Texas would’ve gotten held to 56 points on the road, it would be hard to imagine the Longhorns would win that game. But it happened.

This is undoubtedly a missed opportunity for OSU. If things are tight come tourney time, this one will sting even more for OSU. The Cowboys had a Top 10 win right there for the taking, even without Cisse, but they just couldn’t get the job done Saturday.

“I put a lot of stock into every game,” Boynton said. “I always have the big picture in mind. I don’t assume when it comes to the end of the season that, I know a lot of people talk about teams getting credit for not playing with their best guys one way or the other, I’m not taking that chance. We need to do everything we can to make it undoubtable that we are one of the best teams because I’ve got enough history here to not assume that will be taken into account in the end.”

It’d be hard to imagine what this game would’ve looked like for Oklahoma State had it not been for Kalib Boone.

Boone had a game-high 16 points on 6-for-9 shooting. It was also his third career double-double, as he brought down 10 boards, and he tied a career-high with six blocks.

Boynton has sought consistency from Boone in his senior season. He scored only two points in the Cowboys’ conference opener. This is his seventh game in double-figures, but he also has four games this season where he has scored five or fewer points.

“He played well today,” Boynton said. “Let’s get that on the table, but at the same time, if we can get what we got from him today 80% of the time vs. closer to 50, then this team can go to a whole different level.”

5. An Update on Cisse

For the first time this season, Boynton was forced to switch up his starting lineup with the absence of Cisse.

Cisse, who injured his ankle Monday against West Virginia, was suited up but didn’t participate in warmups for Saturday’s game. On Thursday, Boynton listed Cisse as day-to-day. Cisse hadn’t practiced since turning the ankle. Boynton said postgame that if Cisse can go Tuesday against Kansas State, he will.

“We need to get him healthier and closer to ready,” Boynton said. “He’s getting there. The truth is the kid wanted to play. He’s hurting now because he feels like he could’ve helped us, but my job is to make sure long term, not only for our team but for him that this doesn’t become about today. He’s got a future in basketball also. We can’t mortgage that off in hopes that we can get the job done.”