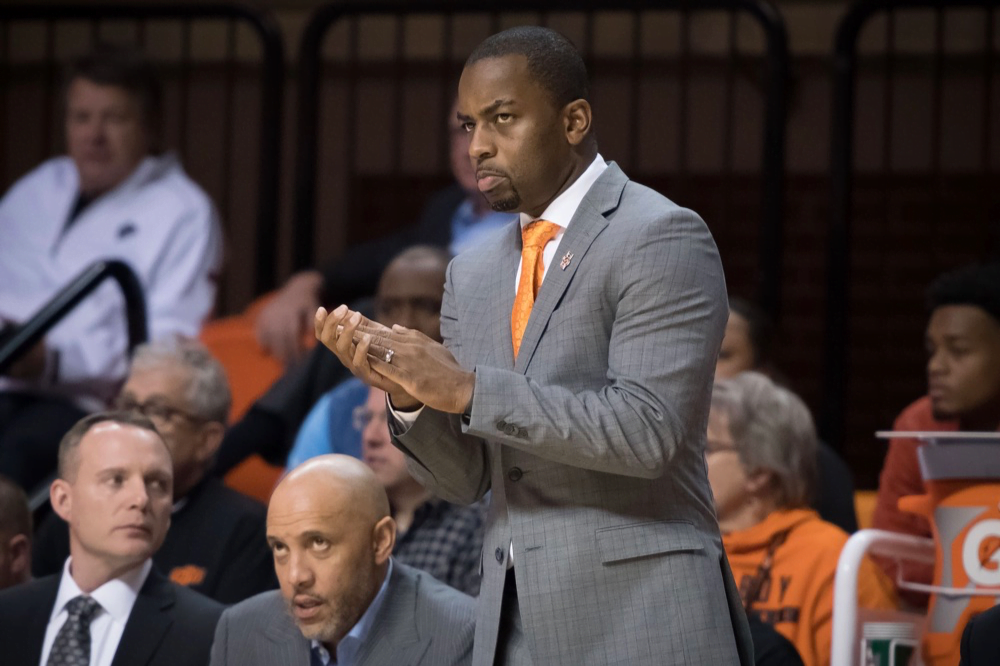 Oklahoma State won its ninth game of the season on Tuesday in GIA over Tulsa 71-59. Kendall Smith led the way with 16 points, 2 rebounds and 3 assists while Jeffrey Carroll scored 14 points and had 11 rebounds.

The Pokes shot 56 percent from the field in the second half and were 11-for-15 on 2-pointers over the last 20 minutes. They closed the game on a 14-6 run offensively and hit five of their last six 3-pointers to finally put away a pesky Golden Hurricane squad.

It wasn’t the prettiest game, but OSU kept Tulsa at arm’s length with its defense and finally found its groove on the offensive end with a few minutes left in the game (the Pokes led for the final nine minutes).

Oklahoma State shot 34 times from 3-point range and once from the free throw line. Read that sentence again. The Pokes needed to hit five of their last six to raise their percentage from deep above egregious (they finished at 29 percent) and yet I don’t really blame them for the strategy.

Tulsa was playing a half-hearted zone that was begging for Dizzy to have the game of his life. He didn’t, but Carroll and Smith obliged the Fightin’ Frank Haiths by shooting a combined 16 times from behind the arc.

Would I like to see the Pokes get to the rack more than they did on Tuesday, especially against lesser teams like TU? Yes, I would. But watching the game unfold didn’t scream that OSU was hoisting atrocious jumpers. They just … missed a lot of them. At one point they were 5-for-28!

OSU came into the game ranked No. 230 nationally in made 3-pointers, but at least the right guys are taking them. Carroll averaged 44 percent from deep last season and Smith was just below 35 percent.

I’m fine with this, but I would like to see those two guys (who shot a combined 7-for-10 on 2-pointers) get inside and try to get to the free throw line more, especially with OSU’s bigs playing more at the high post (more on this in a second). OSU will go 0-18 in the Big 12 if they shoot one free throw a game.

Here are some stats.

OSU pressured Tulsa up top quite a bit and turned risky steals into easy points. I’m always a fan of teams pressuring, especially against less-talented squads like TU, but it does give you pause going into the Big 12 of whether OSU has enough muscle on the back end to absorb the risk involved. Still, with defensive pests like Brandon Averette, Cam McGriff and Carroll, OSU is fun to watch on that end.

I missed the game on Saturday (#vacay) so this was my first time to see Yankuba Sima play college basketball. I’m in! He’s good! Maybe the upgrade from Lucas N’Guessan simply makes it seem like OSU went from Greg Ostertag to Hakeem Olajuwon, but they clearly trust him and Mitchell Solomon to spread the offense out a little bit more than they did at the beginning of the season (see No. 4).

Plus Sima plays as if he knows what he’s doing, runs the floor well, is another legitimate big body to throw at teams and can protect the rim better than anyone OSU has had in a while. Maybe Sima vs. Tulsa was simply an optical illusion and I won’t be singing the same tune come West Virginia, but I’m encouraged by his presence thus far.

Thomas Fleming wrote about OSU morphing its offense into a little motion spread against Florida State. They didn’t do it as much tonight, but I got the warm fuzzies when they did. Because Sima is athletic and seems like a good enough passer, and because Solomon can hit from the high post, OSU isn’t scared to run everything out of them up top. This allows so much more spacing (it looked like the offense went from operating in Lake Carl Blackwell to running in the Red Sea!) for its rangy guards to run around.

Tulsa’s defense dictated that they didn’t need to run it a ton — and we won’t see it as much as we did last year, anyway — but man, it’s a nice tool to have in the belt headed into conference play.

OSU will finish out its non-conference schedule on Friday at home with UT-Rio Grande Valley which means the Pokes will be 10-2 going into the Big 12. As Mark Cooper wrote about splendidly this week, Mike Boynton’s team’s calling card is always going to be defense, but they seem to have maybe more offensive weapons than I thought they would.

Are they going to be great on offense? No, but by playing the kind of defense they’ve been playing, they can have an offensive risk profile that is a problem for some teams (i.e. easy transition points and shoot lots of 3s). It’s not ideal for winning Big 12 championships, but for getting a first-year coach to the NCAA Tournament? It could (and hopefully will) work.