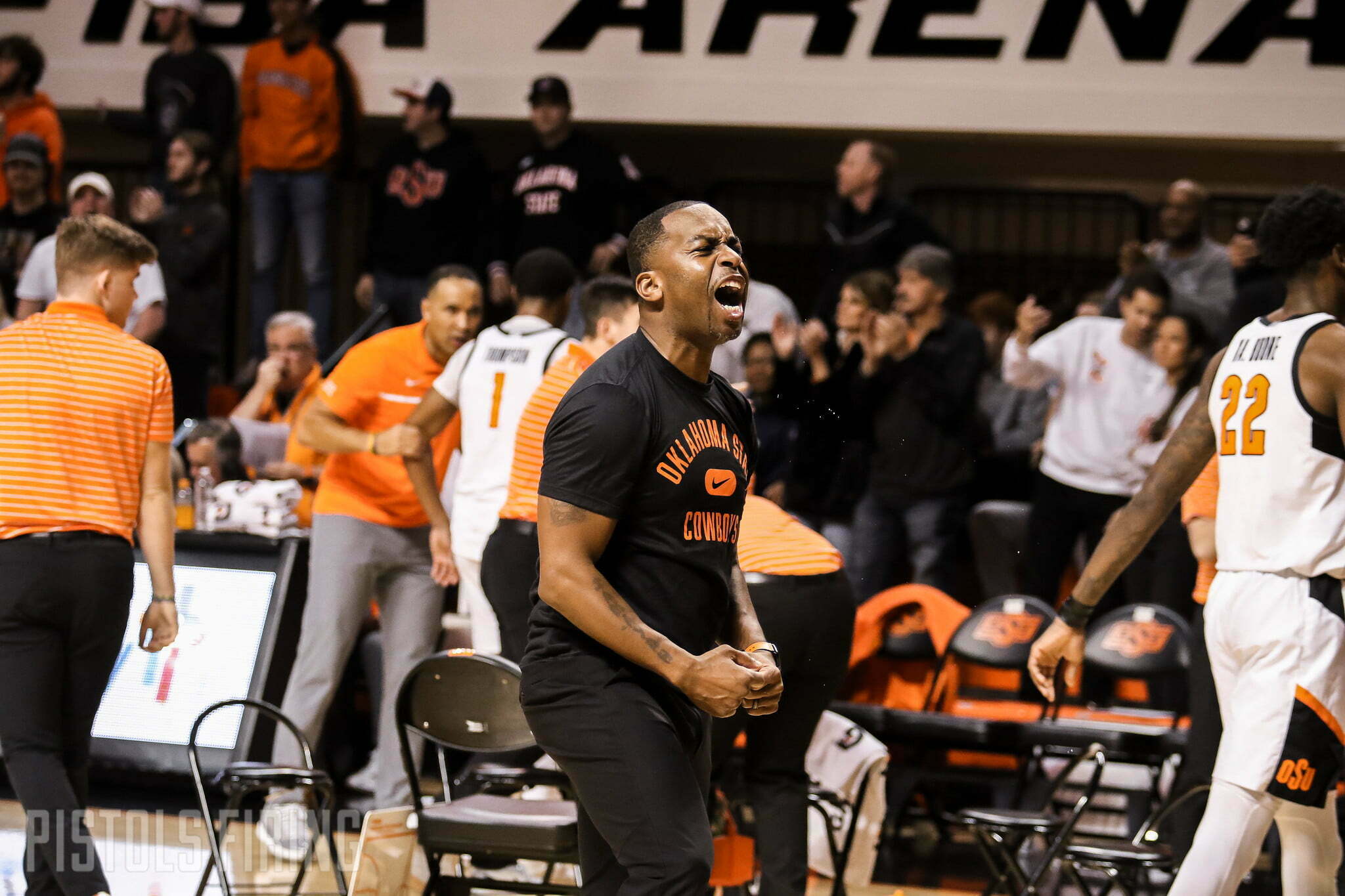 STILLWATER — A rowdy Gallagher-Iba crowd pushed the Cowboys past their losing streak in Bedlam.

Oklahoma State defeated Oklahoma 72-56 on Wednesday night thanks to quite the second-half outburst that saw OSU score 48 points. Here are five thoughts on the game.

With about four minutes to play and his team on defense, Mike Boynton ripped his orange blazer off, threw it to the bench, got in a defensive stance and smacked Eddie Sutton Court.

His team responded, forcing OU into a shot-clock violation after a Kalib Boone block. There was a timeout after the play where Boynton met his team at near center court. Cowboys were chest-bumping as they went to the team huddle. The 10,789 fans inside Gallagher-Iba Arena had the old barn bouncing.

“Fifty percent of that win goes to our players,” Boynton said. “The other 50% goes to our fans. I’ve been in here for a few loud games, passion-filled, this one ranks up here with the best ones. … Our crowd was sensational and really made a difference in us staying the course.”

When the Cowboys scored only 24 points in the first half and trailed by six going into the locker room, it was fair to wonder whether anyone would show up for the Iowa State game Saturday, but the mostly full crowd had a lot to cheer for in the second half, and for Oklahoma State’s sake, hopefully that crowd had enough fun to keep coming back.

“Here’s what I’d like to have happen: I’d like our fans to do that every game and to show up and watch their team compete because that’s what you see when you go to elite basketball programs,” Boynton said. “And we haven’t performed at an elite level consistently, I understand that. This isn’t in any way a dig at our fans. I’m just telling them that they can make a world of difference for us every single night, and I think their impact was felt tonight.”

What in the heck happened in that second half?

OSU scored 46 points total against Texas Jan. 7. The Cowboys scored 48 in the second half Wednesday night.

Bryce Thompson and Avery Anderson scored in double figures in just the second half, and Kalib Boone and Woody Newton had nine apiece.

It was as if the Cowboys went into the locker room and found the basketball the Monstars used to harness their basketball powers.

OU guard Grant Sherfield came into Wednesday’s game averaging 17.6 points a contest — he almost did that in the first half. And then the Cowboys went Willy Wonka on him in the second.

Here is a look at Sherfield half-by-half:

Boynton hasn’t made a ton of changes to his starting lineup this season. It’s mostly been the five of John-Michael Wright, Avery Anderson, Bryce Thompson, Kalib Boone and Moussa Cisse. Since Cisse’s injury Tyreek Smith has taken his place. But Wednesday’s lineup came with a shock — out was Smith and in was Woody Newton.

How did Newton respond to his first career start? A career-high 12 points and a pair of big-time 3s in the second half.

Newton, the Cowboys’ last remaining stretch forward, brings versatility at 6-foot-9 with a shooting stroke that forces defenses to guard him on the perimeter.

Newton’s first 3 came on the Cowboys’ first possession out of the locker room. It started the snowball rolling in Oklahoma State’s direction as the Pokes hit their first five 3s of the half.

“We’ve been struggling offensively, there’s no question about that,” Boynton said. “Woody brings a lot of versatility to our lineup. Thought we’d give him a shot. Gave us an opportunity to maybe space the floor a little bit more for Kalib. He’s a guy who can also be a 3-point shooting threat, made a couple tonight. He can give you a chance to maybe be more switchable defensively.

“Today’s modern-version small-ball four man. Everybody in our league has got somebody that’s a prominent player on their team.”

5. The Poster Boys Go Off

As of late, it has seemed like it was illegal for OSU’s core of Anderson, Thompson and Boone to all have it going at the same time, but the script finally flipped against the Sooners.

Thompson had a game-high 19 points and a team-best nine rebounds. Anderson added 14 points, five assists and didn’t have a turnover. Boone spent much of the second half hanging on the OU rim, finishing with 15 points, seven boards and five blocks. It was what OSU fans thought they’d get from those three all season.

If they can string this into some sort of momentum — and OSU can get Moussa Cisse fully healthy — this team can reach its potential. But too often this season one of those three has played well while the other two struggled. Maybe this is the turning point.