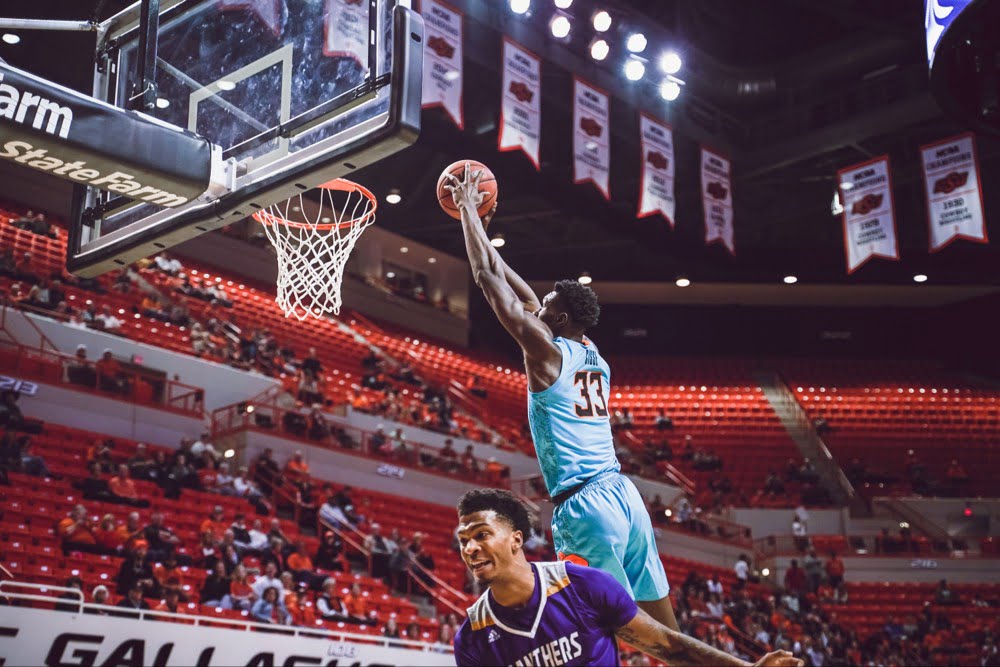 STILLWATER — Winning ugly is better than losing ugly — the Cowboys did both this weekend.

The Cowboys played stingy defense in the first half, taking a 38-15 lead into the break after forcing the Panthers into 20 first-half turnovers. But then the Pokes came out flat to start the second half, and the Panthers started on a 15-0 run to pull within 38-30.

The Cowboys strung together a couple of 7-0 runs in the second half, but OSU never outright ran away from the Panthers despite winning somewhat comfortably.

Here are five thoughts on the game that was.

The shooting percentage is good enough at 45%, nearly the same it finished at last season, but in two games this weekend OSU had 38 turnovers. That’s compounded by the fact that OSU also shot just 59% from the foul line this weekend in 58 attempts.

Last season it was simple: OSU’s offense was going to go through Cade Cunningham. The Cowboys are deeper this year than they were last season, but without that guy, everything just seems lost so far. Avery Anderson was expected to be that guy in the preseason. He showed he is capable in Morgantown last season, dropping 31 with Cunningham and Isaac Likekele sidelined. But, Anderson had a rough weekend. In the two games, Anderson had eight points, two rebounds, three assists, nine turnovers and six fouls, all while shooting 9% from the field.

Some of this is probably because OSU has gone up against a zone in every game it’s played in this season. This team of long, athletic jumpers wasn’t necessarily created to bust zones. Use your athleticism and drive past the guy at the top of a zone and there is just another defender waiting on you. Anderson, in particular, is a bucket-getter. He can go one-on-one with the best of them, but hasn’t gotten to show that off with all of the zone he has ran into.

The Cowboys did a good job of getting to the foul line Sunday, but OSU went just 28-for-46 from the stripe. If OSU’s identity is an aggressive team that gets to the foul line, it needs to make the shots. It’s unrealistic to say a team will make all of its foul shots, but at a 75% clip, OSU would’ve scored 35 points from the foul line instead of 28.

OSU’s identity clearly isn’t a 3-point barrage team, as the Pokes are 16-for-55 from deep in the young season, including 7-for-30 in the past two games.

Many of Boynton’s teams to this point in his tenure have been good transition teams, but they didn’t consistently get out and run in either game this weekend. At optimal performance, OSU coach Mike Boynton said he expects to be a team that gets out and runs again this year. They certainly have the bodies for it.

“I do think we’re gonna be, obviously, a transition team, primarily,” Boynton said. “But in the half-court, there will be a lot of space-the-floor, ball-screen action because we have two really good lob threats [Moussa Cisse and Kalib Boone], well three with Tyreek (Smith), and several playmaking guards who can pass and share the ball well. We’ve just seen a lot of zone, so you don’t see as much of your man stuff. As we continue to see more zone, which Prairie View doesn’t play zone a ton themselves, but they watched the game Friday. They wanted to give themselves a puncher’s chance, so they played it more than they normally do. We’ll get better playing against the zone as we continue to get more reps at it.

“I think transition will be a primary source of offense for us, and then in the half-court, you’ll see kind of a four-around-one. I’ve got to look at how we could possibly play Moussa and Kalib together down the road once we get Kalib a little more conditioning.”

There was some sort of reinforcements for the Pokes after their Friday loss, in the form of Bryce Williams and Kalib Boone making their season debuts.

Williams served a suspension following a DUI charge in August. Boone injured his shoulder early in the Cowboys’ preseason camp.

The two showed flashes of why they were key players in the Cowboys’ run to the NCAA Tournament last season, as Williams scored two points and had a game-high seven assists. Boone had five points, two blocks and an assists in 11 minutes.

For the first time this season, Boynton made some alterations in his starting lineup.

Out were Rondel Walker and Donovan Williams, and in came Bryce Thompson and Matthew-Alexander Moncrieffe.

Boynton didn’t seem thrilled on the effectiveness on platoon swapping moving forward, citing struggles getting into rhythm. So, don’t expect this team to look like the 2014-15 Kentucky squad that used the platoon system. That Wildcat team had nine players on it who played in the NBA. This could be a sign that the Pokes will play a tighter rotation moving forward.

“Platoons don’t really work,” Boynton said. “That’s really the only way to get everybody to play close to some similar minutes, but it disrupts the flow of the game. It doesn’t allow you to really attack the way we want to, and I hope they see that.”

4. A Uni Clash to Say the Least

OSU wore its teal N7 uniforms Sunday. I’m not against them, but matched up with Prairie View A&M’s purple on the orange floor, there was a lot going on.

The Panthers tipped at 8 p.m. local time in Washington, D.C. on Saturday night, got to Stillwater about 3:30 a.m. Sunday morning for a 2 p.m. tip and will now head to Lubbock to play their third game in three days in three cities Monday. Oh, and they play in Phoenix on Wednesday. The team doesn’t play at home until Jan. 1.

It happens because the schools need the money they make by doing these road trips, but man, that’s tough.

“I have a tough time dealing with it,” Boynton said. “I know why it’s done, but I don’t like it. I think about the kids all the time. The guys in the NBA don’t do what Prairie View is doing. There’s gotta be a better way. I’ll just leave it at that.”