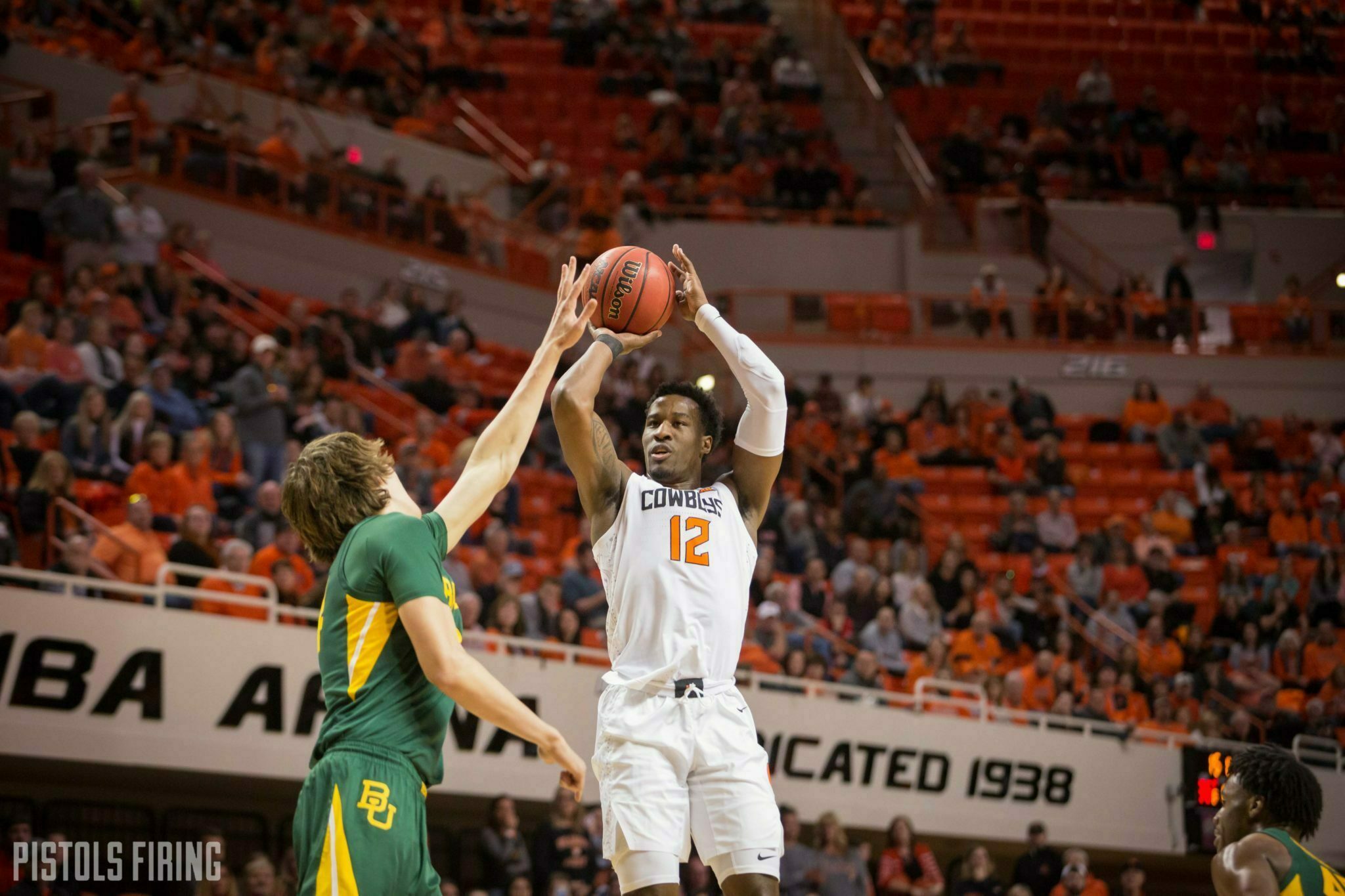 STILLWATER — After a more than troubling start to Big 12 play, the Cowboys were right there with one of the nation’s top teams.

Oklahoma State fell to No. 2 Baylor 75-68 on Saturday in Gallagher-Iba Arena. The loss drops the Cowboys to 0-5 in conference play, but the Pokes have undoubtedly taken steps forward in their past few games.

1. Yor Was Back Until he Wasn’t

For a while this game will be remembered for when Yor Anei threw away his rebound in the final seconds, but Anei showed glimpses of the 6-10 big who won MVP of the NIT Season Tip-Off event a few months ago.

After playing just eight minutes on Wednesday, Anei went for 30 minutes off the bench against Baylor. It was the first time he hit the 30 mark since the Western Michigan game on Nov. 22. He finished the game with eight points on 3-of-4 shooting with eight rebounds and only two personal fouls. But for a while, all most will remember was that one turnover.

“As far as the last play, it was one of probably 100 mistakes in the game,” Boynton said. “That didn’t lose us the game. It was an unfortunate play. It’s a play he probably makes 20 times a game while he’s out there. Sometimes when you’re going through moments like this, those things happen.

“I told that kid I love him. He’s going to be really good for us. He played 29:56 like Yor Anei is capable of playing. I want him to focus on that and not the half of second where he just mistakenly threw the ball to the other team. If he does continue to play the way he played today, he’s going to be a big part of the reason why we get it turned and have success moving forward.”

The Cowboys pushed the ball up the floor for much of the game, and it resulted in more looks.

OSU put 56 shots up against Baylor. For reference, the Pokes had only 48 field-goal attempts against West Virginia. The tempo unleashed point guard Isaac Likekele, who had 16 points and five assists. With his ability to get to the rim on the break, it also enabled him to kick the ball out to other players, as OSU hit 10 of its 24 3-point attempts.

“We just wanted to get back to playing how we play,” Likekele said. “The first couple games in Big 12, we felt like we were just playing so conservative and so slow. … At the end of the day, I feel like when we’re pushing in transition, that’s us at our best.”

The tempo helped the Cowboys build a 12-point lead. However, when teams get up by that much, it gets tougher and tougher to not use up some clock. It’s a game within the game, but Boynton said tempo is something the Cowboys have to commit to because it’s when this team is at its best.

OSU used its 2-3 zone quite a bit in the non-con, but it’s been absent for much of the conference season.

Baylor seemed surprised to see the zone, and after the game Baylor big Freddie Gillespie said it had him thinking about Baylor’s only loss of the season to Washington.

The Bears went just 2-for-12 from deep in the first half, and it looked like this zone was going to be Baylor’s kryptonite, but in the second half Baylor torched the zone, hitting 55 percent of its 3s en route to the Bears’ comeback win.

“Can we just lineup and guard them man-to-man? Probably not, right?” Boynton said. “At some point I can’t just let stubborn get us beat. My job is to help our team. Although I want to play man-to-man, the zone gave us a chance today. We came up short, but I still think that’s how you got to play them.”

After standout performances against Texas earlier this week, Avery Anderson and Kalib Boone made the first starts of their career, and it went in typical freshman fashion.

Anderson was held scoreless for the first time in Big 12 play. He played 14 minutes, missing all three of his shots. He had one rebound, one assist, two steals, two turnovers and four fouls.

Boone played just seven minutes after getting hit with some early foul trouble. He finished with no points, no rebounds and three fouls.

The two have shown their potential lately, but making first starts against the No. 2 team in the country was probably a tall task.

“I thought the two young guys that did start, they did fine,” Boynton said. “They played like freshmen today. Just like what I talked about the other day. Didn’t surprise me that they weren’t as good as they were on Wednesday, but they earned that through practice and through working hard.

Seniors Lindy Waters and Thomas Dziagwa have had up and down games at the start of their final Big 12 season, but Cam McGriff has been a rock.

McGriff played one of his better games of the season against Baylor. He finished with 16 points, five rebounds and two blocks. He entered the day having made 10 of his 44 3-point attempts on the year, but he drilled his first four on Saturday, finishing the game 4-for-6 from deep.

A lot of what McGriff does doesn’t always show on the stat sheet, but 17 games in McGriff leads the team in total rebounds (112) and second in total points (170).

“Every game is different,” McGriff said. “We’re definitely going against different opponents. I felt like we were definitely in a better situation than we were against Texas. We just played harder. We’re finding our grove among ourselves. It’s not really just one resolution to winning basketball games. We just have to stick to it and continue to play the right way.

“We still haven’t gotten the result that we wanted, but we’re just trying to stay positive and stay in high spirits.”