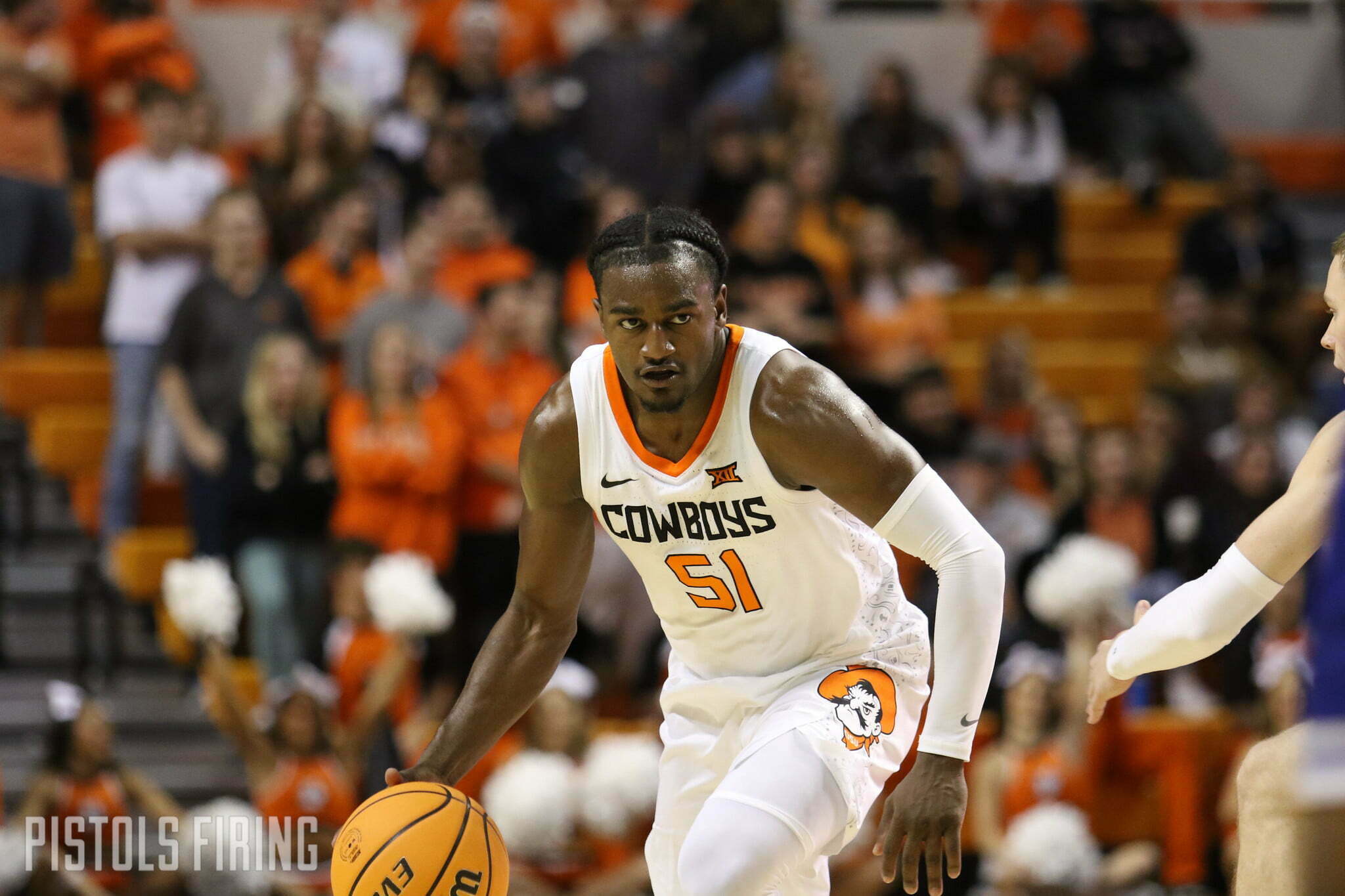 STILLWATER — The Cowboys got through night one of the college basketball season unbeaten, which is better than some Big 12 teams in this state can say.

The Cowboys struggled to score early before ripping off a 28-2 run to start the second half, which built a 31-point lead. But the Mavericks didn’t go quietly into the night, grinding down the stretch to get to the foul line 18 times in the second half. But no matter the Mavericks’ effort, the Cowboys’ win was inevitable. Here are five thoughts from the game.

Three-point shooting was the bane of the Cowboys’ existence last season, and like some sort of sick and twisted joke, the Cowboys started their 2022-23 campaign 0-for-11 from deep.

Boynton said based off what he has seen in practice, he doesn’t expect the woes of last season to be a constant in 2022-23.

“I don’t want to say that we’re going to be a 40% 3-point shooting team,” Boynton said. “There are gonna be nights where we don’t shoot it great, that’s part of the game. There will be nights where we shoot it much better than we have in the last couple years.”

The saviors of the shooting strokes were High Point transfer John-Michael Wright and Woody Newton, who combined to go 7-for-9 from deep. Texas State transfer Caleb Asberry shot 42% from deep as a sophomore and 38% as a junior. Including last week’s exhibition, he is 0-for-8 as a Cowboy, which is 0% in case someone needed the math. That will change at some point.

2. John-Michael Wright’s Solid Debut Comes to an Abrupt End — But He Is OK

When OSU’s offense struggled early, John-Michael Wright righted the ship. But in the second half, Wright locked up and fell to Eddie Sutton Court while casually dribbling the ball down the floor. It looked gnarly, but after the game, Wright said both of his legs cramped up.

“I’m good now,” Wright said. “I just caught a cramp in both of my legs. I couldn’t move neither one of my legs. I feel good now. I just gotta make sure I drink some more water before the game.”

Wright was a calming presence OSU needed when it struggled offensively early. He was the one who stopped the 0-for-11 3-point drought.

Despite playing only 23 minutes because of the cramping, Wright had 14 points, was 3-for-5 from 3 and was plus +21 in plus/minus.

An 11-point win over UT-Arlington might not be the most inspiring result (especially considering OSU beat UTA by 53 last season), but other teams in the Big 12 had worse results on the opening day of the college basketball season.

OU lost to Sam Houston State 52-51 in Norman after the Sooners turned the ball over 21 times. And No. 14 TCU trailed Arkansas-Pine Bluff by 20 points before coming back to win 73-72.

4. Cisse Was the Mavericks’ Focus

The Mavericks weren’t going to let Moussa Cisse be the reason they lost.

After Cisse had a 17-point, 10-rebound double-double against UTA last season, the Mavericks bumped him every time he went through the lane and stepped back to deny lob opportunities. Cisse finished Monday’s game with five points, five rebounds and four blocks.

With as physically dominant as Cisse can be, this could be how teams treat him all year.

Oklahoma State isn’t as long a team as it has been in the past.

Guys like Isaac Likekele and Keylan Boone were solid rebounders, especially as a compliment to Cisse, Kalib Boone and Tyreek Smith. But now some of that weight gets put elsewhere, and Avery Anderson and Bryce Thompson answered the call.

If Cisse is eating two block-outs every time a shot goes up, someone is going to have to help out, and the Cowboy guards passed the first test.