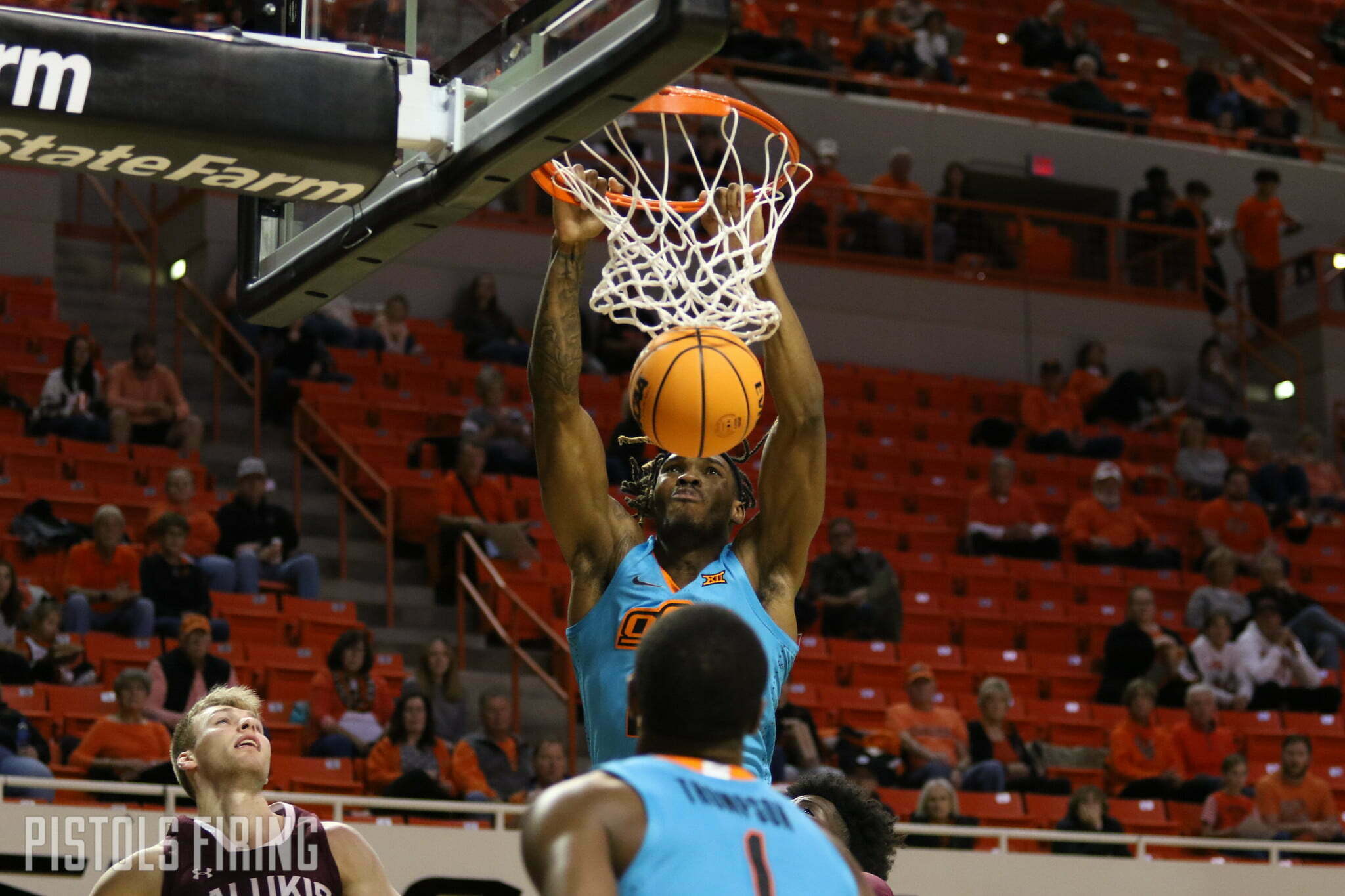 STILLWATER — After a sluggish start, the Cowboys outclassed Prairie View A&M in the second half Sunday, leading to Oklahoma State’s second 20+-point victory in the past three days.

Oklahoma State beat the Panthers 78-53 in Gallagher-Iba Areana. Here are five thoughts from the game.

1. Cowboys Searching for a Full 40 Minutes

OSU went into the half against the Panthers leading by a point before outscoring them by 24 in the second half. If you had to pick one or the other, you’d probably prefer strong finishes, but finding out how to put together a full 40 minutes will be key for this team with bigger foes (like UConn on Thursday) upcoming.

Whatever Mike Boynton’s halftime message was Sunday seemed to get across, at least.

“It’s Sunday, so I’m gonna have to go back to church again,” Boynton said. “I’m going to call my grandmother because she watches every game and she lets me know when I say bad words. I’m gonna have to tell her because I know she didn’t see it on the court, but it was Sunday and I should probably not say some of the things I said at halftime. But our team needed it, and my job is to make sure that we give ourselves the best chance to win. So whatever the message is that’s necessary, that’s the one that I’ll try to deliver.”

2. Avery Gets It Going in the Second Half

Avery Anderson benefited most from the second half surge, pouring in 13 of his game-high 16 points in the final frame.

Anderson scored efficiently Sunday, taking only eight shots while getting to the line eight times (where he made seven). He also had four rebounds and three assists while turning the ball over only once.

Tyreek Smith has scored 49 points this season and 41% of those points have ended with him hanging on a rim.

Smith is credited with 10 dunks this season including six in OSU’s past two games. Against Tulsa and Prairie View A&M, 66% of Smith’s 18 points were dunks. He dunked so well Sunday afternoon John Higgins gave him a technical for patting his head.

“Tyreek has got a recklessness about him, as well.” Boynton said. “It sometimes makes it uncomfortable for other people to be in the paint with him. I think he dunked that ball with three guys going for the rebound.”

Over his past three games, Smith is averaging 9.7 points and six rebounds a game. Not too shabby for OSU’s third big behind Kalib Boone and Moussa Cisse.

4. Another Double-Double for Cisse

Coming into Sunday, Moussa Cisse had 21 blocks. The next closest Big 12 player had 11.

He added four stuffs in his 23 minutes on the court Sunday and had his fourth double-double of the young season with 13 points and 11 rebounds.

In watching him all the time, it’s easy to feel like this is normal, but it really isn’t. What he is doing has been special so far, and if OSU finds its way onto a national stage, Cisse could be up for some big time hardware.

“He’s not even the same player [he was last year],” Boynton said. “It’s not even close. A year ago today, he was an emotional rollercoaster at all times. He still plays with great passion, but he’s less emotionally driven and he’s more tactical about what he’s supposed to do. He’s very good in ball screen coverages. We haven’t shown it, but we can switch with him a little bit when we need to.

“And obviously when you get in the paint, people are looking around to see where he is. He’s having an effect even when he’s not blocking shots. Teams aren’t taking as many layups because he’s in there. We gotta continue to just build his confidence on the offensive end, which he’s getting better there as well. And the free-throw line is obviously the most glaring thing that he’s gotta address.”

The Cowboys have been tested in their first seven games of the year, but the challenge gets much more difficult Thursday with a game against UConn (ranked eighth in KenPom as of writing).

The Huskies are 7-0 this season with a chance to make it 8-0 against Iowa State on Sunday evening. They already have impressive wins against Oregon and Alabama.

The Cowboys have played well at times this season and to the level of their competition at others. A competitive game Thursday in Connecticut could go a long way in regaining some momentum after the Pokes’ two early season losses.