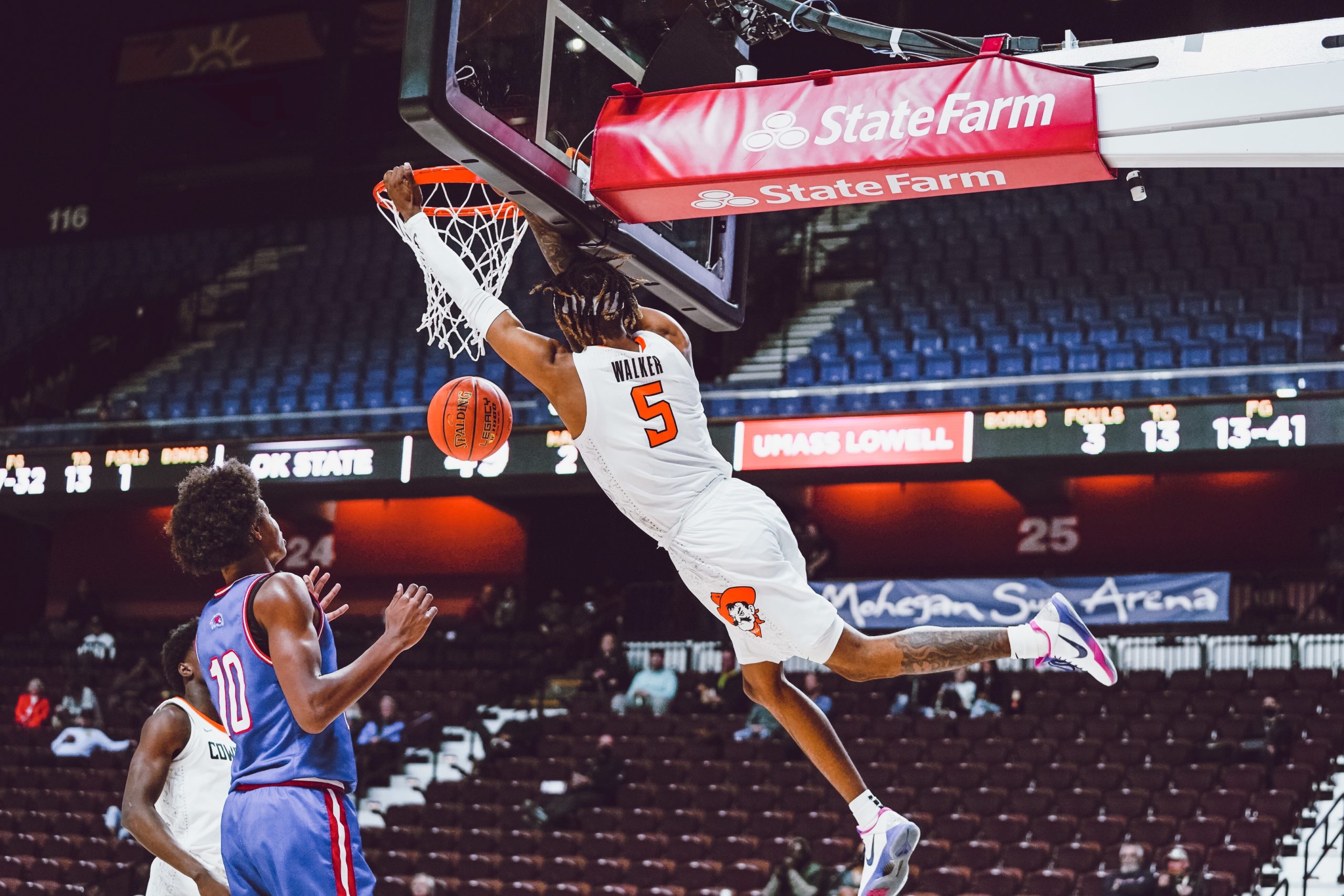 The Cowboys didn’t play their best basketball this past weekend, made obvious by a notch in the loss column, but a 22-point win in the Constitution State should help things.

Oklahoma State beat UMass Lowell in the Cowboys’ first game of the Basketball Hall of Fame Showcase at the Mohegan Sun Arena. Here are five thoughts from the game.

A team finally tried to match the Cowboys’ toe-to-toe, playing man defense … and OSU shot 59% from the field.

The Cowboys used their superior size and athleticism to take good shots against UMass Lowell. Not the best 3-point shooting team, OSU put up only 11 shots from behind the arch (seven of which were in the second half). Instead of settling, the Cowboys bullied their way to 44 points in the paint, tying a season-high with the UT-Arlington game.

It also supplied the Cowboys with a good amount of free-throw attempts. OSU outshot the River Hawks 24-15 from the foul line. It still wasn’t an outstanding performance from the stripe, though. The Cowboys were 16-for-24 or 67%, but that’s better than the 50% or 61% the Pokes shot in games this past weekend.

In his postgame presser Sunday, OSU coach Mike Boynton said he wanted to play inside-out more this season, meaning running the offense through the likes of Moussa Cisse and Kalib Boone.

That process is going to go through some growing pains, as it did Tuesday when the pair of bigs combined for eight of the Cowboys’ 19 turnovers. UMass Lowell did good in taking advantage of the Pokes’ turnovers, scoring 19 points off them. That’s the most a team has converted against OSU in this young season.

Despite posting a team-high five turnovers, Cisse made up for it in other areas, having 12 points, 11 rebounds, two blocks and making a whole host of River Hawks second guess their takes to the basket.

3. Anderson Bounces Back after Rough Weekend

A promising sign for OSU is that Avery Anderson recorded only two turnovers after having turned the ball over four times a game entering Tuesday.

Anderson scored eight total points in the Oakland and Prairie View A&M games, but he bounced back with 11 on Tuesday on a season-high 56% shooting. He was also his active self on the defensive end, posting a pair of steals and a block.

4. Bryce Williams Does So Much Well

Bryce Williams is flashy with the self-oop dunks to close out games, but he also isn’t afraid to get his elbows dirty.

After serving a suspension during OSU’s first two games of the year, Williams has returned and instantly been a calming presence for the Cowboys with the ball in his hand. He did the more notable things like scored 12 points and tie the team-high with four assists, but he also did the dirty work, going 5-for-5 from the foul line and recording a team-best four steals.

Williams probably slipped a little under the radar with Anderson, Isaac Likekele, Rondel Walker and Bryce Thompson all finding a way to share the limelight, but if Williams is able defend like Anderson and Walker, pass like Likekele and shoot like Thompson, it won’t take long for people to start to take notice.

Four games into the season, OSU has made 20 3-pointers — seven of those have come from Keylan Boone.

Boone played just nine minutes Tuesday, but was efficient with his shot, going 4-for-5 from the field and 3-for-4 from 3-point range. His only other traditional stat was one lone rebound, and he was an even 0 in plus/minus (worst among Cowboys who played more than five minutes), but one of OSU’s most efficient offensive plays to this point in the year has been the Keylan Boone 3-point shot.

Everything Bryce Thompson does gets talked about, but an unconventional streaming service during a preseason event game in Connecticut in a nearly empty gym is about as under-the-radar it gets from the former five-star prospect from Booker T.

Thompson was 5-for-6 (83%) from the field for a team-high 14 points. He also had four assists, which is a career high for him and a sign of OSU using him on the ball more than he was at Kansas last season.