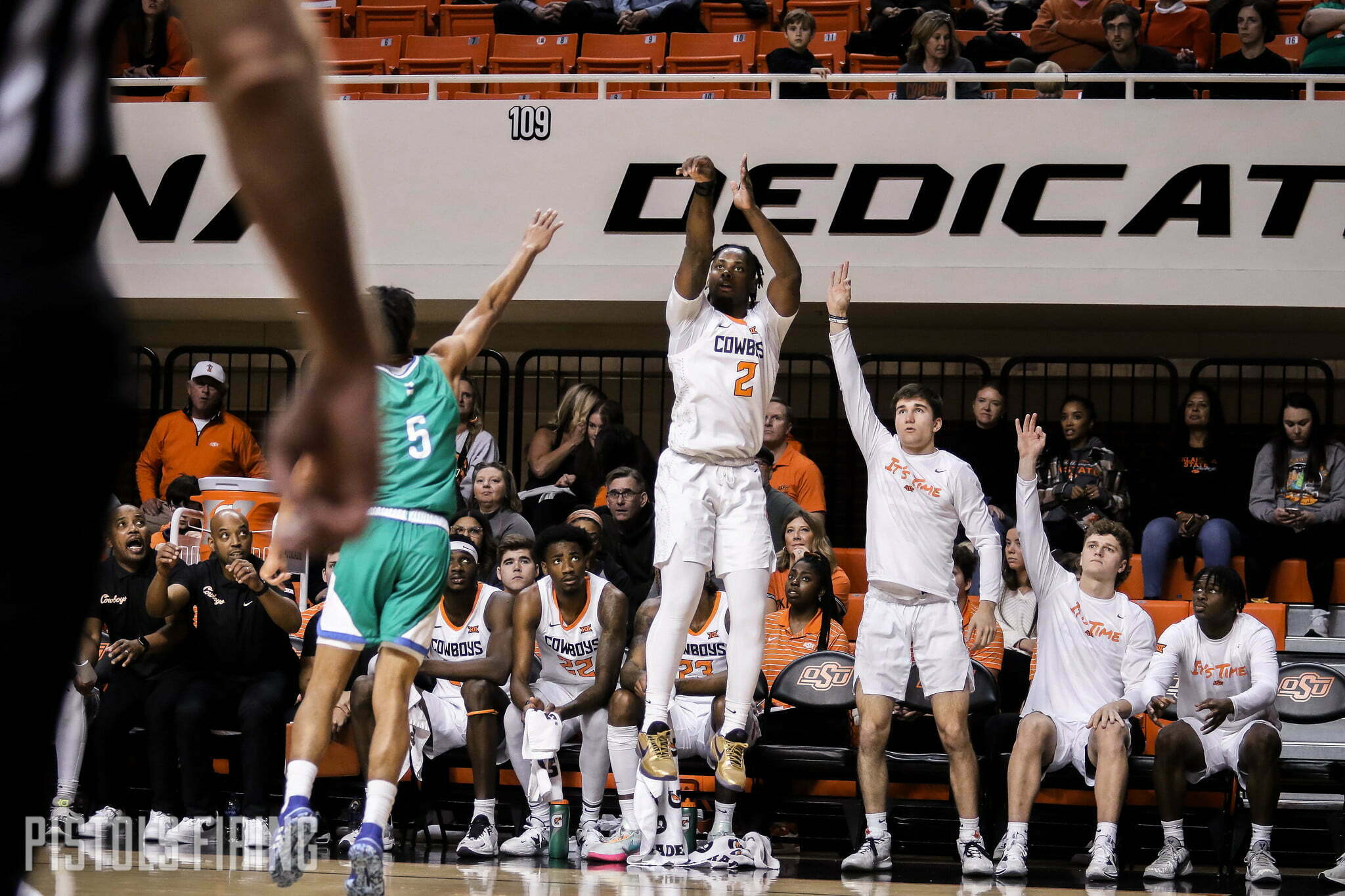 STILLWATER — The Cowboys head into their holiday break with one of their most dominant wins to date.

Oklahoma State thumped Texas A&M-Corpus Christi 81-58 on Tuesday afternoon in Gallagher-Iba Arena. The Cowboys led for 37:17 of the 40-minute game and never trailed.

Four Cowboys scored in double figures and six had at least eight points. OSU enters its Big 12 opener at 8-4. The Pokes play Kansas at 1 p.m. Dec. 31 in Lawrence.

But before that, here are five thoughts on Oklahoma State’s win against Corpus Christi.

As a whole, the Cowboys are up to shooting 33% from deep on the season, a far cry from the 24% they shot two games into the season.

“It’s always been there, it’s just a matter of figuring out how it works together,” OSU coach Mike Boynton said. “That’s what you play your nonconference schedule for. I get people want us to be undefeated and be 12-0 or whatever it is. I want to get better. I want our team, when I put a nonconference schedule together, I never plan to lose. I want to win every game, but I don’t want to be 12-0 and not improve. I don’t want to be 12-0 going into Allen Fieldhouse on New Year’s Eve and then seeing real competition for the first time. I want to figure out who we are before that happens. I think we’re starting to figure out who we are.”

2. Running Teams Off the Line

Three-point shooting is the name of game in modern basketball. And while we just discussed how the Cowboys are hitting more 3s, they’re defending the 3-point line even better.

This stat can be attributed to an unlikely source: Moussa Cisse. Cisse might not be on the perimeter defending 3-point shots, but his presence in the paint (a Big 12-best 35 blocks this season) allows the Cowboys’ perimeter defenders to be as aggressive as they can be. The alternative of chucking up a contested 3-point shot would be driving to the lane where Cisse awaits, which often has an even lower percentage of success.

“Everything defensively starts with Moussa,” Boynton said. “I can’t [say] enough about how important he is to what we do on that end of the floor. He gives everybody confidence that they can do their job all out because if they break down, that’s where it ends.”

3. Cisse Works a Post Spin into His Offensive Arsenal

Although he is one of the nation’s top defenders, Cisse’s offensive game is a work in progress, but the progression was evident Tuesday.

Cisse finished the game with 12 points and 14 rebounds — his fifth double-double of the year. Four of his six made baskets ended with him hanging on the rim, and on a few occasions that came after a nice post spin move, a move that Cisse hasn’t whipped out a ton this season.

The Cowboys scored 29 baskets Tuesday, and 22 of those came off an assist.

That hasn’t always been there this season. For instance, the Cowboys had five assists on 22 made baskets against UConn less than a month ago.

Avery Anderson led the way Tuesday with a career-high nine assists. Bryce Thompson added six, and John-Michael Wright had three. Turnovers have been a big issue for the Cowboys this season (they still had 16 on Tuesday), but the assist totals rising should help alleviate that.

5. Boynton Gets into the Holiday Spirit

Ever a sneakerhead, Mike Boynton took a risk Tuesday, but it seemed to pay off.

Getting into the holiday spirit, Mike Boynton had Grinch-esque shoes on the sideline of Eddie Sutton Court.

The Nike CPFM Flea 1’s retailed for $190, but the seven that have sold Tuesday on StockX (a popular sneaker resale site) have sold for an average of $358.57.

“It fits, right?” Boynton said. “I probably won’t wear them again, but it fit today.”