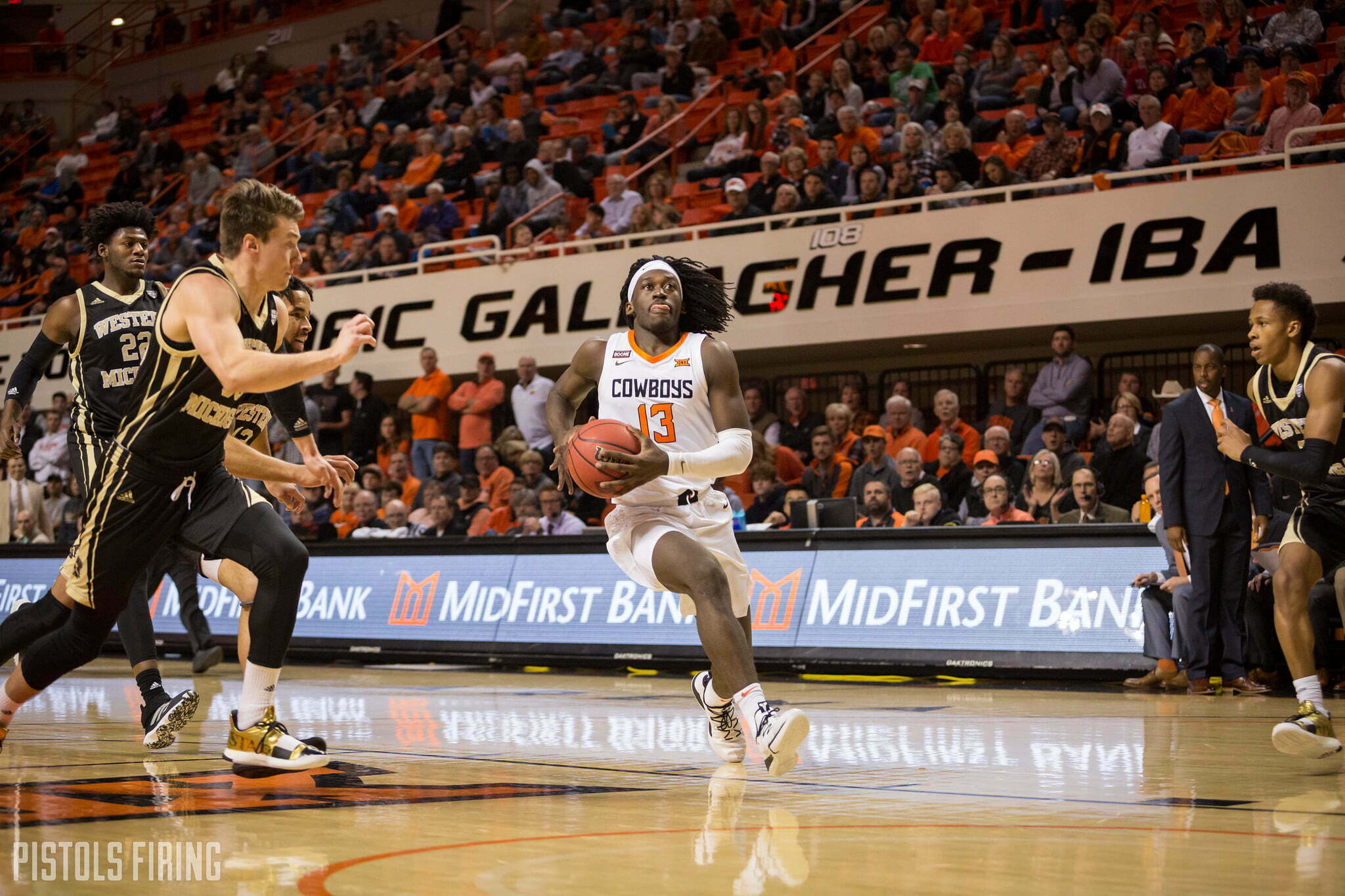 STILLWATER — Well there is the team Mike Boynton took to Brooklyn.

The Oklahoma State basketball team dismantled Southeastern Louisiana 82-31 on Sunday in Gallagher-Iba Arena. Here are five thoughts from the contest.

After missing four games with an undisclosed illness, Likekele was in control of the Cowboys’ game against the Lions, scoring nine points, dishing four assists and finishing a game-best plus-34.

“I really felt the same conditioning-wise,” Likekele said. “I could say I did get tired the first couple minutes, just off of excitement. I was really excited just to even be back out there, but other than that, I felt the same as usual.”

Likekele also had no turnovers in his return, making Sunday his second turnover-free game of the year.

OSU coach Mike Boynton said he told his team that OSU can’t be a team that is that drastically different because of one guy. That’s another thing that speaks to just how much Likekele means to this group.

The one they refer to as Ice leads OSU with 21 steals this season. His 13.3 points per game is the best on the team. His 39 total assists lead the team. And, despite all that usage, Likekele has just 15 turnovers this season. Three Cowboys have more turnovers than Likekele, the point guard, this year.

“It’s been rough just watching just because I kinda want to be out there and be able to help my team,” Likekele said. “But also, it’s been beneficial. I got to see things from a different point of view.”

2. This Play is All You Need to See

Let’s break it down a little bit. It started with a solid defensive effort from Chris Harris that the clip doesn’t catch. Harris is a freshman.

Then, up 20 points, senior Lindy Waters dives on Eddie Sutton Court and dishes an good lead pass from his back.

From there it’s … simple? Superstar guard Isaac Likekele tosses it up to the uber-athletic Cam McGriff, who nearly jumps over a defender for the jam.

After the game Likekele joked that he was thinking about taking it himself before he remembered McGriff talking about how good his legs have felt recently.

“We talk about it all the time, the scoreboard is a secondary factor to us,” Boynton said. “What we do, how we do it has to be a constant no matter what the score is or the opponent, where the game is.

“That’s probably the most disappointing thing from our game last week, not that we lost, although I hate losing. It was I don’t think we played in a manner that’s respectable for our program. We certainly did that today.”

Jonathan Laurent played only 2:30 against Syracuse and 7:39 against Ole Miss, but he has since started to find his footing and a bit of a role.

Laurent played 18:28 on Sunday and was the first person off Mike Boynton’s bench. A graduate transfer from UMass, Laurent scored 11 points and had six rebounds. Four of his rebounds were offensive.

“He’s been really good for about a two and a half week stretch now,” Boynton said. “I think going into final’s week is where he started to kinda figure out, ‘OK, this is what I need to do to help this team.’ Sometimes it takes a little while for a new guy, even though he’s a grad transfer.”

Through the Syracuse game in Brooklyn, Laurent was just 4-for-16 from the field to start his lone season at OSU. He is 8-for-16 since, starting with a pair of 3-pointers in garbage time against Ole Miss.

It seems a bit like teaching an old dog new tricks when a grad transfer has to come in and fill a role that he might not be used to filling, but with his size and shooting ability, this could be happening at the perfect time for the Pokes.

Laurent subbed in for the Yor Anei at the start of Sunday’s game after Anei picked up an early foul. That shifted Cam McGriff to center and put Laurent and power forward. That might not work against every team, but with McGriff at 6-foot-7 and Laurent at 6-foot-6 and both are solid rebounders, it gives the Cowboys a bit of flexibility.

Boynton said it allows them to be able to switch more defensively with how good both are at moving their feet. Then on the offensive end, the Cowboys can space the floor a bit more because both can shoot from deep.

“It’s kinda hard finding my niche and spot in this offense on this team, but Coach has been talking to me a lot, all the coaches been talking to me a lot,” Laurent said. “My teammates have definitely been getting on my back about just bringing what I can to the table. I feel like I’m getting more comfortable finding out what I can bring to the table.”

Nine Cowboys have played in at least 10 games this season, but Boynton going that deep into his bench might not happen as much from here on out.

After the game, Boynton said that minutes might start getting tighter heading into the conference slate.

“We’ll certainly start narrowing,” Boynton said. “From game to game, who seven, eight, nine are is kinda starting to crystallize a little bit. But it’ll depend certainly on game situations as well, foul trouble, style of play, all those type of things.

“We’ll continue to search for which guys that we can feel consistently can come in off the bench and help us. We feel good with where we are with probably one through seven, right now. Who eight, nine is from a game-to-game standpoint may depend on how the game is.”

The starting five of Likekele, Dziagwa, Water, McGriff and Anei will certainly continue to get minutes. From there it seems as if Chris Harris and Jonathan Laurent might be six and seven based on their uses early in Sunday’s game.

Avery Anderson will also likely still get some minutes when Likekele needs a breathier, but from that point on I think it could be working down to a game-by-game basis.

How difficult the Big 12 is might be up for debate in football, but it isn’t in hoops.

The conference ranks second in the country in KenPom’s adjusted efficiency margin behind only the Big Ten. Speaking off the Big Ten, Ohio State, the No. 2 team in the country, got beat by West Virginia earlier Sunday.

So, yeah, this isn’t going to be easy. The Cowboys haven’t gone .500 in conference play since 2016-17, and they haven’t gone above .500 since 2012-13. KenPom currently projects the Pokes to finish their conference slate 9-9, and you would think that would be enough to get OSU into the tournament.

This game was important to set up conference play for a few reasons. One, it gave Isaac Likekele a chance to get his sea legs back under him before being thrown into Lubbock to play the defending national runners-up.

“I feel like it was very important,” Likekele said. “I don’t see how somebody can just go to Texas Tech after missing four (games) or so and expect to ball out. I thought it was very vital for me to play this game and just come out here and get the feel of things again.”

Boynton also said it was important to get a game in after the holiday break because depending on how the schedules line up, that isn’t always possible.

The Cowboys nonconference schedule tested them. They played seven teams inside KenPom’s top 78. The Big 12, though, has all 10 teams inside the top 87.