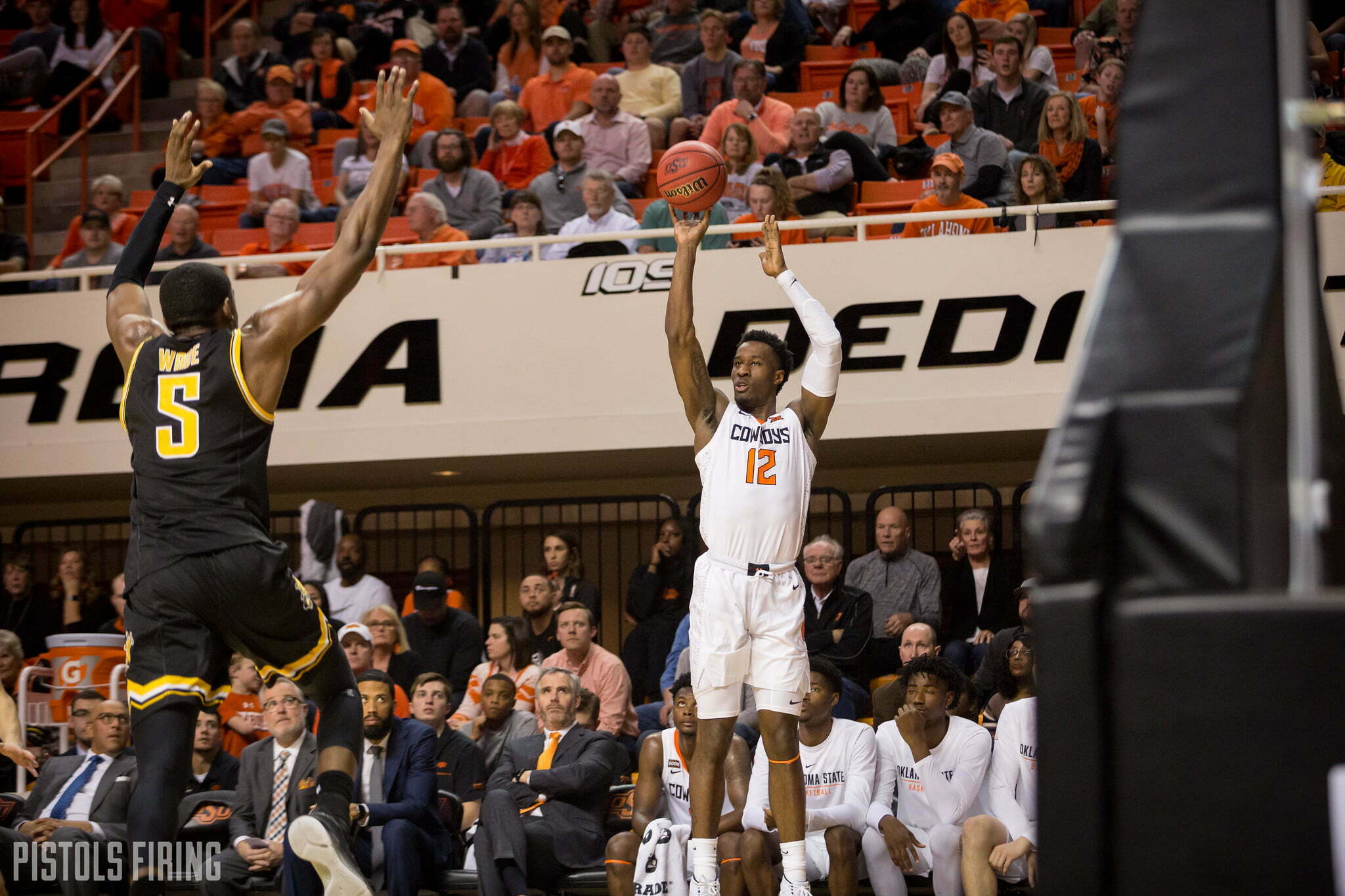 For the fourth straight season, the Cowboys start their conference slate with a loss.

Texas Tech thumped Oklahoma State 85-50 on Saturday in Lubbock after the two teams played a competitive first half. Here are five thoughts from the beat down.

A few possessions into that game, I thought OSU had the runaway potential, not Tech.

It took two Lindy Waters 3-point attempts for Chris Beard to switch Davide Moretti off Waters because he could just shoot over Moretti.

It also looked as if OSU had significant advantages at power forward and center. Even at the half it felt like a game where the Cowboys were destined to turn some defense into offense, hit some 3s, maybe a Cam McGriff dunk and leave Lubbock 1-0 in Big 12 play.

But that second half was just gross. Here is a look at team stats in the second half alone.

So, Tech scored as many points in the paint in the second half as OSU scored points.

OSU’s zero points in the paint also show how stingy the Red Raiders’ defense was and how much OSU struggled in its half-court sets.

For the first time this season, OSU lost a game that Isaac Likekele played in, and Likekele was proved mortal in it.

Tech did a good job of not letting Likekele go downhill offensively. That’s where he is at his most deadly. He is usually able to bully his defender to the block where he can either lay the ball off the glass, dump it to Yor Anei or kick it to a 3-point shooter. Tech keeping him on the perimeter took away a lot of what makes OSU’s offense successful.

Likekele is usually a team-leader in the plus/minus stat, but today he was a team-worst minus-30. It was a tough day at the office.

I’m known in the PFB Slack and in The Chamber as a Thomas Dziagwa apologist, and it’s true. But he did not play well Saturday in Lubbock.

He isn’t a great defender, but it seemed to especially go against him Saturday. He was 2-for-5 from 3, which in itself isn’t terrible, but he airballed a few of those misses. Then defensively, Dziagwa was in the middle of a few breakdowns early.

He is not and never has been an elite defender. He is a sharpshooter. That’s what you get with him and to expect more at this point silly, but he needs to be more capable on both ends than he was Saturday. And he can be. He has proven to not be a liability many times in his four-year career, but this game just wasn’t one of those games.

The Cowboys’ starters didn’t play much in the second half (more on that later), but Likekele, Dziagwa, Waters, McGriff and Anei still combined for 33 of the Cowboys’ points.

So far this season, those five have scored 653 of OSU’s 914 points. That’s about 71 percent, which isn’t too gaudy of a number, but it just feels like that go-to bench guy hasn’t popped up yet.

Last season, Curtis Jones had no choice but to be that guy, as OSU had only seven guys there at the end. Right now, OSU’s bench consists of Jonathan Laurent, walk-on Dee Mitchell and five true freshmen.

Of that group, Avery Anderson has been the most consistent this season at scoring the basketball, and he was again Saturday. He had nine points on six shots, but he also had four fouls and three turnovers in just 15 minutes on the floor. He’s shown spurts of brilliance but has also been erratic.

Boynton credited Harris’ high basketball IQ early in the season as to what has made him stand out among the freshmen. But, apart from the Syracuse and Georgetown games, Harris hasn’t added much offensively. He had three points against Tech, but took nine shots to get there. He is shooting 28 percent from the field this year.

Laurent seemed to have turned a corner in recent weeks, but he played just eight minutes and took only one shot Saturday. Laurent put up about six shots a game at UMass last season, but has shot just 2.5 times a game through OSU’s first 13.

Lastly, let’s talk about Kalib Boone. He’s shot 50 percent from the field this season (best among OSU’s bench players) but his minutes have been up and down. After not playing Boone much against Wichita State, OSU coach Mike Boynton said he hadn’t practiced well. He got in in the first half against Tech but didn’t score or grab a rebound in 11 minutes.

So that bit of a tangent was all to say that OSU has the guys to be a deep team, but the edges just haven’t quite been ironed out yet. Things need to slow down for Anderson, Harris needs to see some shots fall, Laurent could probably be more aggressive and Boone needs to find a way to get on the floor.

OSU’s starters combined to play 79 minutes in the first half. They played just 43 in the second.

When it got out of hand, it was probably best the Cowboys’ starters got as much rest as possible because they have to play another ranked team in two days. OSU hosts the physically frightening No. 16 West Virginia on Monday night. This is the Big 12 grind.

With how poor OSU played Saturday, it really made me think about what Boynton said Thursday:

“… The team that plays with the most consistency, the ability to move onto the next game no matter how the last one goes, will find itself having more success over the next two and a half months.”

OSU won’t want to consistently play like this, but now it’s time to see what the Cowboys’ ability to move onto the next game looks like.