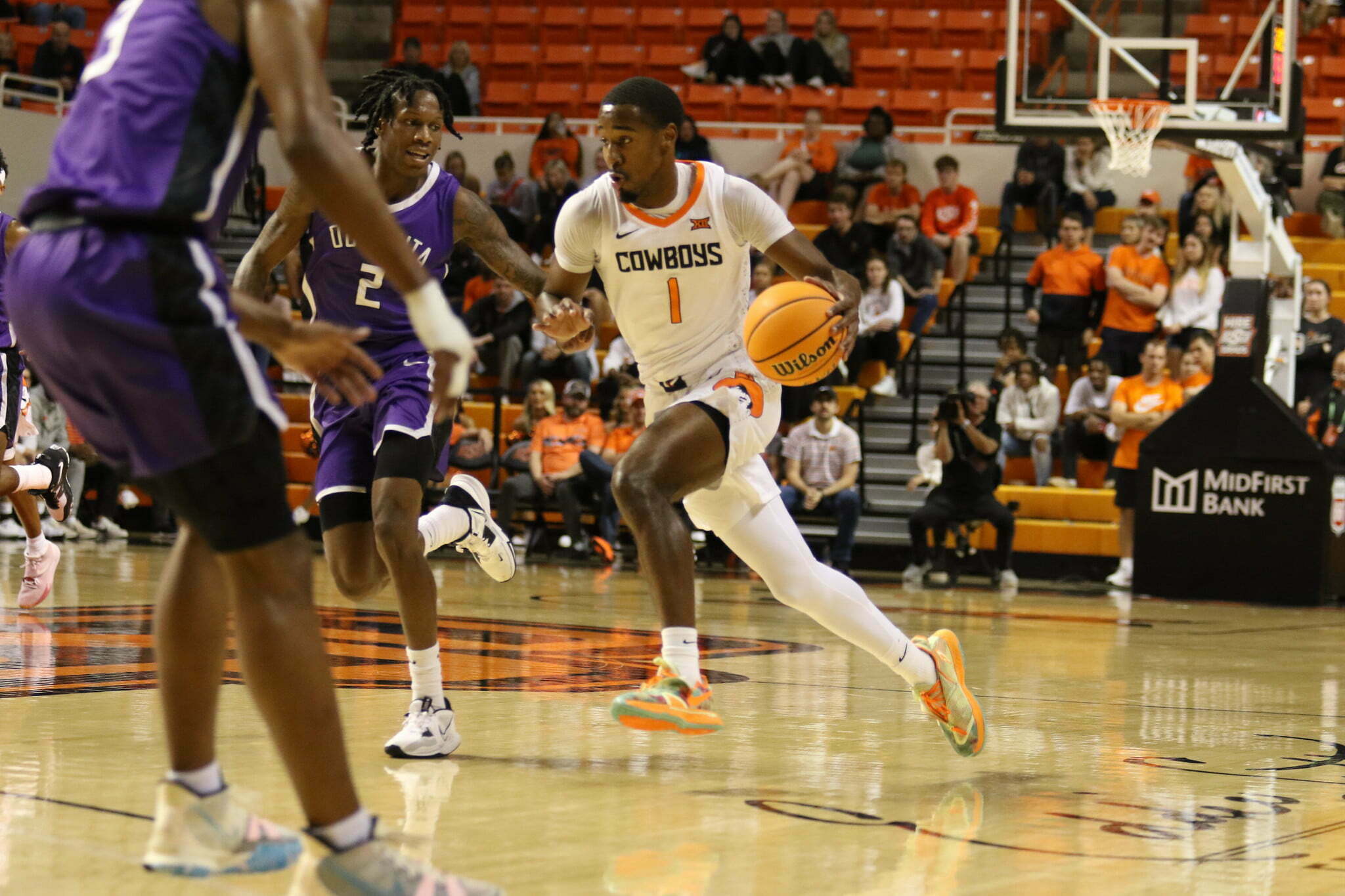 STILLWATER — The Cowboys were supposed to beat the bricks off Ouachita Baptist, and they did.

Oklahoma State stomped the D-II school 85-51 in an exhibition game in Gallagher-Iba Arena on Thursday night. Here are five thoughts from the game.

A few of Boone’s came in the post, where he’d casually spin by a defender before landing on top of said defender while hanging on the rim. And a few came from him running the floor, like midway through the first half when he received a behind-the-back pass from Avery Anderson.

Cisse’s often came where he’d outmuscle a defender as an entry pass came in, leaving nothing between his 7-foot-1 frame and the poor GIA rim. Then there was another where he threw an OSU miss back through the hoop with ferocity.

This was Night 1 of the Boone at power forward experiment, and — opponent aside — he and Cisse shared the floor well.

Part of Boone playing at power forward means he’ll be on the perimeter more. At the beginning of the second half, he was open with the ball on the 3-point line and without hesitation, he shot. It rimmed out, but it’s a start. Before this season, he has shot only one 3 in his past 1,266 minutes on the floor.

The sample size one exhibition game into a season is incredibly small and it’s probably unfair to make any sweeping conclusions yet — but the Cowboys weren’t great from 3.

The Pokes were the worst 3-point shooting team in the Big 12 last season at 29.5%, and after grabbing a couple of snipers out of the transfer portal, OSU shot 30% Thursday night.

Here is a look at who shot what:

Another potentially worrying stat is that the Pokes were 9-for-19 (47%) from the free-throw line. That low percentage can be somewhat contributed to Cisse, who was 3-for-7 from the line.

“I thought we got the good shots from the right people,” Boynton said. “Bryce made his first two, and sometimes that happens, right? He didn’t stay in a good rhythm. Probably didn’t get another one for awhile, so he wound up 2-for-6. Not a terrible night shooting, but you’d like it to be 3- or 4-for-6.

“Asberry, first game out there, I think he’s going to have more nights where he’s 2-for-4 than 0-for-4. More concern was just our free throws. I thought our focus at the free-throw line was lacking. … But those are certainly things that we’re going to address in practice the next few days.”

The main reason Mike Boynton grabbed Caleb Asberry out of the transfer portal from Texas State was the fact that Asberry shot 40% from 3 the past two seasons with the Bobcats. Well, Thursday he was 0-for-4 from deep — but he did nearly everything else great.

I wouldn’t count on him shooting 0% from 3 for the entire season, and if he can add that to his tough-nosed defense and quick-twitch athleticism, the Pokes have themselves a player.

His defensive effort was particular impressive. It’s one thing to possess the athleticism Asberry possesses (evident by a few flashy second-half dunks), but to be as active as he was on the defensive end was the icing on top.

At one point in the first half, he had a ball handler treading water for his life before he pulled up just to have Asberry stuff his shot.

For the first time since Nov. 25, 2020, Chris Harris played in a competitive basketball game.

It’s been a long road back for him recovering from back-to-back knee surgeries. The last time he played was Cade Cunningham’s first game as a Cowboy. And before that, he missed a good chunk of his freshman season with injury.

He finished Saturday’s game with eight points in 13 minutes. He was 1-for-1 from 3 while also having an assist and a pair of steals. It’s a feel-good moment for the stickiest of glue guys on the team.

“It was good,” Boynton said. “It’s been a long journey for the kid. You gotta remember, prior to playing in [Cade Cunningham’s college debut], he was injured going into that season because he got hurt his freshman year midway through conference play. So, it’s been really more than two years since he’s been out there. Now, this wasn’t a regular season game, so there’s a different kind of feel, but it was good to see him out there, and he seemed to be comfortable and confident on his leg and just playing the game normally.”

There isn’t a ton to breakdown basketball-wise from a 34-point beatdown of a Division-II school, so let’s talk a little conference realignment.

ESPN reported this week that the Big 12 was in talks with national power Gonzaga about the Bulldogs potentially joining the league. Here is what Mike Boynton had to say on the thought:

“So I haven’t heard anything official,” Boynton said. “Obviously I pay attention, so I saw those reports. No one ever asks me except you guys. I won’t have a say in what happens. I have a lot of respect for their program. Obviously they’ve been one of the preeminent programs nationally for some time now. If it happens, it’ll be another challenge in what’s already a strong league. I wonder who’s next? Is it the Utah Jazz or the New Orleans Pelicans.”