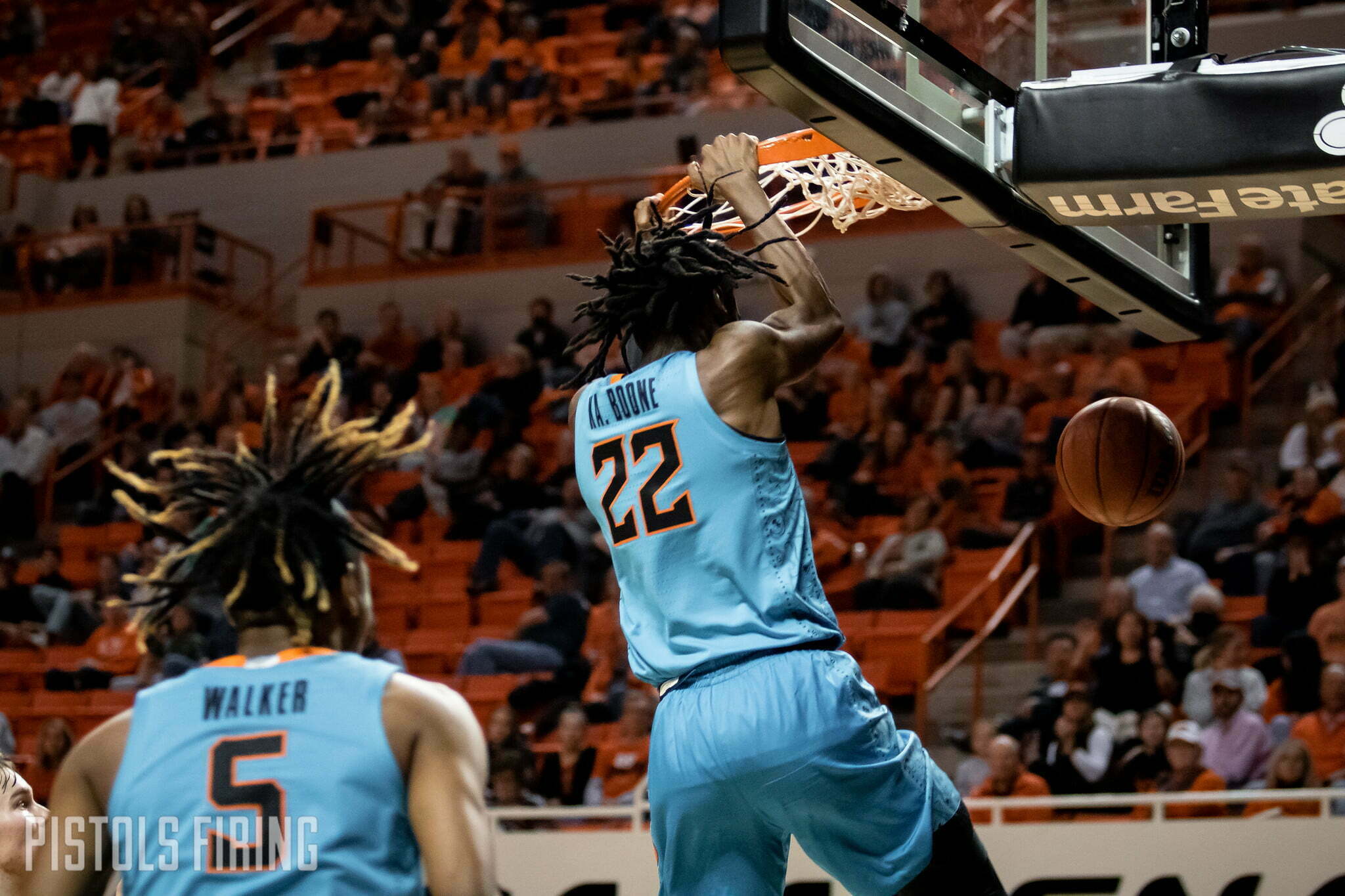 STILLWATER — A team finally tried to run with the Cowboys — and it didn’t go well for that team.

Oklahoma State throttled Charleston on Monday night in Gallagher-Iba Arena, winning 96-66. The Cowboys outscored the Cougars 53-30 in a second half full of Pokes trying to rip down rims. OSU had nine dunks, most of which came in that second half.

It was tightly contested going into halftime, where OSU had a 43-36 lead. However, the Cowboys started the second half on a 14-5 run before adding a pair of 6-0 runs and a pair of 7-0 runs. The rout was truly on.

The phrase “Lob Stilly” has been like Texas football in recent years. It has been said to be back but not actually been back.

Well, it’s officially back — Lob Stilly, that is, not Texas football.

The Cowboys converted four alley-oops Monday night, bringing the season total to nine in just six games. What used to be Marcus Smart lobs to Markel Brown and Le’Bryan Nash have turned into Avery Anderson, Isaac Likekele and Bryce Williams throwing it up to Moussa Cisse and Kalib Boone.

The most impressive alley-oop from Monday came with time ticking down in the first half. Likekele threw a ball (intentionally or not) off the backboard, and Cisse grabbed it and threw it through the rim.

Cisse converted three of the four oops on the night to Kalib Boone’s one. There are even more capable oop-catchers on the team like Matthew-Alexander Moncrieffe, Tyreek Smith and Bryce Williams. Avery Anderson has some bounce, too, which would be fun given his height.

“It’s back,” Boynton said. “We got a few more lob plays we haven’t shown yet, but none of them go off the backboard.”

Teams have shot a poor percentage on OSU this season, and the fact that a lot of shots don’t even get past the defender guarding the shooter is a reason for that.

OSU blocked 16 shots Monday, tying a school record set back in 1989. Cisse and Boone combined to stuff 11 shots, with Cisse setting a career-high with six. Matthew-Alexander Moncrieffe swatted a pair of shots, and Bryce Williams, Tyreek Smith and Woody Newton all had one. Williams got a technical foul after his blocked ended up in the stands and he let the shooter know about it.

Charleston narrowly shot 30% (29.5%) from the field. None of OSU’s opponents have shot higher than the 39% Oakland shot. For reference, OSU has shot below 43% only once this season.

The Cowboys entered Monday’s game shooting just 28% from 3-point range, but shot 50% against the Cougars.

I’ve mentioned throughout the preseason and in the early parts of this season that 3-point shooting can take this team from good to great. OSU has guys who can make 3-point shots, but not the sharpshooters of Thomas Dziagwa, Phil Forte, Keiton Page or Randy Rutherford.

A night like Monday could be a catalyst for getting things going.

“It’s always confidence,” Boynton said. “Some guys just have supreme confidence, like Thomas Dziagwa, and they don’t mind going 0-for-7. Some people go into a shell if they go 0-for-7. He was going to shoot 15 more, contested or not. Just consistent, consistent reps for those guys and seeing the ball go in the basket more frequently on a night like tonight, hopefully, they believe that that work is what made that opportunity exist for them and they show up tomorrow and put the same type of effort in for it.”

Through the first three games of the season, Mike Boynton kept almost everyone in his rotation. That isn’t the case six games in.

Woody Newton played just four minutes Monday, when the game was well in hand. Tyreek Smith (who has been ridiculously efficient per 40-wise) played only seven minutes. Bernard Kouma played just one minutes, and Donovan Williams, who is dealing with a hand injury, didn’t play at all.

The sample size is still small, sure, but this cut has allowed other players to find rhythms throughout the game instead of playing for short bursts at a time.

“It’s hard,” Boynton said. “We got 14 guys on scholarship, right, and a really, really talented group. It’s hard to play that many guys, otherwise you have a rag-tag game like we had against Prairie View, which is what we tried to get the point across to. Woody is going to be a really good player. He just has to kinda wait his turn right now. You never know when that opportunity is going to arise. It’s a game where people get injured or sick, whatever. If you stay engaged mentally and you practice well, then when your name is called you’ll have an opportunity to impact the game. I’m glad he was able to get out there a little bit tonight to keep himself in some rhythm.

The rotations might have been trimmed a tad, but this team is still ridiculously deep.

This team is dangerous in that a defense can’t key on one particular player or even a position group — guards, posts, anyone can go get 20 on any given night.