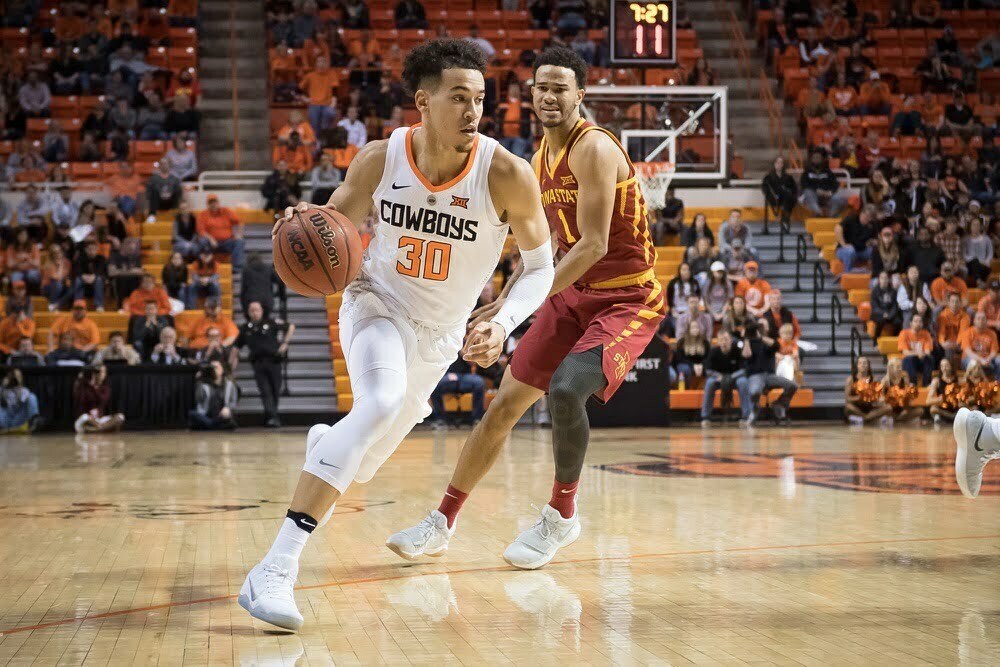 Oklahoma State (somehow) escaped Iowa State for the first time in the last 11 tries on Saturday and beat the Cyclones 96-87 in overtime. Saturday’s game had pretty much everything. Put-back dunks, questionable non-goaltending calls, Big Daddy™ 3-pointers, the preseason All-Big 12 first teamer playing like it and enough #content to fill up the @Big12Refs timeline for six months.

Jeffrey Carroll led the way for the Pokes with 24 points and 8 rebounds while Kendall Smith added 20 points, 5 rebounds and 5 assists and played probably the best game of his short career in Stillwater. For Iowa State, Donovan Jackson 30 points and 5 boards, and Nick Weiler-Babb had 12 points, 9 rebounds and 11 assists. At times, it seemed like OSU didn’t have an answer for either one.

Five thoughts on a wild one in Stillwater.

1. Smith and Carroll took over

Of Oklahoma State’s last 25 points, Carroll and Smith scored or assisted on 21 of them. When it got dark late — ISU was up 76-68 with 3:36 left — Boynton turned to his two most experienced players. I think there’s a (possibly contrarian but interesting) case to be made for Tavarius Shine as OSU’s best player right now, but with the chips down on Saturday and the game on the line, No. 30 and No. 1 showed up.

Oklahoma State’s defense is very good, I’m told. But man … they could not get any stops from the last five minutes of the first half until overtime. I think part of the problem is that they lack a true lock-down defender. They have several guys who could play the role, but nobody who is specifically designated to fill the spot. I’m not positive they have a “hey, go shut down that guy” guy.

Lot of options for #OKState's MVP tonight, but I'll say this: Tavarius Shine has done an unreal job of staying step for step with Donovan Jackson down the stretch. Won't even let him get the ball.

Jackson was 8-for-12 from the field and 6-for-8 from 3-point range, and OSU treated him for most of the second half like he was an afterthought. Iowa State was literally 0-for-the rest of the team from deep. He was their only offense, and until Shine stepped up at the end of the second half, nobody seemed too concerned about it.

Also, thankfully for OSU, Iowa State really can’t get stops. The Cowboys’ offensive rating (points per 100 possessions) was 109.7 on Saturday. That’s right at their average, which might not seem that poor for the Cyclones. But remember, OSU went like 35 actual minutes of real time towards the end of the first half and only scored 2 points.

3. The officiating was amazing

Look, I get the missed calls, but it does seem to be the case within the Big 12 that its referees get put in unique, absurd positions. Saturday it was an end-of-game clock that didn’t start following a goaltending by Iowa State that was both A. Not called and B. Not reviewable.

I would never in a million years willingly choose to be a college basketball referee for my profession, but that end-of-regulation sequence was not the greatest look.

This entire game has been an abomination when it comes to officiating. Both sides have reason to be furious.

It’s only January, but the @Big12Refs are in March form.

Mitchell Solomon had 14 points, 9 boards and 4 assists and shot 86 percent from the field. All of this is remarkable, but what’s really remarkable is that OSU was comfortable feeding him late. He had 6 of his 14 points in the last nine minutes and looked like he wanted the rock with the game on the line. It was fantastic!

Your wins can only be so big when you’re probably going to have a losing record in the Big 12 Conference, but losing this game at home as a big favorite would have been a real dent in the psyche of both a fan base wary of new coaches and a basketball team searching for its 2018 footing.

To get that win when you were down eight with under four minutes left is not only salvation from being the first 0-3 Big 12 team, it provides a momentum boost you weren’t expecting. I don’t know how the rest of the season will play out, but maybe Carroll needed this one to snap him back into place. Maybe Smith realized what he can do when he gets to the bucket. Maybe Solomon is a real offensive threat.

Maybe not, of course, but last year’s OSU team went 0-6 to start the Big 12 and still made the NCAA Tournament. This year’s team doesn’t have Jawun Evans, but it does have a head start on last year’s record. That end-of-game sequence followed by the explosion in overtime provided at least a little hope. And a little hope is one thing this team could use.

Line on this game was 7.5, for those into that sort of thing.