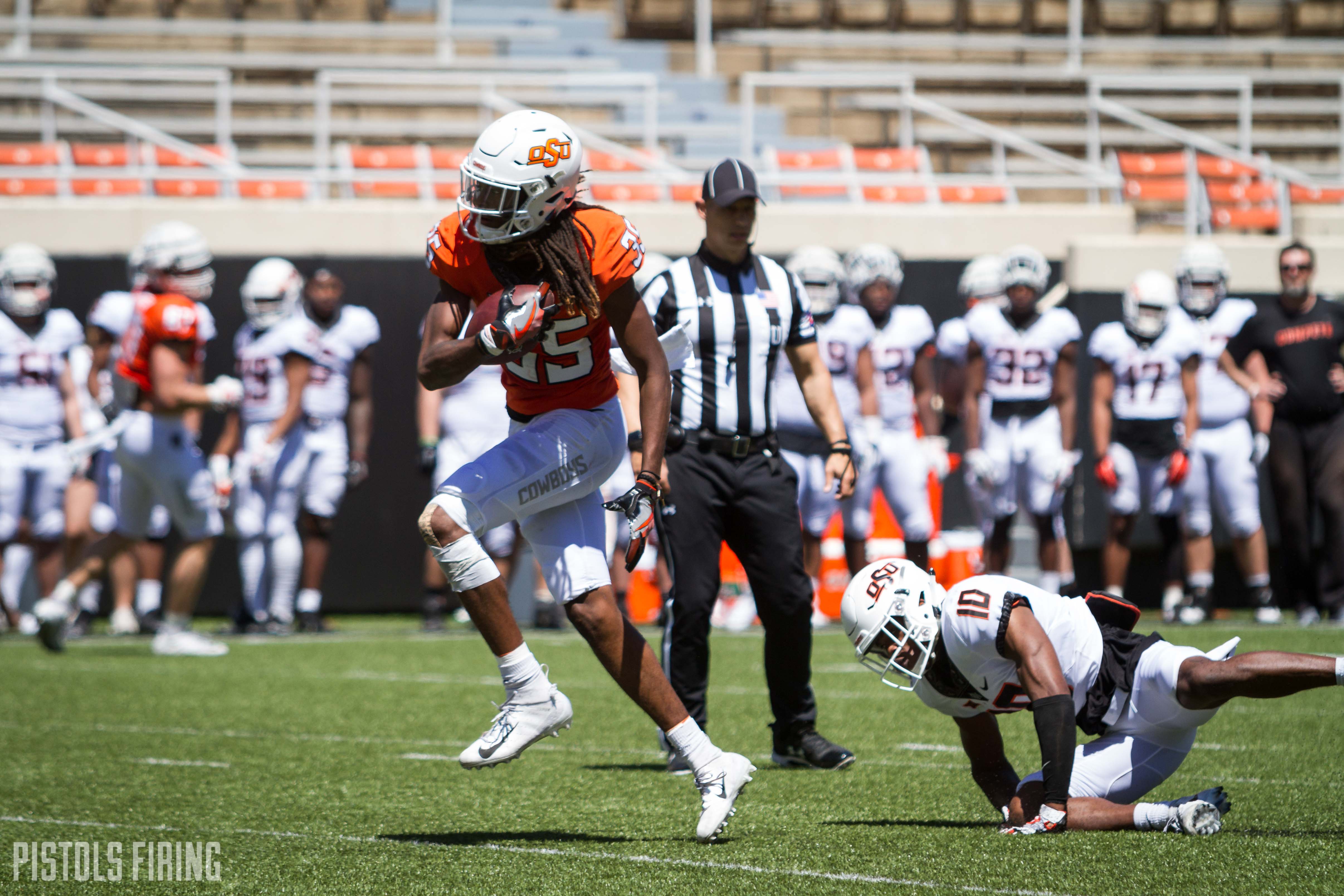 STILLWATER — With Saturday’s spring practice completed, the Cowboys spring work has come to an end.

There was no score and only self-kept stats from Saturday, but finally the world got to see what the Spencer Sanders/Dru Brown quarterback battle looks like. Here are five (initial) thoughts from a warm Saturday in Stillwater.

I came into Saturday expecting to be able to tell who the favorite was in OSU’s quarterback battle, and I left unsure.

The position battle is legit. It’s a small sample size in the grand scheme of things, but for most of the practice, I thought Dru Brown was better on the day. That was until he threw an interception in the end zone at the end of his two-minute drill, just in time for Sanders to roll down the field and throw a touchdown pass.

Sanders had some questionable throws earlier in the day, namely his interception during 7-on-7. They both also made plays, though. There were plenty of pretty balls and some beautiful pocket navigation, but it wasn’t always consistent.

Gundy has harped throughout the spring that he needs them to play within the system and take care of the ball before they start trying to make plays on their own. Gundy used Brown’s interception as an example, as it came on first-and-goal, so the offense still had a few more downs to score if he had just thrown the ball away. Gundy said they don’t need to feel like every down needs a big play.

Some of that need they have probably comes from the fact that they are battling to be QB1, so there’s probably a thought process of, “If I make this play, I’ll stand out.”

My takeaways from each …

Brown: He seems the calmer of the two (likely from his experience) and is solid and surgical on short-to-medium throws. He is obviously shorter and isn’t as fast as Sanders, but can still make plays with his feet.

Sanders: The kid is crazy athletic. He can chunk it downfield or fly past a defender on his feet. Again it was a small sample size today, but sometimes it looked as if he traded accuracy for power in some of his short game.

You hate to overreact to a spring game… but is CJ Moore already the greatest receiver in OSU history?

C.J. Moore was a single-coverage terror Saturday, making a handful of catches over defenders. It started in the 7-on-7 portion of the practice when Moore came away with a toughly contested ball against Kemah Siverand. Moore did it again a few minutes later, this time in the end zone off a Dru Brown pass.

Next came a one-on-one drill putting receivers against defensive backs. In that drill, Moore showed he was more than just a jump ball king, as he beat Bryce Balous on a crossing route. Balous wasn’t within 10 yards of Moore when Moore caught the ball.

Moore also caught a slant route in the scripted scrimmage where he galloped to the end zone. They weren’t tackling during that part of the practice so it’s tough to tell if he actually would’ve scored, but nonetheless, it was an overall solid day for the redshirt freshman Moore.

Gundy said Moore will probably need another year before he is ready to play 55 or 60 snaps a game, but he will obviously contribute this season.

“He should be able to give us a number of plays early in the year, and we’ll see how he develops in life situations,” Gundy said.

A highly touted, in-state recruit, Moore had a lot of hype surrounding him since he got to campus. Saturday was the first time Moore was able to show his potential to those outside the Sherman E. Smith Training Center walls, but his performance Saturday was no surprise to those who have seen him every day.

“He’s made plays throughout spring,” Dillon Stoner said. “He’s going to continue to make plays and keep taking steps in the right direction.”

3. Dillon Stoner on the Outside

With the possibility of Moore not being ready for a full game’s workload, there are still some snaps open on the outside opposite Tylan Wallace.

There are plenty of receivers-in-waiting: Moore, Patrick McKaufman, Braydon Johnson, Jonathan Shepherd and the incoming Langston Anderson. After Saturday’s practice, though, Gundy also mentioned the possibilities of veteran inside receiver Dillon Stoner getting some work out there.

“When we get into the middle of August, we have to make a decision and go with it,” Gundy said. “The good news with Stoner is, is he can play every position, so if we needed to make a move, we certainly could.”

At 6-foot, 198-pounds, Stoner wouldn’t be the biggest outside receiver, but he could still be effective through solid route-running matched with his athleticism.

“Coach Dunn is a great coach, getting everyone comfortable with where they need to be,” Stoner said. “Wherever I can help the Cowboys is where I’m gonna go.”

When Jelani Woods was in a half-squat position in the backfield, he was as tall as Dru Brown.

Woods, who is 6-7, 265, was solid in 2018, but he looks even more monstrous now. If OSU has trouble getting extended snaps out of a fourth wideout, which is unlikely given how many options they have, it’ll be easy to throw Tylan Wallace, Landon Wolf and Dillon Stoner out there with Woods roaming around the line of scrimmage.

“Jelani should develop into a really nice player for us this year,” Gundy said. “He’s one of the guys we talked about last year, and if you remember, I said he’s probably a year away from starting to show up consistently. He’s now starting to show up.”

There are a lot of people who can get score for the Cowboys this season.

There’s the obvious Tylan Wallace and Chuba Hubbard. There’s Stoner, Wolf and Woods. C.J. Moore was a stud today. Jonathan Shepherd made a few plays. Braydon Johnson had a couple of nice catches. Gundy said Patrick McKaufman is probably 70 percent right now, but at 6-6, he could be a monster. LD Brown, Jahmyl Jeter and Dezmon Jackson all look good, and there are two quarterbacks who can throw and run.

That’s a lot of fun new toys for offensive coordinator Sean Gleeson to work with.