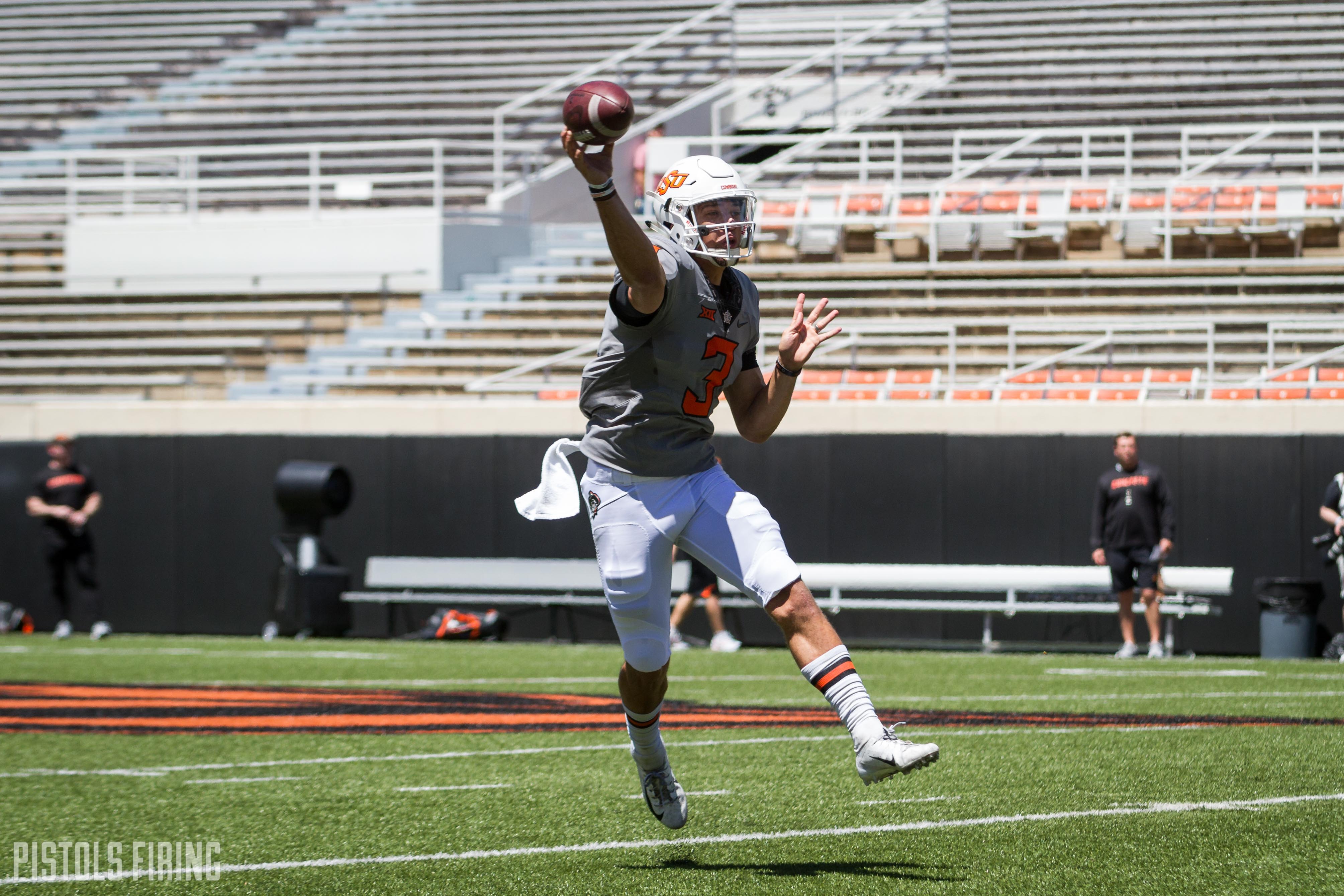 STILLWATER — There might be no definitive winner in the quarterback battle between Spencer Sanders and Dru Brown.

After Saturday’s open spring practice, where Brown and Sanders split reps, Gundy said there is a possibility that Oklahoma State uses both quarterbacks in 2019.

“We could,” Gundy said. “If somebody wins the job, then we’ll certainly say, ‘You’re the quarterback.’ If both of them earn the right to play, then we could very well play both.

“Last year, I said from Day 1 that Taylor was going to be our quarterback. He just had too much experience and understood our offense. This year, you’ve got two guys who don’t have any experience at all, and their reps have been equal.”

Both made plays and mishaps Saturday. They each got two sets of five plays in a 7-on-7 drill. In their first sets, each quarterback went 4-for-5. Sanders probably delivered the best throw of that set, a deep fade route where C.J. Moore Mossed Kemah Siverand.

On their second sets, Sanders was 2-for-4 and Brown was 2-for-5. Sanders threw an interception to A.J. Green on his first pass of that set, and he ended the set with another interception, but that one was waved off after a defensive holding call. Brown also threw a fade to Moore in the corner of the end zone that Moore again made an outstanding play on.

One of the highlight reel plays of the day came in the scripted scrimmage portion of the practice. Dru Brown had what started as a read option with LD Brown. Dru kept the ball and ran to his right where he sliced a ball around a jumping Jarrick Bernard to Landon Wolf.

Wolf on the loose! ? #okstate pic.twitter.com/MC9bTHUtzu

It looked as if Brown had won the day, until his final throw. On a first-and-goal in the two-minute drill portion of the practice, Brown heaved a ball toward the corner of the end zone that Green cooly picked off.

A.J. Green comes up with a pick in the end zone for the #OKState defense! pic.twitter.com/zm53HdZrnc

Nice grab by Tyrell Alexander on the pass from Spencer Sanders! #okstate pic.twitter.com/pltYvJnjo0

After what looked a better day for Brown at first, the two seemed equal again.

“There’s been days Spencer has played better; there’s days that Dru played better,” Gundy said. “Again, they need to learn to orchestrate, distribute the ball in our offense first and then get into making plays on their own.”

The public has only seen one portion of the ongoing quarterback battle, and in the grand scheme of things, this portion won’t be the tell-all. There is still battling to do between the two until a surefire winner comes out, if he ever does.

“We’ll let the thing run through the summer and into August,” Gundy said. “As soon as we feel like that we know that the guy that gives our team the best chance for success, then we’ll say, ‘You’re the quarterback.’ Then we’ll move on.”