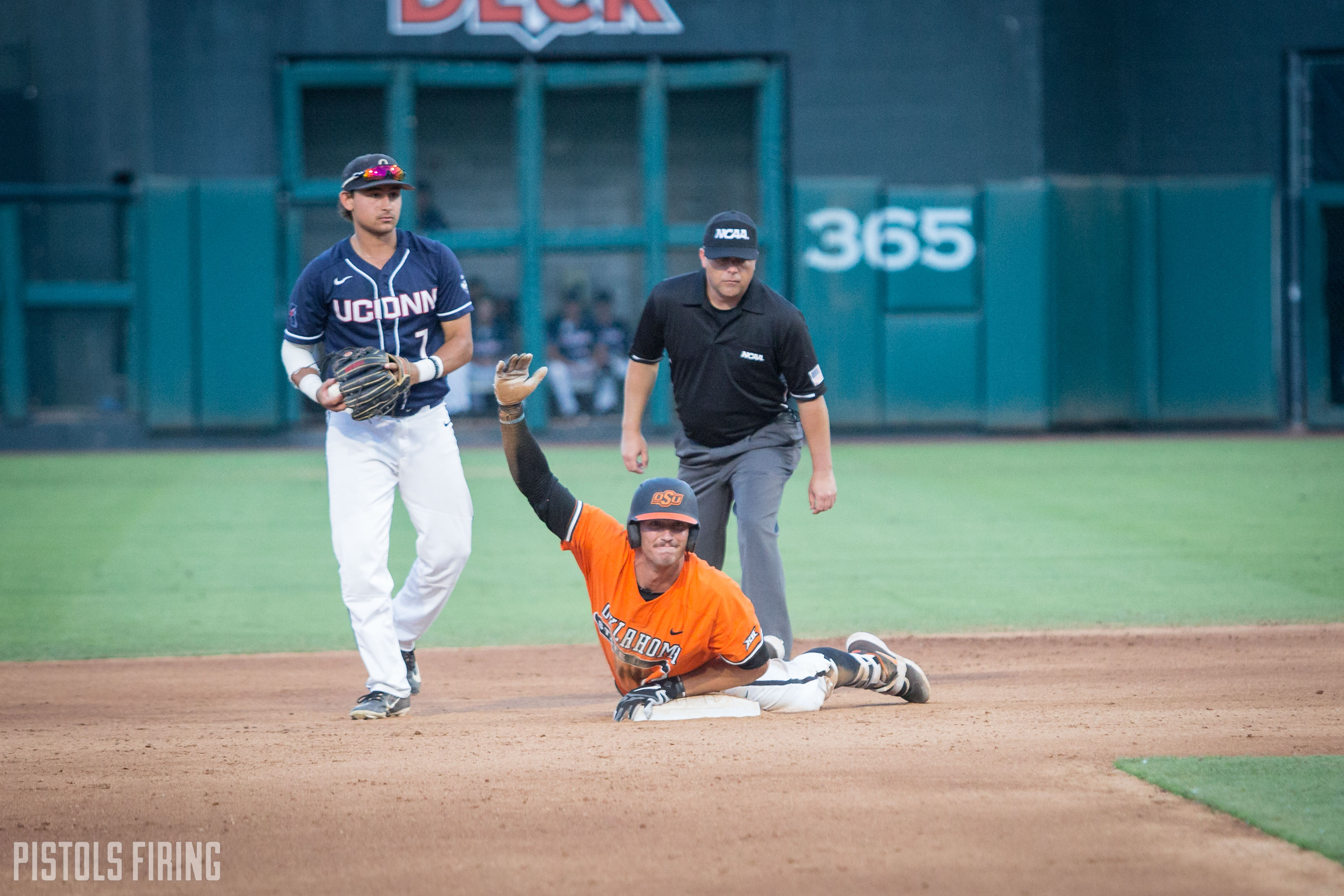 OKLAHOMA CITY — For the first time since 2016, the Cowboys are headed to an NCAA Super Regional.

The Oklahoma State baseball team defeated UConn 3-1 on Monday in Bricktown Ballpark, making the Cowboys Oklahoma City’s NCAA Regional champion. Monday’s game was a bit slow developing, and UConn struck first in the top of the fifth. In the bottom of the frame, OSU tied it up and scored its game-winning runs in the sixth. Here are five thoughts from Monday.

Carson McCusker left his mark on the left-field wall.

OSU’s junior outfielder had his fair share of run-ins with that stingy fence Monday, and all were probably equally important. It climaxed with McCusker’s two-RBI double in the sixth to give the Cowboys the lead. With Trevor Boone on third and Bryce Carter on second, McCusker pulled an 0-1 pitch over UConn left fielder John Toppa’s head, and the Bricktown Ballpark crowd went nuts.

“Bryce and Trevor both had great at-bats before me, and I knew that guy was gonna pitch to me because Alix had a great swing earlier that day and hit a home run,” McCusker said. “So, I just went up there, told myself not to do too much and came through.”

McCusker’s original meeting with the fence might have been the most athletically impressive. With runners on first and third and two outs in the first inning, McCusker used his massive 6-foot-8 frame to snag Christian Fedko’s foul ball that was headed over the fence. Although it wasn’t exactly McCusker robbing a home run, it still got the Cowboys out of a sticky start.

#okstate Carson McCusker with a snag at the wall @OSUBaseball pic.twitter.com/4E4YD2gXm0

The catch happened so far deep in the corner that not a lot of people in the ballpark actually saw it, including OSU’s dugout on the third-base line.

“I didn’t get to see it either,” OSU coach Josh Holliday said. “When he disappeared, I just looked to the crowd to see how they reacted. When people stood up, I knew he caught it.”

McCusker vs. Wall II: Return of the Wall came in the fourth, when he saved what would’ve been a sure double a few feet from his first body mark in the wall’s padding.

With the grace of a gazelle…

He also proved to be able to make sick catches without a wall in the sixth.

2. Weird Play That Could’ve Been Disastrous

In the bottom of the first, Christian Funk hit a pop fly to right. Hueston Morrill, who reached on a leadoff single, stood between first and second waiting to see if he needed to go tag up.

UConn right fielder Kyler Fedko originally caught Funk’s fly ball, but it fell to the grass as he transitioned it from his glove to his throwing hand. It was a quick process, as Fedko looked to come out firing to try to get Morrill out at first. When Morrill saw the ball hit the ground, though, he took off for second.

There was quite a bit of chaos happening as Morrill stood on second and Funk on first. First-base umpire Ray Gregson was waving his arms, imitating a player taking a ball from a glove. The UConn defense didn’t know where to go with the ball, originally throwing it to second where the Huskies slapped a tag on Morrill before throwing it back to first.

After everything somewhat calmed down, the umpires met together in the middle of the field for about five minutes. From there, they brought both coaches out and talked for a bit before going to the headset.

After the near 10-minute ordeal, it was ruled that Morrill and Funk were out, as Fedko caught the ball but dropped it after the fact. Morrill never tagged up at first, thus he was out too.

“It is what it is,” Holliday said. “When that leaves the field of play, and it goes to a headquarters where somebody’s watching the game, there’s nothing you can say as a coach. Just accept what happens and move on.”

It ended up not meaning anything, but there is a drastic difference between having two on and no outs and having none on with two outs. I’m sure this isn’t the first time in the history of baseball this has happened, but it could set a weird precedent of future outfielders intentionally dropping balls in transition to make the runner not tag up. It was just a freak play Monday night, and luckily for the game, it didn’t have an impact on the outcome.

3. Lienhard Lays It All Out for Senior Season

As John Toppa’s fifth-inning bunt attempt looped toward the third-base line, Joe Lienhard risked it all in his senior season.

Lienhard used most if not all of his 6-5 frame to get his glove under the ball before it landed, recording second out of the inning.

After his sudden impact with the OKC grass, OSU pitching coach Rob Walton made a mound visit.

“He was just giving me a little bit of a breather,” Lienhard said. “He wanted me to get back into it. I definitely exerted some effort into that play.”

Monday was a terrific outing for Lienhard, in what could’ve been his final start of his OSU career. He finished having thrown six innings where he allowed one run off five hits to go with four strikeouts.

His previous start came last Saturday, and it didn’t go well. In the same park, Lienhard allowed four runs off six hits in two 2/3 innings against TCU in the only Big 12 Tournament game the Cowboys lost, but he got to avenge himself Monday.

“I knew, in an elimination game, being a senior, I just want to do anything I can to help our team win,” Lienhard said. “I just went for it.”

Morrill is OSU’s leadoff man, so his ability to get on base is somewhat expected. Yet still, Morrill is only a freshman.

As for the other two, McCusker bats seventh in OSU’s lineup, and Garcia is a slot behind him in the eight hole. Garcia had the Cowboys’ other RBI, one he scored himself, when he crushed a ball into OSU’s bullpen in the fifth inning.

Despite being at the bottom of the lineup, McCusker and Garcia lead OSU’s starters in RBI this season. They are the Cowboys’ only starters hitting above .300, as McCusker has a .312 batting average and Garcia is hitting .301.

The Cowboys got drilled three times in Lubbock at the end of April.

Since, it’s been like a movie script as OSU has worked its way back to the west Texas town. Since that series, the Cowboys are 14-3 and have played only two games in their home ballpark. They’ve swept the defending national champs on the road, they won a Bedlam series, they beat Baylor twice, they won the Big 12 Tournament and now an NCAA Regional. All of that just to get back to Lubbock for another shot at the Red Raiders, this time in a Super Regional.

“We’re a different team than we were when we went there,” Holliday said. “We’ve grown leaps and bounds, and we’ve had moments and experiences that have helped us grow from that. That series helped us. It forced us to either go all in or just float off like the rest of the teams that don’t really, really have that investment. That series helped us.”

The combined score of the teams’ regular-season series was 27-8 Tech, a thought sure to leave a bad taste in the mouth of the Cowboys. That series doesn’t matter anymore, as only the Big 12 regular season champion or the Big 12 Tournament champion can go to Omaha.

“I want to play them, and I’m ready to play them,” McCusker said. “I think a lot of guys in the clubhouse are ready to get them.”