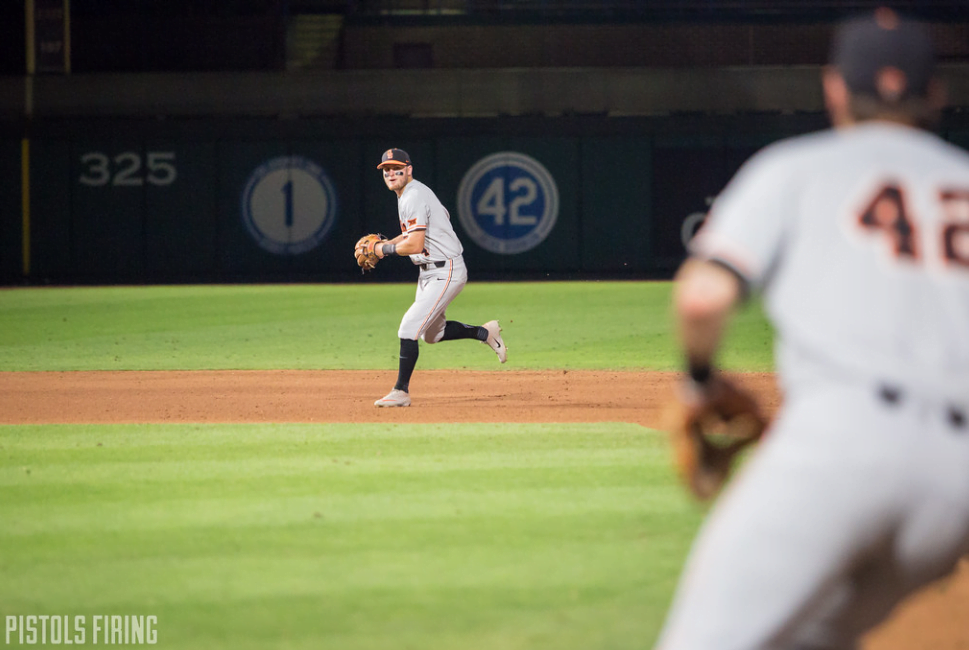 Saturday could be the last Cowboy baseball game this season.

Oklahoma State fell to Texas Tech 8-6 in Game 1 of the teams’ Super Regional series Friday in Lubbock. The Cowboys were constantly playing from behind in the game, but they also never let Tech get too far away.

The Cowboys’ season record for strikeouts grew by 15 on Friday.

OSU batters have now struck out 624 times this season, and Friday was the Cowboys’ ninth game this year with at least 15 Ks. It’s part of the boom or bust offense that has led the Cowboys this far into the postseason, but knowing that doesn’t make it look much better as it’s happening.

2. First Round Pick With Reason

The Texas Rangers took Tech shortstop Josh Jung eighth overall in the MLB Draft on Monday. Friday, he proved why that looked like a good decision.

Jung (pronounced “young”) went 2-for-5 with a home run and some solid defense.

In the top of the eighth, Jung saved what could’ve been a game-tying run with this diving stop up the middle:

What a play to keep it a 1-run game in Lubbock!#RoadToOmaha #SCTop10 | @TTU_Baseball pic.twitter.com/czve2ZnzRZ

His home run came in the seventh. Jung was the leadoff batter that frame and crushed the first pitch he saw to straightaway center.

The Red Raiders scored four runs on plays that started with two outs.

The instance that will be talked about the most came in the fourth, when Trevor Boone couldn’t bring in a pop fly that would’ve ended the inning. The play came with runners on first and third and Tech first baseman Cameron Warren at the plate. Warren’s pop up went to shallow center, as three Cowboys ran toward it. Boone got his glove on it at knee-height but couldn’t hold on, and two runs scored.

The Red Raiders’ scoring started with two two-out runs, as well. In the second inning, Dylan Neuse had a two-out single with the bases loaded.

4. Cowboys Keep It Close but Can’t Get Game-Altering Swing

OSU was constantly there, but the Cowboys just couldn’t get that one go-ahead play they’ve found in their past few games.

It looked as if that play could come in the seventh, as Colin Simpson stepped in the box with two outs and the bases loaded. But, his long fly ball was caught on the warning track in center field.

In the eighth, down a run, Trevor Boone stood on second when Alix Garcia grounded out to short (that Jung diving stop).

Then in the ninth with Hueston Morrill on second, Simpson struck out, ending the game.

When these teams met in April, Tech won those three games handily, so the Pokes are headed in the right direction, being only a swing away. But now the Cowboys have to beat Tech twice in a row despite being 0-4 against them to this point.

5. Alix Garcia Hits a Ball Back to Stillwater

On the TV broadcast, it was hard to see where the ball Alix Garcia hit was because the Tech outfielders weren’t moving.

With the cameraman also not knowing where that thing was heading, it wasn’t until the ball dropped back into frame beyond that tree when I realized it wasn’t a foul ball.

Garcia, a junior first baseman, has seven hits in his past four games. He was 2-for-4 with two RBIs Friday.

The Cowboys’ season is on the line Saturday.

The teams’ will meet in Game 2 of the Super Regional at 5 p.m. Saturday. It’ll likely be Parker Scott against Caleb Kilian in the pitching matchup. Scott wasn’t great in his most recent outing, only making it two innings in his start against Nebraska before Jake Lyons came in and cooled off the Husker bats. Lyons threw Friday, so he likely won’t be available for another long relief session in Game 2.

In his first outing against OSU this year, Kilian held the Cowboys to two runs in his six innings of work. In that same game, Scott allowed four runs in four innings.

The Cowboys have obviously somewhat closed the gap since then, but they’ll need to close it the rest of the way to win two of the next two and advance to the College World Series.

Hopefully by Saturday, Easton Murrell will get a new hand:

And Christian Funk will get a new bat: