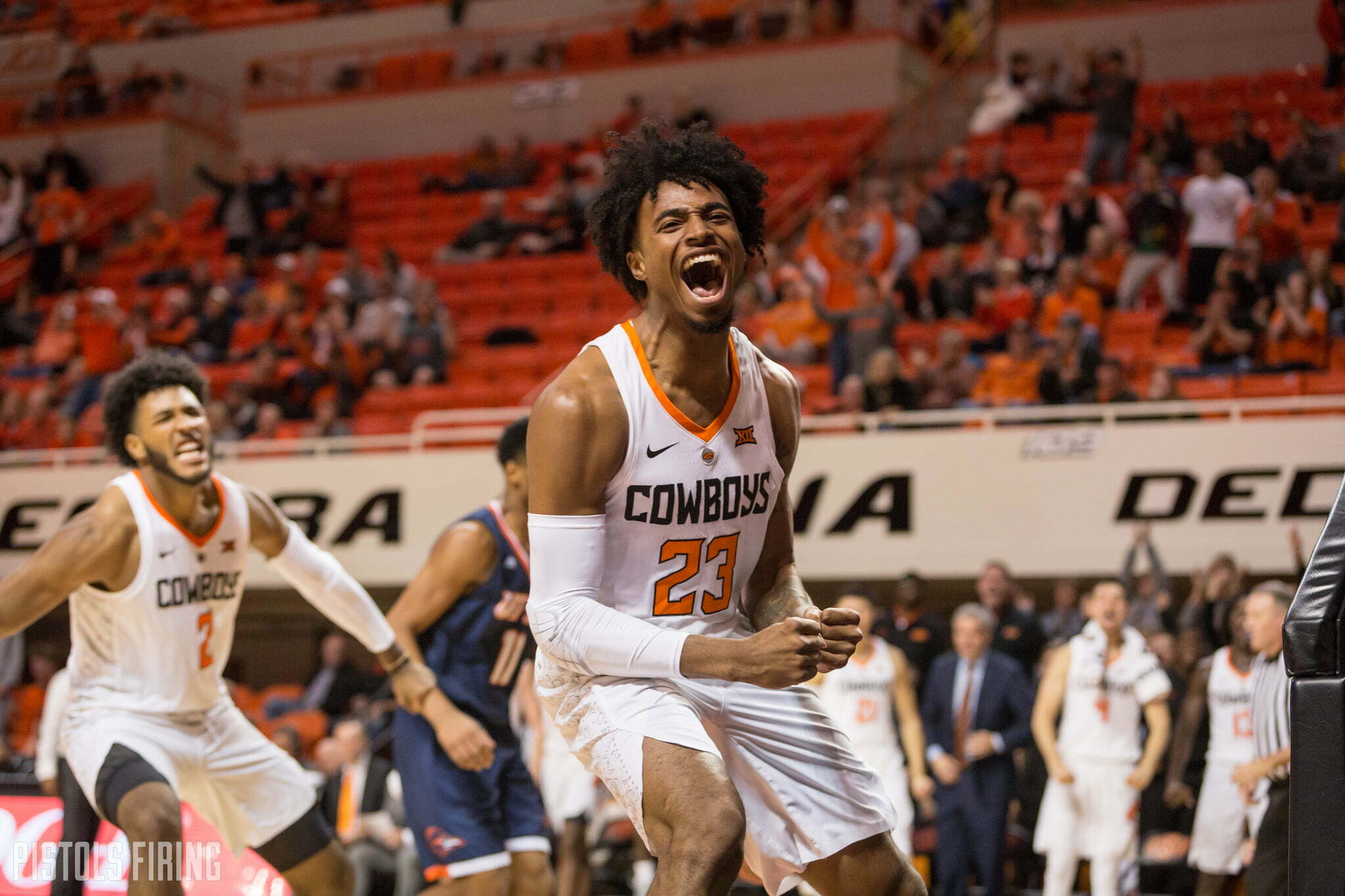 A win against the College of Charleston probably won’t jump out on a tournament resume to the uninformed, but the Cowboys beat a good basketball team on Sunday.

Oklahoma State topped the Cougars 70-58 in Gallagher-Iba Arena to improve to 2-1 this season. It was Charleston’s first loss of the season, and the Cougars won the CAA and made the NCAA Tournament last season.

This game will be remembered as Michael Weathers’ debut. He actually debuted Wednesday against UTSA, but he got only three garbage-time minutes. Weathers looked as good as advertised, finishing with 16 points on 75 percent shooting.

This was OSU’s last home game of November, as the Cowboys head to Orlando next week for the AdvoCare invitational.

Here are five thoughts from Game 3.

1. Welcome to the Michael Weathers Show

Michael Weathers played his first meaningful minutes since the 2016-17 season, and it was worth the wait.

Weathers and Yor Anei were the first players off the OSU bench with 14:43 left in the first half. Weathers played in the Cowboys’ win against UTSA on Wednesday, but it was the final three minutes of the game with the contest already in hand.

Weathers finished with 16 points, which tied Cam McGriff for a team-high, on 6-of-8 shooting (!!!). He also grabbed five rebounds, had two assists, a highlight reel block and two steals with four turnovers. He provided a sense of calming to the team it seemed. His ability to get to the bucket is something OSU didn’t do as much in the first two games, as the Cowboys have relied on outside jumpers (we’ll get to that).

Need someone who has the vision and passing ability to find a guy across the court? Weathers.

Shoot he even makes his mistakes look good. After this lazy pass, Weathers will probably find himself on SportsCenter tonight.

2. Cam McGriff is a Mad Man

I haven’t written about Cam McGriff as much as he has warranted this season.

McGriff is OSU’s leader in everything from points scored to charges taken. I’m not sure if charges taken is a stat that is kept nationally, but McGriff has taken five in three games. He can do it all.

McGriff started at center Sunday, as forward Duncan Demuth replaced center Yor Anei in the starting lineup. McGriff, who is 6-foot-7, was matched up against Nick Harris, who is 6-10 to start the game. Harris ended with no points, three rebounds and -11. McGriff had 16 points, seven rebounds and was +15.

It’s not only that he has a God-given frame and ability to hoop, but McGriff works hard. If there’s a 50/50 rebound, McGriff is in there at least making things difficult. He can shoot the 3, and again, he has taken five charges in three games. That’s more than the rest of the team combined.

In the Cowboys’ first four trips down the floor, they shot five 3s.

Of OSU’s 163 field-goal attempts this season, about 40 percent have been 3-pointers, but the Cowboys have made 46 percent of those. It’s a system that is more and more popular in basketball as scoring has moved away from the bucket, but it’s still a little uneasy for a team this young.

Five Cowboys took a combined 22 3-pointers Sunday. All but one OSU players who shot a 3 made a 3, with the outlier being Maurice Calloo who was 0-for-1.

The play style suits Thomas Dziagwa, who made four triples against Charleston and is up to 92 career 3-pointers. Dziagwa, a junior, has made 4.3 3-pointers a game this season, if he continues that pace, he’ll have 213 career triples by the end of the regular season. Phil Forte holds OSU’s career 3-point record with 329.

4. This Team Could Be Scary

Seeing how big an impact Michael Weathers made with his first meaningful minutes, made me wonder just how good this team can be when Mike Cunningham and Curtis Jones are able to play.

Cunningham, a graduate transfer point guard, has been day-to-day for the past few weeks with a hamstring injury. He went through the Cowboys initial warm-ups against Charleston, but when OSU returned from the locker room for the final time, Cunningham didn’t participate.

Because of NCAA transfer rules, Jones won’t be able to play until the end of the semester. The last day of finals at OSU is Dec. 14, which puts him eligible at or around the Cowboys game against Nebraska on Dec. 16.

Both will contribute key minutes, meaning this iteration of OSU’s team isn’t even in it’s final form.

5. Minutes Starting to Work Out

Boynton’s rotations are becoming marginally more clear, but with Cunningham and Jones returning, that’ll throw another two wrenches in all of this.

Here are the minute distributions from Sunday and the season as a whole.

So obviously Michael Weathers is on the rise, but it’s also interesting to see a dip in Maurice Calloo’s, Kentrevious Jones’ and Luke Major’s action.

Jones and Cunningham are both guards, so it’ll be interesting to see how Boynton attacks the season on their returns. He could go small and play McGriff at center more or chop up shifts with his guards. It’s kind of like the age-old draft decision if you go position of need or best available.