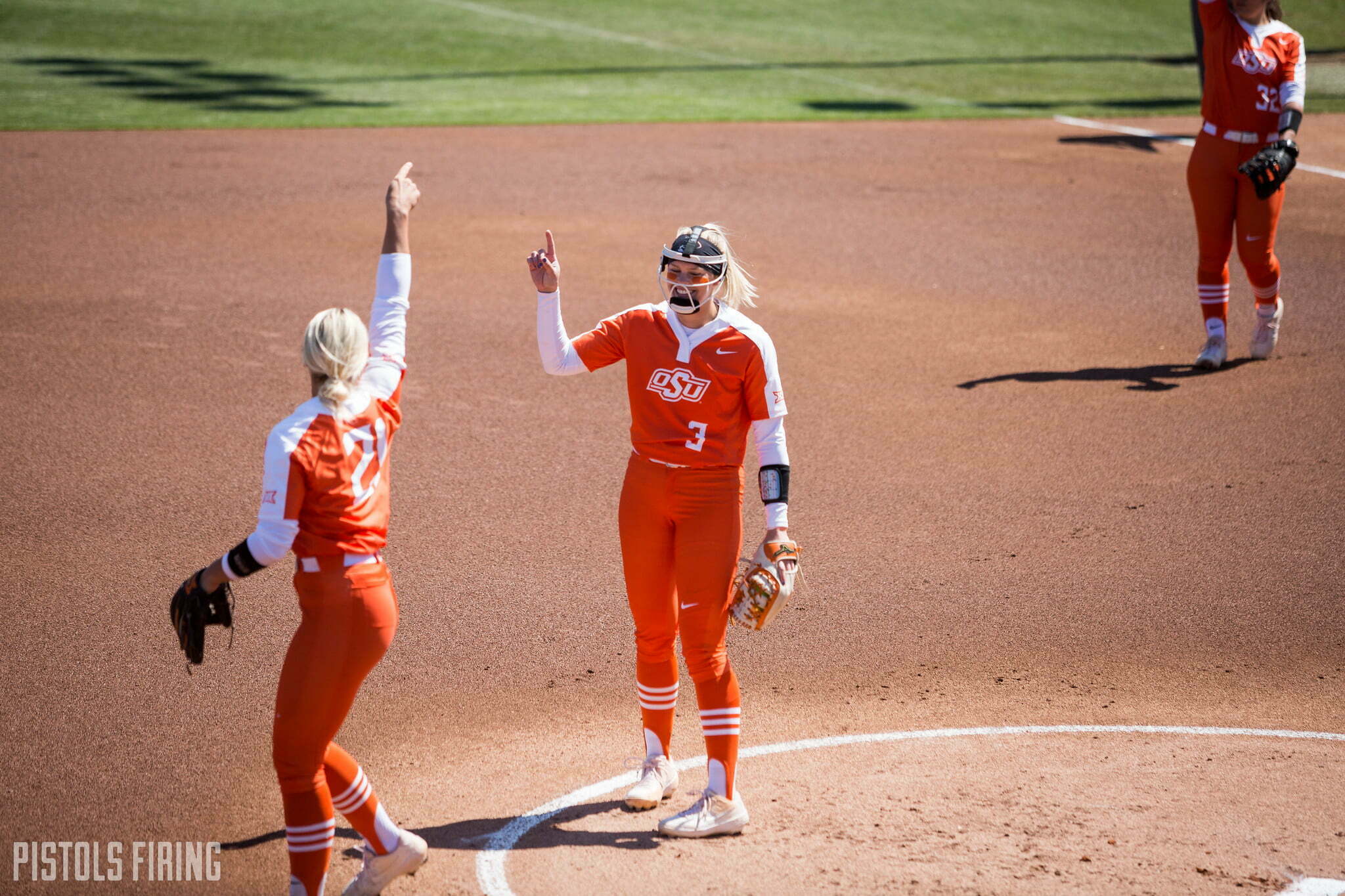 STILLWATER — The last time the Cowgirls made it to an NCAA Super Regional, the Oklahoma State football team won a Big 12 Championship the ensuing season.

The OSU softball team took down Tulsa 2-1 in the Stillwater Regional Final on Saturday in Cowgirl Stadium, making the Cowgirls a perfect 3-0 in the regional. The Golden Hurricane took a first-inning lead, but Samantha Show and the Cowgirl defense allowed nothing past that lone first-inning run.

Both of the Cowgirls’ runs came when Tulsa was a lone out away from getting out of the inning.

With two outs in the bottom of the fourth, Sydney Springfield drove in Kiley Naomi for what would be the game-winning run. Naomi reached on a double to left to start the inning in what was a good day at the plate. A freshman shortstop, Naomi was 2-for-3 and was the only Cowgirl with multiple hits.

The Cowgirls’ first run came in similar fashion the inning before. In the third, Samantha Show got on base with a single up the middle, and Madi Sue Montgomery brought her in with a two-out double to left field.

2. Gajewski Gets Emotional About Lineup Change

Her credentials are listed in the tweet above, but Sydney Springfield does a lot of her work as a pinch hitter.

She slotted in as the Cowgirls’ designated hitter Saturday, replacing Taylor Lynch, but it wasn’t an easy decision for OSU coach Kenny Gajewski to sit Lynch, a senior. Lynch is in a bit of a slump, not having gotten a hit in her past seven games.

“I had a tough time this week because we’d made some … you know … tough choices in the lineup,” Gajewski said pausing to fight back tears. “We’ve sat Lynch, and it’s tough when you care about kids. I’ve lost sleep. (Springfield) has earned it. She’s big hit after big hit. I’m a loyal guy. Sometimes my loyalty goes a little too far at times I think.

“I’ve been wanting to play Syd more, and I’ve been wanting Taylor to get going. It’s hard to work through all that. I think Taylor, when we were done with this game here, I just told her in front of the whole team, I said I’m proud of her, the way she handled this.”

It certainly worked out with Springfield supplying the game-winning RBI, but it still wasn’t an easy one to make. Gajewski said he wasn’t sure what he was going to do up until he saw warm-ups Saturday.

3. The Most Epic At-Bat to Ever End in a Line Out

Samantha Show and Chenise Delce battled as opposing pitchers Saturday, but Delce also had a ridiculous battle with Show at the plate.

In the first inning, Show had a 12-pitch at-bat in which she fouled off 10 pitches (two of which would’ve been home runs if fair) before Show finally lined out to left field. The count ended 0-2, meaning Show didn’t take a ball the entire at-bat.

“I really don’t have too much going on (in my mind during that long at-bat),” Delce said. “Just pitch a strike that she won’t hit over.”

Rylie Spell got on as the potential tying run to lead off the seventh inning.

Jesse Smith was Tulsa’s next batter. Smith hit a ground ball to Madi Sue Montgomery at second. Spell stopped between first and where Montgomery got the ball, as there was no way Spell was getting passed Montgomery. So Montgomery lunged to Spell, tagged her with her glove and threw out Smith at first.

It seemed like the Cowgirls were only an out away from the Super Regional, but Tulsa coach John Bargfeldt came out to argue the call. After the umpires huddled up, it was ruled that Spell would be on second but Smith was still out.

The reasoning: Montgomery tagged Spell with an empty glove, having already transitioned the ball to here throwing hand. So, instead of there being two outs and the bases empty, there was only one out with the tying runner in scoring position.

That potential game-tying run got to third on a Haley Meinen groundout, but Montgomery was able to put the game away, catching a high pop up for the third out.

“I was just like, ‘Look this ball in and catch it, please,'” Montgomery said. “I thought it was never gonna come down. It felt like it was up there forever.”

The Cowgirls advance to what looks to be Florida State in the Super Regional.

Florida State, the fourth seed, has two shots to beat South Carolina on Sunday to advance. Despite not having played each other this season, the two teams have had a bit of Twitter beef. When Samantha Show’s alpha bat flips caught some headlines, Florida State tweeted this: