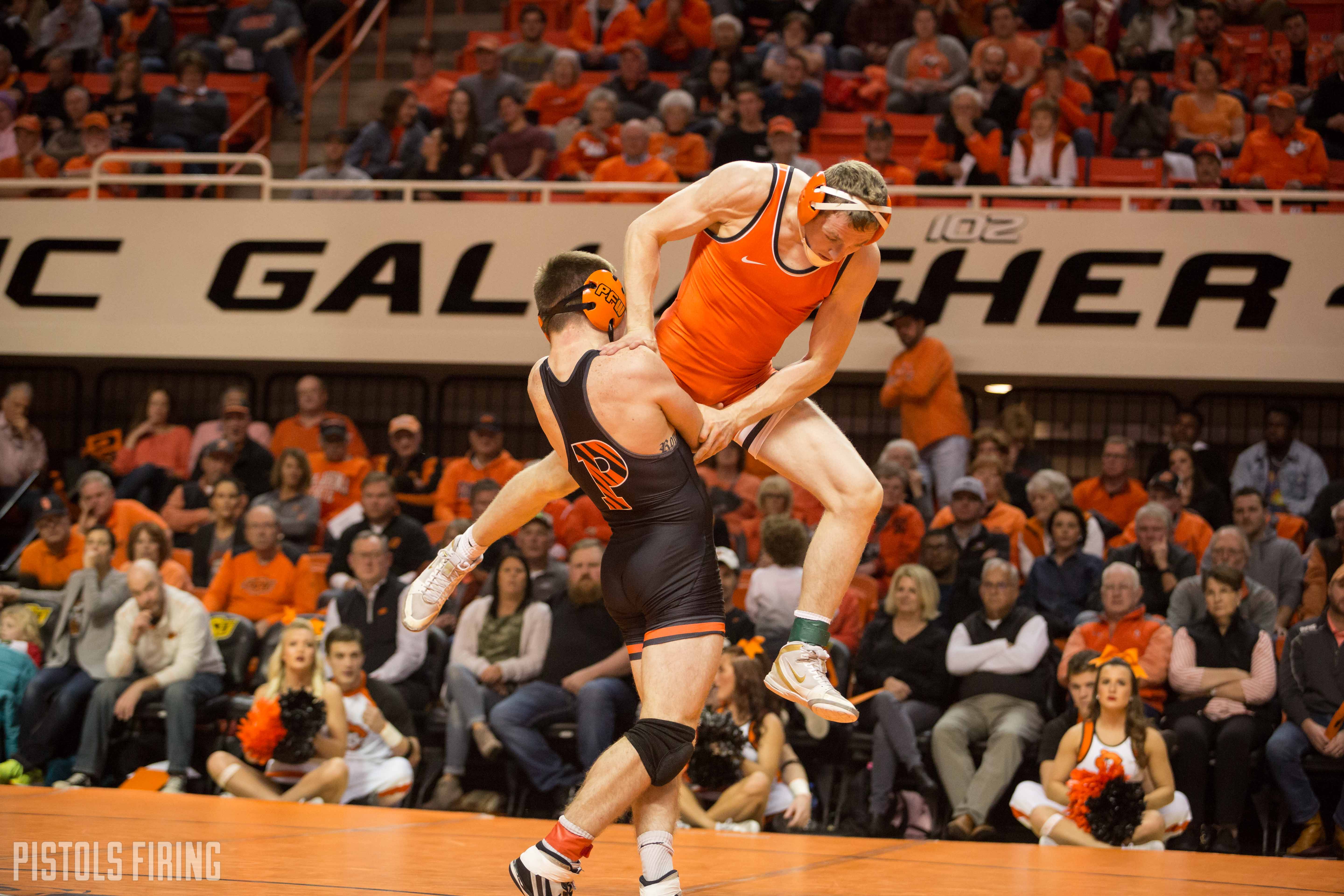 Oklahoma State wrestled Princeton on Friday night in Gallagher-Iba arena and edged out the Tigers 18-15. Here are my thoughts on the outing for the Cowboys

1. How does Nick Piccininni react?

Nick Piccininni has really been the heart and soul of this team for a while. He’s a clear locker room leader and key cog in the lineup this season in more ways than just what he does on the mat. For the first time this season he’s taken a loss after falling 9-4 to Pat Glory, something he never experienced last year until the NCAA tournament. He’ll now have a slightly different outlook on the season than he had last year as he navigates the rest of this year. He’ll still fill all those leadership roles for the Cowboys, but will be doing it with a loss on his resume. How he handles that could mean a lot for how the rest of this season plays out for OSU.

2. Get used to these types of duals

I talked about it a little in the preseason, but every dual this season is going to be a fight. Naturally, you don’t want to, nor expect to, see the Cowboys go in and lose all the biggest matchups in duals like this but it will take these all hands on deck type efforts at times this season. With Daton Fix redshirting, Kaid Brock hurt, and the absence of Joe Smith and Kaden Gfeller to this point in the season, dual wins are going to come at a premium.

3. Other guys stepped up

The premier matchups in this dual were at 125, 157, and 197. The Cowboys fell in all three of those matches creating opportunities for other guys to step up… they did. At 133 Oklahoma State is starting a true freshman in Reece Witcraft who picked up a comfortable decision over Sean Pierson. Dusty Hone, who’s contending for the starting job at 141, got a nice win over Marshall Keller and at HWT Austin Harris picked up a 5-2 decision over Aidan Conner. If OSU would have lost any one of those matches the dual would have went to Princeton on criteria.

In the first few duals it looked like the move to bump Dakota Geer to 197 and insert Anthony Montalvo at 184 was working out pretty well for OSU. Both were having a lot of success and as Montalvo climbed into the rankings at 184, and Geer seemed to be solidified as a top 8 guy at 197. It looked as though that combination would probably produce the most for the Cowboys this season. With Montalvo taking a few losses at 184 and Geer getting beat on Friday night, it’s possible that the staff may be considering a switch back. At this point it’s likely all still being evaluated and no final decision will be made for some time, but when they both lose, one has to think the possibility of Geer moving back down increases.

I’ll have some previews and more in depth stuff on it as we go through the week, but Bedlam, that’s been really an afterthought for most Oklahoma State fans the past few years, suddenly looks more competitive than I think just about anyone expected. OU is good in spots where they’ll be favored and the Cowboys are going to be favored in spots as well. Then there are four to five other weights that could really go either way. The dual is in Norman, so you know their crowd will be fired up (insert sarcastic emoji. There will be more OSU fans there than OU). But it really looks like this could be the first competitive Bedlam dual in a while.