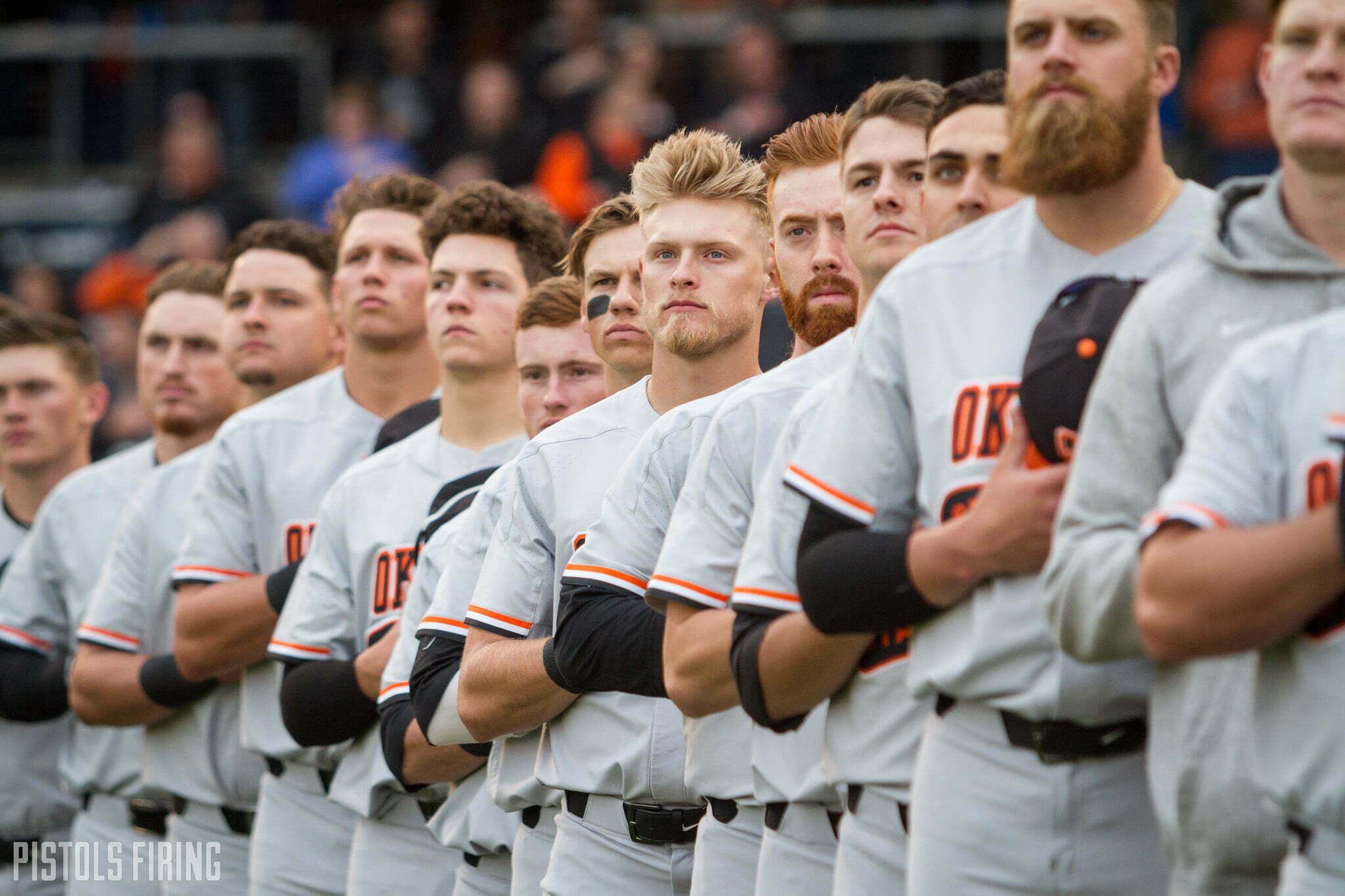 The Cowboys are nine innings from either Omaha or the end of a season.

The Oklahoma State baseball team defeated Texas Tech 6-5 on Saturday in a must-win game. Like Friday’s game, Saturday’s was quite dramatic, ending in a walk-off wild pitch. Sunday, the Cowboys will look to make it two College World Series trips in four years, while the Red Raiders look to make it back-to-back. Here are five thoughts from a wild Game 2.

In the top of the ninth, Lubbock-native Noah Sifrit came in for Carson McCusker in left field to try defend the Cowboys’ one-run lead.

It was a risky move. If the Cowboys gave up a run, Sifrit would be the first man at the plate in the bottom of the inning, and McCusker entered the game with a team-best .312 batting average.

The Red Raiders were able to tie the game off a sac fly Sifrit caught. The Cowboys fought through the rest of the inning, stranding two runners on base, and now Sifrit was at the plate.

He hasn’t had multiple at-bats in a game since April 19, and he hasn’t gotten a hit since April 18. It turns out, the bottom of the ninth’s leadoff man didn’t need a hit. He fought up to a full count before drawing a walk, the first walk he has taken (also since April 18).

From there, it was a series of breath-holding slides. First, Sifrit watched 10th-round MLB draft pick Taylor Floyd throw a wild pitch, and Sifrit narrowly beat the throw to second with a head-first slide. Floyd struggled to find the zone, as he walked Alix Garcia on four pitches, the last one being wild, and Sifrit advanced to third.

After also issuing Hueston Morrill a four-pitch walk, Floyd threw a ball behind Christian Funk to the backstop. As Tech catcher Braxton Fulford scrambled to get the ball, Sifrit came diving at the dish to become the hometown hero for the away team.

Sifrit, a sophomore, has been quite the utility depth piece this season for Josh Holliday. He started eight games in the middle part of the year, all in left for an injured McCusker. He has also made five appearances on the mound this season, where he has a 3.60 ERA.

2. Have a Day, True Freshman

Hueston Morrill is the future of OSU baseball, and Saturday, he was the present.

Morrill, OSU’s freshman second baseman, was 3-for-3 Saturday with a home run, three runs scored, two RBIs and two walks drawn. He also recorded two put-outs and a team-high four assists in the field. It was essentially a perfect game for a teenager playing in his first Super Regional series.

In OSU’s power-hitting lineup, Morrill is probably the only guy who isn’t looked at as a consistent home-run threat. But in the fifth inning, he got a hold a pitch for the second round-tripper of his young career.

He is the only underclassman in OSU’s starting lineup, and will likely be an even bigger piece of this team next year after a good chunk of the team leaves.

He looked destined to be the game’s hero in the bottom of the ninth, as he stepped to the plate with a two on and one out. Instead he watched four pitches go by and took his base, but tell me his coach didn’t have a ton of confidence in his freshman’s upcoming at-bat.

Colin Simpson has started the Cowboys’ past seven games crouched behind home plate wearing a mask and catcher’s gear. In that time, he was 4-for-30 with 18 strikeouts, having multiple strikeouts in all of those games.

Saturday, Simpson returned to the DH role, and the Tank OSU fans swoon over returned.

Simpson finished the day 2-for-4 with three RBIs (his other came in the first). He also struck out only once.

His long stint behind the plate came out of necessity. Bryce Carter took a foul tip to the mask (for the second time this season) in OSU’s game against TCU on May 25. Holliday and Co. didn’t want to rush Carter back out there, as he dealt with concussion-like symptoms after the first foul tip. Carter has rocked a mouth piece recently, and he returned under the catcher’s mask Saturday.

This team seems at its best when Simpson is playing at his. If he can return to that form again Sunday, the Pokes might just be Omaha-bound.

I’m coming to terms with being (at most) the second-most athletic, left-handed male with the last name of Scott in Stillwater.

Parker Scott’s outing Saturday had its rough patches, but he held the ship that is OSU’s season together.

Scott went head-to-head against his former Flower Mound High School teammate Caleb Kilian. Both threw six innings, but at the end of those six, Scott’s Cowboys had a 3-2 lead.

Scott went through the first two innings facing the minimum amount of batters. In the third, he hit his rough patch. Scott issued Dru Baker a one-out walk before Fulford hit a single and moved Baker to third. Baker scored on the next play, a fielder’s choice where Carter’s tag was narrowly not in time.

With runners on first and second, Scott struck a batter out before walking the next. That left the bases loaded for eighth overall draft pick Josh Jung, and OSU’s sophomore got the better of him.

It was relatively smooth sailing for Scott from there. He gave up his other run in the sixth, but that was the only base runner he allowed in the inning.

In that tough third, OSU pitching coach Rob Walton had Sunday starter Brett Standlee warming up, so Scott’s ability to stabilize might also come in handy in Sunday’s rubber match.

Speaking of, Sunday’s game should be a fun one.

The pitching matchup looks like Standlee vs. Bryce Bonnin. The two met in the teams’ April 28 game. Although Standlee was able to hold Tech to its fewest amount runs in the series, Bonnin’s team still won.

How Walton uses his bullpen will be interesting. Best-case scenario for the Cowboys is Standlee goes deep into his outing. The staff’s most dominant bullpen arms have thrown the past two days, but Peyton Battenfield and Ben Leeper haven’t thrown a lot of pitches. Battenfield has thrown 41 in the last two days, while Leeper has thrown only 22.

The Cowboys are now 1-4 against the Red Raiders this season, but all they need to be is 2-4 to advance to Omaha.