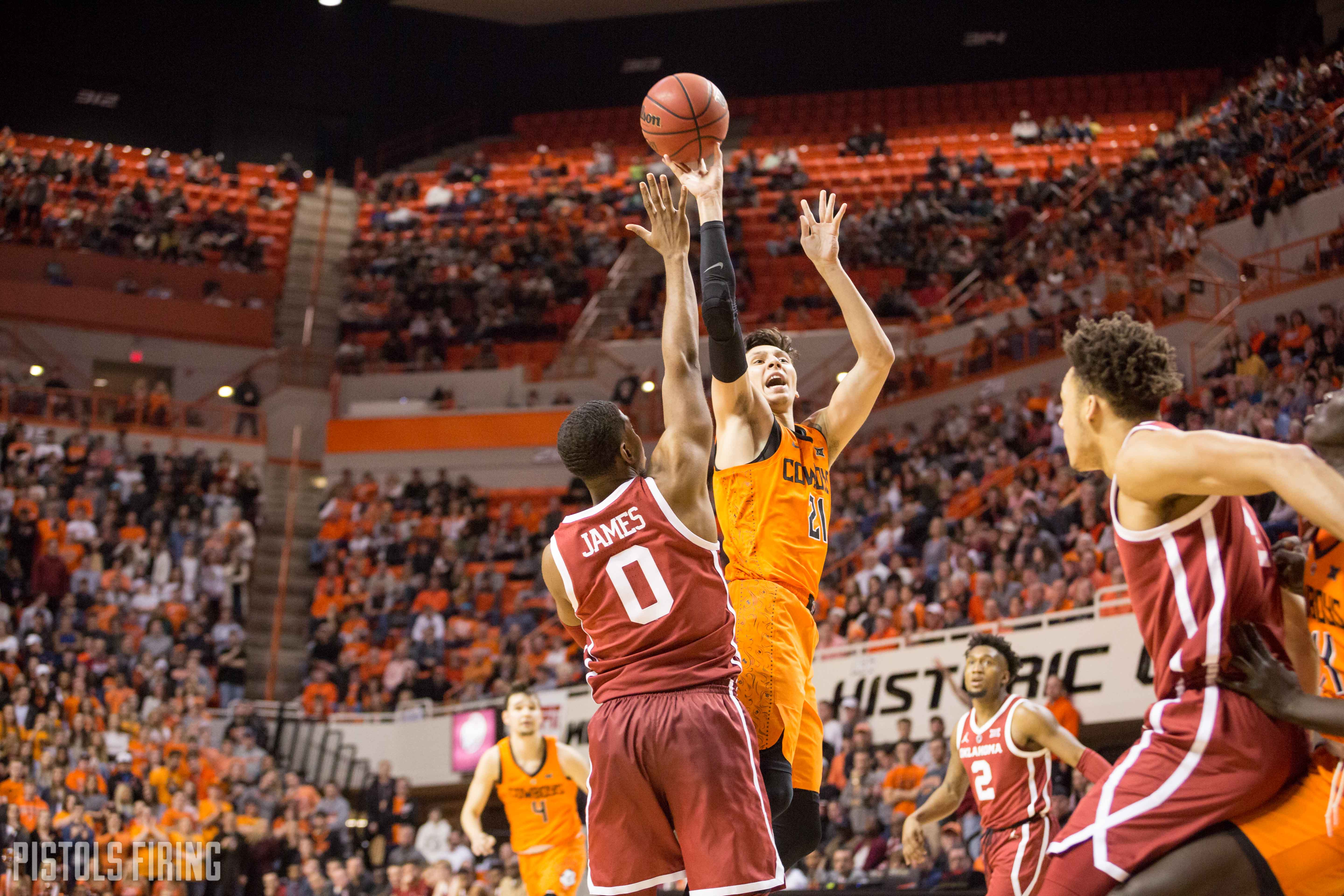 The Cowboys led for about 32 minutes, but all that matters is who leads at the end.

Oklahoma State fell to Bedlam rival Oklahoma 70-61 on Wednesday night in Gallagher-Iba Arena. It was the Sooners’ first win in Stillwater in their past three attempts. The Cowboys were en fuego from the tip, but their hot shooting slowly got extinguished throughout the contest.

The one overarching big thought of the night revolves around OSU having only nine players on its roster, and Mike Boynton only used seven Wednesday night. So, I broke that one thought up into a few, and here they are.

1. Running Out of Gas

With 11:15 left in the first half, OSU led by 19. That seems like a monumental collapse (and it probably still is), but when six guys combine for 191 of your allotted 200 minutes, collapses will happen.

In the last nine minutes, the Cowboys scored only four points, and they were 0-for-8 in the final five minutes.

“I felt like their guys were playing really hard, so they wore themselves down,” OU center Jamuni McNeace said. “We were throwing our defense on them and they were short-numbered, so they got tired later on.”

The sad part is, is there isn’t too much OSU coach Mike Boynton can do about it. Maybe run walk-on Luke Major for a handful of minutes in the first half to rest some legs, but that’s a risk, and how much difference would a few minutes of rest make?

After the latest dismissals, OSU basketball is in a crummy spot for the time being, but the decision was one Boynton deemed necessary for his vision of what OSU basketball will become.

2. Cowboys Unable to be as Aggressive on Defense

In about a four minute span, OU big man Jamuni McNeace scored seven of his 13 points.

That stretch came when Yor Anei had two fouls and was forced to stand near the restricted area with his hands as high as possible and hope McNeace missed. The 6-foot-10 McNeace was an efficient 5-for-6, and the Sooners scored 38 points in the paint to OSU’s 16.

It’s another unfortunate situation because Boynton can’t afford Anei to not be out there for too long a stretch, as at plus-3, Anei was the only Cowboy positive in plus-minus. But, Anei also (and the rest of the Cowboys) can’t be as aggressive as they’d probably like because they can’t afford any ticky-tacky fouls.

Lindy Waters picked up his fourth foul diving for a loose ball about 90 feet from the OU basket. Waters landed on an OU players leg, and it was a foul, despite the GIA crowd’s uproar. Any time a starter gets his fourth foul and has to head to the bench it’s less than ideal, but when it happens to a team who’s rotating six guys in, its magnitude increases.

It’s a shame Lindy Waters career night against his hometown team ended the way it did.

Waters punched the Sooners square in the nose at the start of Wednesday’s game. With 11:15 left in the first half, it was Waters 14, OU 9. He capped off that run with one of the nastiest isolation buckets Eddie Sutton Court has seen.

Waters finished the first half with 14 points on 5-for-7 shooting to go with three rebounds, three assists and a steal.

Lon Kruger’s halftime adjustments made for a difficult second half for the Norman native. Waters scored six more points (giving him a career-high 20), but he did so on 2-for-6 shooting, and he had four fouls and four turnovers in the second half.

On Monday, Boynton said Waters needed to be more aggressive than the eight shots he was getting up a game. He did that Wednesday night, getting up 13 field-goal attempts and putting up his career-high point total. But, the Cowboys still came up short, and Waters ended the night on the bench after fouling out.

4. Another Tough Bedlam for Isaac Likekele

Isaac Likekele was a rough 1-for-6 on Wednesday night after entering the game shooting 50 percent from the field.

Likekele’s driving layups just weren’t falling as they normally do. His only basket came off an uncharacteristic 3-point attempt. Likekele struggled in the first Bedlam matchup this season, where he played only six minutes after picking up a pair of early fouls.

On Wednesday, the Sooners were also able to take advantage of the 13 minutes Likekele was off the floor. Likekele is the Cowboys only true point guard now that Mike Cunningham and Michael Weathers have departed from the program. When he was on the bench, Lindy Waters was given most of the ballhandling duties, something he is capable of doing, but the Sooners made Waters work his way up the floor, giving OSU a shorter shot clock when the Pokes finally got into their offense.

Likekele, only a freshman, has showed his potential at times this season, like in his 23-point domination in Morgantown, but there are also games like the Cowboys past three, where he can seem a bit lost in the shuffle. These first two Bedlam games certainly won’t define his OSU career, but he is off to a slow start in the rivalry.

There were 11,086 people in attendance in Gallagher-Iba Arena on Wednesday night.

For a while, it looked as if that group of OSU faithful was going to get quite the treat when the Cowboys jumped out to a 28-9 lead. It’s unfortunate for Boynton and the Cowboys that they were unable to hold on and send the season-high crowd home happy, just as the case for the Baylor game last week. One would hope those in attendance can see the potential and want to be along for the come-up.

Unless OSU rips off and unexpected streak, it probably won’t be until March 2, when Kansas comes to Stillwater, for the arena to be that full again, but it sure is a lot more fun when the crowd is there.