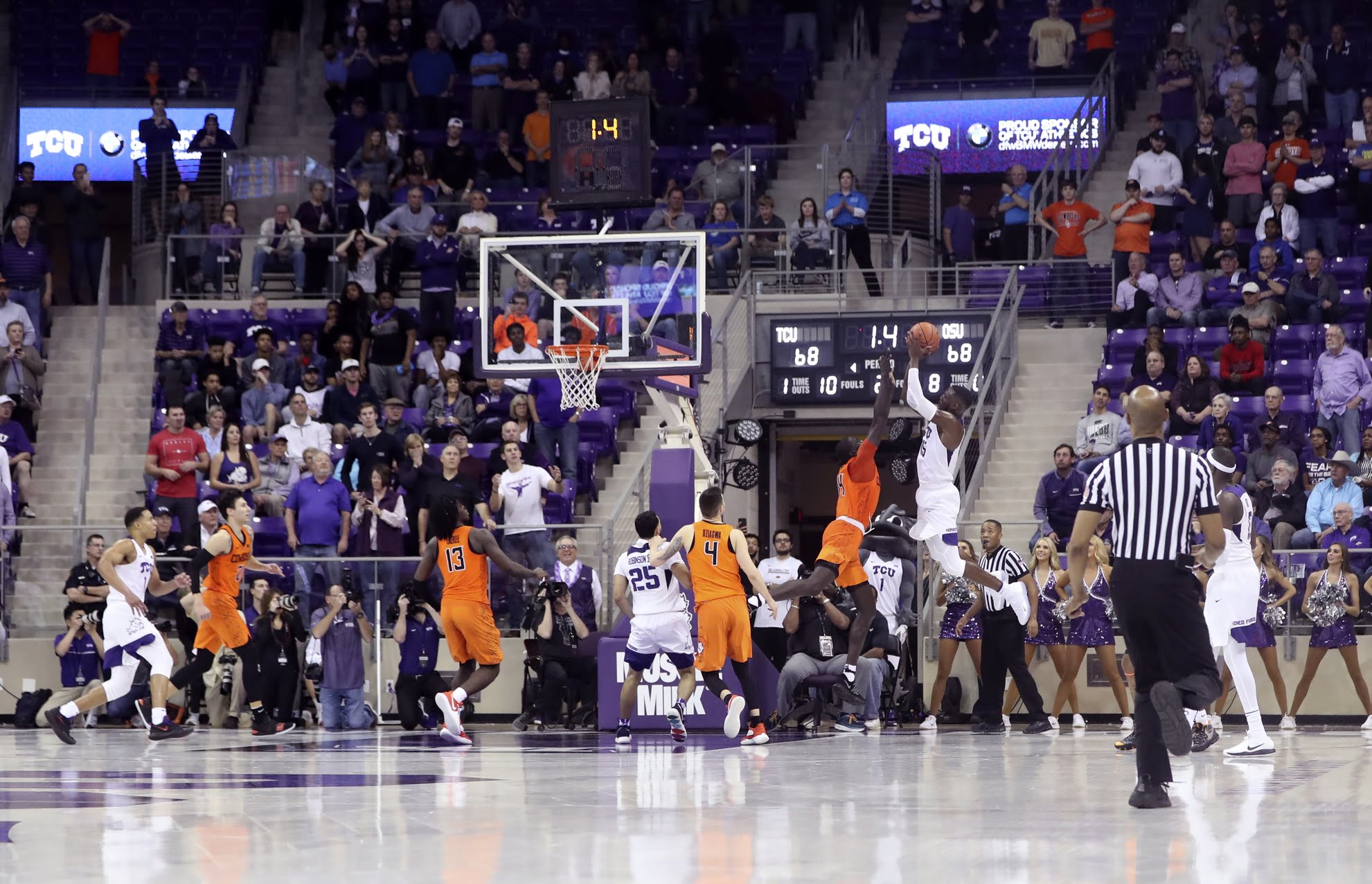 If you want to make a “life isn’t fair” Hallmark movie script, look no further than this game.

Oklahoma State fell 70-68 to TCU in Fort Worth on Wednesday night after the Cowboys came back from a 13-point deficit with only six players. The Cowboys tied it with five seconds left just to get gutted at the buzzer.

At one point this one looked ugly, but the Cowboys showed some toughness and the potential this team has moving forward. Here are five thoughts from a wild night in Fort Worth.

As they’ve done a good chunk of the games since the roster trim, the Cowboys used a lot of zone in the first half.

Where did it get them? Down 39-28 at the half after TCU drilled 9-of-18 3-pointers. The Cowboys used a lot more 2-3 zone instead of the 1-3-1 that has brought them success, but it wouldn’t have made much a difference considering Desmond Bane went into the break with 15 points on 5-of-6 3-point shooting.

The Pokes played their patented heavy denial man-to-man for a good chunk of the second half, where the Horned Frogs shot only 16.7 percent from deep.

Is playing that aggressively on defense sustainable with only six guys playing nearly all of the minutes? We’ll have to wait and see. If the game did go to overtime, the Pokes might have had to get stuck with IVs before heading to the locker room.

2. Boynton was Drawing Up Some Beauties

Another portion of the Cowboys comeback came from nice sets on the offensive end.

Boynton and the Cowboys have been criticized in the past for looking too stagnant on offense. It could be the fact that these six guys have played so much together at this point that they’re comfortable with each other or it could be some new sets, but whatever it is, it looked nice.

Look at Likekele point to the corner Waters is in before he sets the back screen on McGriff’s man. He didn’t even need to look over his shoulder to know Waters was going to be there.

On the Cowboys next possession, Boynton was able to take advantage of TCU big man Kevin Samuel’s inability to help off a screen to cover Dziagwa. Dziagwa would’ve been open had he ran off Anei’s or McGriff’s screen.

Yor Anei dropped a team-high 20 points (his first career 20 piece) on a casual 7-for-7 shooting.

Entering the game Anei was a less-than-ideal 26-of-47 (55.3 percent) from the free-throw line, but in Fort Worth, he went 6-for-7. With how long his arms are, his post shots looked a little funky coming out, but you can’t argue with 100 percent.

It might be hard to see for some with the Cowboys being 9-13 and having dropped five of there past six, but any freshman who can do this is going to be a problem:

He stuffed the stat sheet on his way to 17 points, seven assists, three rebounds and four steals. It was a tough night for the Cowboys usual sources of baskets, Lindy Waters and Cam McGriff. The two juniors combined for 15 points on 31-percent shooting, whereas freshmen Anei and Likekele combined for 37 points off 70-percent shooting.

On this play, Likekele gets isolated with Desmond Bane. Likekele cracks Brane’s ankles before a nice dish to his classmate for an easy bucket.

There were a few times down the stretch where Likekele’s inexperience showed. He tried a step-back midrange shot late that was an airball. Likekele’s jumpshot is definitely something that will need to continue to develop in his time in Stillwater. There was also this on a crucial possession in the final two minutes:

5. Mike Boynton and Six Guys Go to Fort Worth

It’s a thing I’m sure even the players are getting tired of hearing about, but it’s incredibly hard to win a Big 12 game playing this many minutes. The Pokes have no choice.

Mike Boynton on playing only six players in the second half: "It is what it is. Not here to make excuses. If it’s six, if it’s five, the job is to go out there and out-execute the other team." #okstate

Nights like Wednesday night are going to make a huge difference in 2020. The Cowboys growth is something seen from a game-to-game basis. Saturday against K-State, the Cowboys were in a similar situation in the first half with K-State hitting a bunch of shots. But, K-State was able to snowball its lead and pull away, whereas the Cowboys stabilized against TCU.

He’s got one of the Dirtiest Pull-Ups in High School…sheesh ?
pic.twitter.com/pQZTz5ubvr

It’s not going to make this loss or any of the others the Cowboys catch in the next nine games look any better, but it’s clear things are slowly trending up.