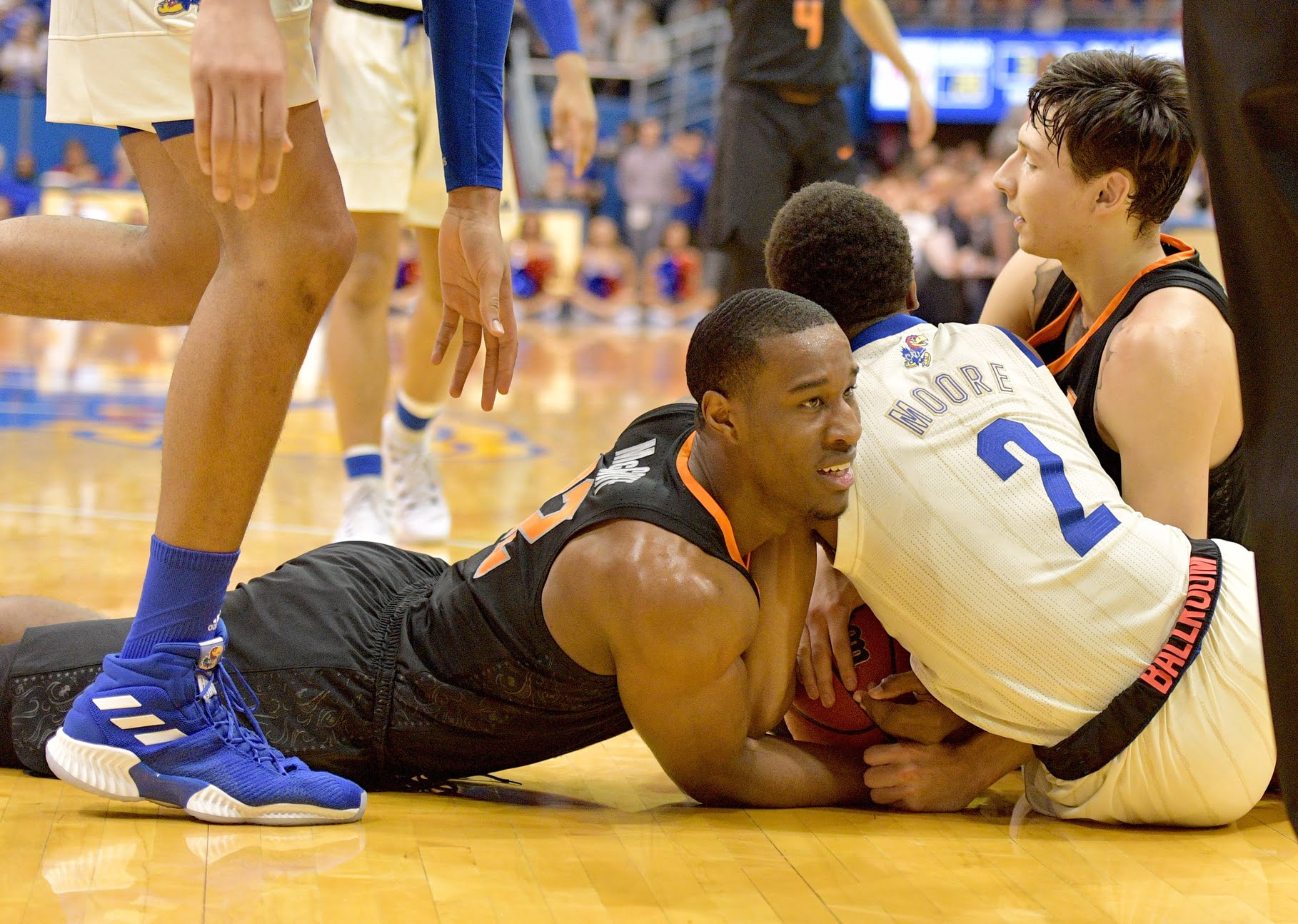 LAWRENCE, Kan. — At the half, it looked as if the Cowboys were going to go back to back in Allen Fieldhouse, but after that, the Pokes got lost in the Phog.

Oklahoma State fell to Kansas 84-72 on Saturday in Lawrence after the teams went into the break tied at 36. Kansas’ Dedric Lawson and Ochai Agbaji combined for 48 points on 67 percent field-goal shooting.

It was another solid outing for Cam McGriff in Lawrence as his 22 points were the most he has scored in a game since setting a career-high against LSU on Nov. 25, but the performance wasn’t enough as McGriff fouled out with 4:02 left. The Jayhawks finished the game have made 50 percent of their field-goal attempts, the third time a team has made at least half of their attempts against OSU this season.

Here are five thoughts from the loss that moved the Cowboys to 9-14 on the year.

With 12:32 left, McGriff threw down a dunk that pulled the Cowboys within a bucket. But from there, the Jayhawks went on a 12-0 run with four straight 3-pointers, two from Quentin Grimes and two from Agbaji.

The dozen to nothing run ended up being the difference in the game, but it didn’t seem as if there was too much the Cowboys could do about it, as the final three triples came on back-to-back-to-back possessions. You’d think at some point, someone would miss, but that run saw Kansas’ 2-point lead balloon into a 14-point drumming.

The Cowboys weren’t ever able to recover after that, as Kansas got their lead as high as 19 with five minutes to go.

“They just came out and was hitting shots,” OSU freshman Isaac Likekele said. “People hit shots, tough shots. Once they got it going, it just happened so fast, you know. We tried to stay a little poised at the time, but you know, they did what they did and they made shots.”

Teams are hitting 3s at a high percentage against OSU as of late.

In the Cowboys two conference wins this season, Texas shot 9 percent from deep, and West Virginia made only 21 percent of its 3s. Since, no team has shot below 33 percent, with Baylor (60 percent), Iowa State (40 percent) and Kansas State (55 percent) all shooting at or above 40 percent.

Kansas went 11-for-29 from 3-point range Saturday, marking the third straight game the Cowboys gave up at least 10 3-pointers. In OSU’s first 16 games of the year, the Pokes gave up 10 or more 3s only three times.

A lot of this has to do with the Cowboys having to use more zone to counteract their thin roster. Teams have been able to make skip passes or play inside-out to get good to open looks as of late.

“Obviously they made several 3s in a row,” OSU coach Mike Boynton said. “I don’t know exactly where the breakdowns were. Obviously we were playing a little bit of zone, it’s kind of become a thing that teams who haven’t shot the ball well come into our game and all of a sudden find their magic touch and the ball just goes in the basket more. But again, they’ve got really good players.”

Lindy Waters played only 30 minutes Saturday, the fewest amount since he got into foul trouble in Norman on Jan. 5.

Waters’ left knee was in a soft brace in practice on Friday, and after Saturday’s game, Boynton said he is dealing with some tendinitis. Boynton said it isn’t anything major, but it’s rather a product of how much he has had to play this season.

Waters subbed out with 4:36 remaining and the game already firmly in Kansas’ grasps.

“He didn’t practice very much yesterday,” Boynton said. “Add it to the list, man. I don’t worry about it. Whoever’s available will play. Is what it is. We’ll try to do, as a staff, everything we can to protect themselves from hurting themselves further and then whoever’s available, we’ll try to put ourselves in position to try to win.”

4. Getting Over the Hump

There haven’t been many games this season where OSU has come out and just gotten throttled from start to finish.

The Cowboys were tied at halftime against Kansas in Lawrence, and they lost to a buzzer-beater Wednesday night.

The Feb. 2 loss to top of the league Kansas State, the Jan. 19 loss against Iowa State after the Cowboys roster was cut down to seven realistic contributors and the Nov. 23 loss to defending national champion Villanova might be the only games the Cowboys were out of all season.

“We’re getting better,” Boynton said. “I’m sure for some of you guys who have not seen us very often this year, look at our record and think maybe man, that team shouldn’t be in the Big 12 this year. But we are improving and I’m proud of that. We’ll continue to work. Whatever the thing is that people have that make them quit, I don’t possess it. So what we’ll do is we’ll keep working. We’ll keep fighting and keep trying to compete. Eventually we’ll have a breakthrough and our guys won’t look back.”

Despite all the close games that haven’t resulted in a conference win since Jan. 12, Boynton said he doesn’t believe in players’ heads getting down because his guys are competitors.

“If their heads are down and they don’t feel like they can play, I would advise them not to show up to practice,” Boynton said. “In our program, when you show up, you’re going to do your job at a high level every single day. You’re going to compete to try to win because it’s not about you. It’s not about how you feel. It’s not about how I feel. We don’t represent just ourselves. We represent a lot of people out there who expect to see a certain level of effort, and eventually, they expect us to win some games too. But for right now, the effort must continue to be there.”

5. Allen Fieldhouse Is Worth the Trip

With a minute left and the game already in hand, the home fans stood to their feet and ominously sang Rock Chalk Jay Hawk.

Some of the 16,300 in attendance had already headed for the exit, but for the most part the area was still full at the end of what turned into a blowout against the ninth-place team in the Big 12.

It was my second time in Allen Fieldhouse, as I was there last season when the Cowboys upset the Jayhawks, but the building still felt as if it was some church for basketball. The arena is mostly wood and looks its age (it opened in 1955), but it rather than looking like a relic, it feels like you’re stepping into the history instead of looking at it after the fact.