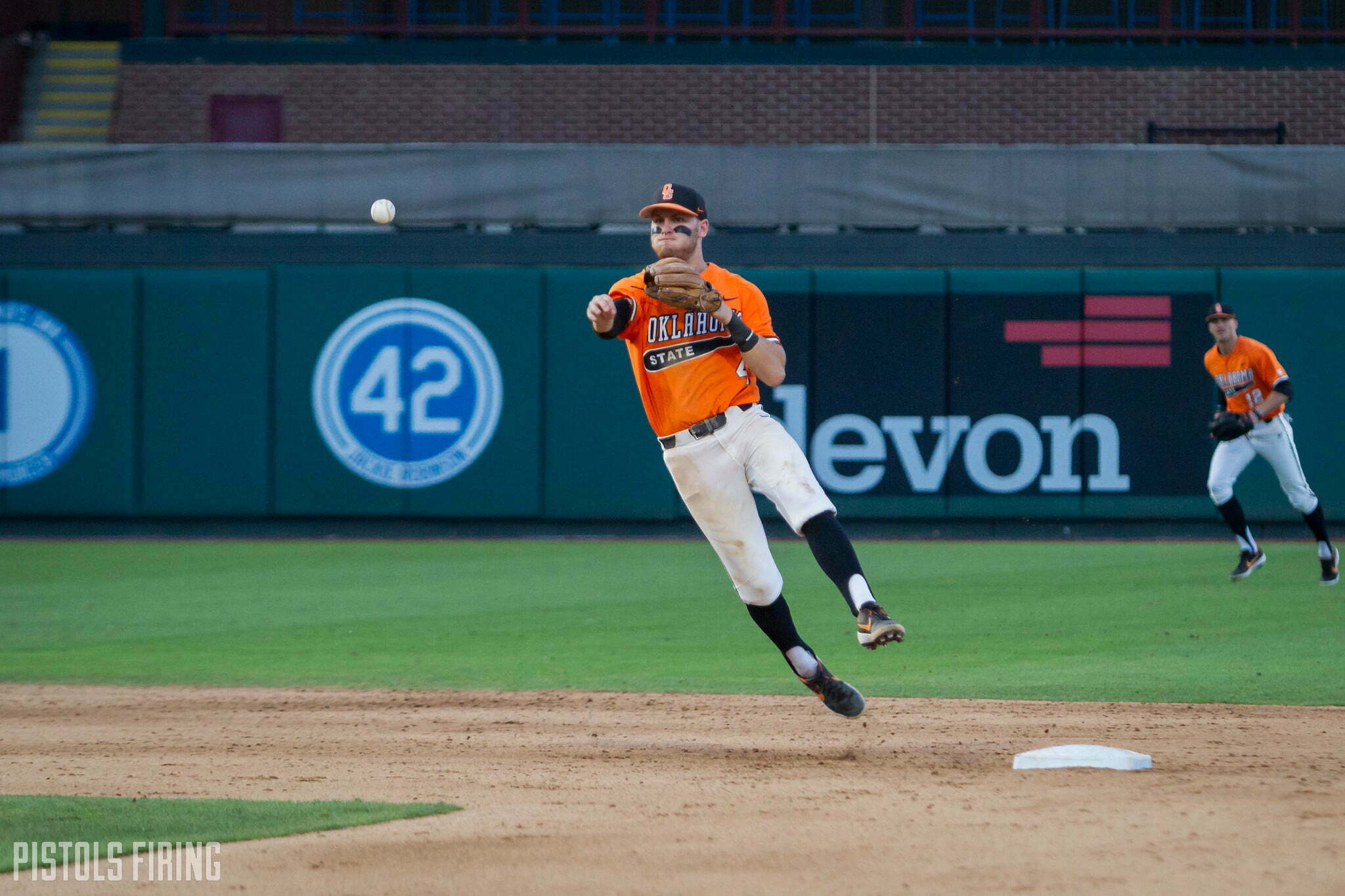 One of the more fun Oklahoma State baseball seasons to follow in recent memory came to an end Sunday.

The Cowboys fell to Texas Tech in a series-deciding Game 3 Lubbock 8-6, advancing the Red Raiders to the College World Series and ending the Allie P. Reynolds Stadium era of OSU baseball. I usually go in depth in the game on these, but I’ll take a broader look at things in this season-ending Five Thoughts.

1. What a Freaking Series

Big 12 baseball is alive and well.

The conference might get only one team to Omaha this season, but what a dog fight it was to get that team there. A lot of people don’t like when teams from the same conference meet in the Super Regionals, but man, it felt like that game meant a lot more to the teams involved.

After OSU got demolished in the regular season series, I wasn’t high on the Pokes’ chances this weekend, but they were just a play or two away from being the conference’s top dog.

Sunday went just as the first two games of the series did: One team seeming like it had a breakthrough just for the other to not let its foe get too far away.

I haven’t caught too much of the other Super Regional games around the country, but I can’t imagine there was a series nearly as good as this one.

If you would’ve told me Sunday’s game would have seven home runs, I probably would’ve backed the Cowboys in that slugfest, but as OSU coach Josh Holliday has been known to say, that’s baseball.

The last three half-innings were quite the roller coaster. OSU took a late lead in the top of the eighth with a Colin Simpson home run and a Bryce Carter sac fly, but as there was all series, there was an answer.

In the bottom of the inning, Josh Jung crushed his second home run of the day before sophomore Kurt Wilson crushed a three-run bomb to take a two-run lead. The homers came off Peyton Battenfield and Ben Leeper, who had been nails as of late at the end of games, but it just wasn’t meant to be Sunday.

The roller coaster looked to have another hump in the top of the ninth, though, as Alix Garcia and Cade Cabbiness walked to start the inning, but with two on and no outs, the Cowboys couldn’t get it in the field of play. Hueston Morrill was the 13th OSU batter to strike out. Then Christian Funk fouled out, and Simpson was strikeout No. 14, ending an outstanding OSU season.

If this is the end of the Simpson/Boone era of OSU baseball, the era’s final game was fitting.

The Colorado Rockies drafted Colin Simpson and Trevor Boone last week. Sunday was definitely Simpson’s last game in an OSU uniform, and the loss leaves Boone with a decision. Playing his senior season at OSU could improve his draft stock from the 18th round he was taken in. Look no further than Simpson in how a senior year can help, as Simpson was undrafted in 2018 and taken in the 29th round this year.

Boone can also lose some negotiating leverage returning for an extra year, as oftentimes drafted seniors get offered less money because they don’t have a college to fall back to. It’s up in the air at this point. I’m not that in tune with the MLB Draft, so I deferred to my friend Nathan Ruiz, who covers the Orioles at the Baltimore Sun. He said he wouldn’t be surprised either way if Boone stayed or left.

The 21st #BooneBomb of the season started Sunday’s scoring. Boone took an 0-1 pitch the a tree beyond the left-field wall.

Simpson’s wallop came in the eighth. It was a classic Simpson bomb with his little hop in his follow through, and of course, it went quite a ways.

The bomb was the 48th of Simpson’s career, which ranks ninth in school history, tied with Corey Brown.

This was a fun season to watch, and a lot of that was because of how fun it was to see Simpson and Boone crank balls out of the park.

Next year that number will roll back to 0-0-0 with the new O’Brate Stadium. It was a great run for the ole ballpark. It hosted 12 College World Series teams and 17 Big Eight/Big 12 regular season champions.

The last OSU team to play at Allie P. did the stadium proud, winning a conference tournament title and making it to the Super Regional round. The Cowboys were 19-7 in Stillwater this season. The move is a welcome one, as much of Reynolds Stadium is outdated, but what a ballpark it was while the Cowboys played in it.

5. A Way Too Early Look at Next Year’s Squad

This team might not look too similar next season.

Logan Gragg, Peyton Battenfield, Brady Basso, Trevor Boone, Jensen Elliott, Andrew Navigato and Jake Lyons all have decisions to make after being drafted as juniors, but regardless, the Pokes will still return some quality to 2020.

Freshman second baseman Hueston Morrill is a blossoming star. If the Cowboys would’ve won series, there is an excellent case that Morrill would’ve been the Super Regional’s MVP. In the three games in Lubbock, Morrill had eight hits, three RBIs and four runs scored. At some point in his OSU career, Morrill will likely move to shortstop, but he was just as impactful between first and second this season.

Alix Garcia also broke through at first base this year. A junior, Garcia finished with the third best batting average on the team despite spending much of the year in the eight hole. He also made some ridiculous plays at first base.

Carson McCusker’s 6-foot-8 frame will likely return to the OSU outfield in O’Brate Stadium. McCusker batted seventh this season for the Cowboys but had a team-best .311 batting average.

There will be holes to fill, but there is still plenty to be excited about in O’Brate’s first year.