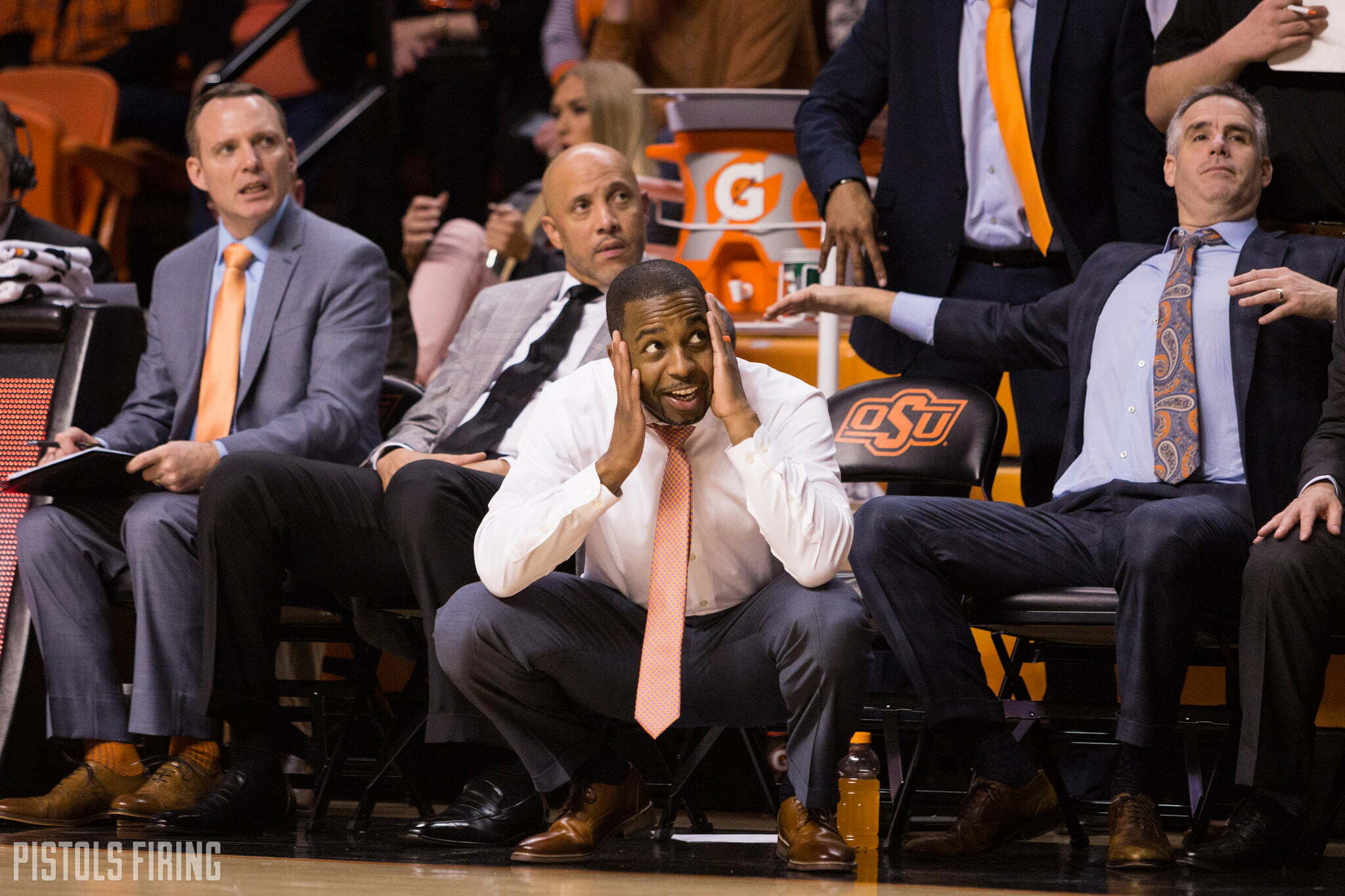 This wasn’t supposed to be one of the tougher nonconference games Oklahoma State played this year.

The Cowboys blew a 24-point lead in a 66-64 loss on the road Charlotte on Saturday. There were times the Cowboys looked much better than their last-place Big 12 preseason ranking, but that quickly came back to earth by the end of the game.

The team is young, and coach Mike Boynton has said all along he hopes the team plays its best basketball in January rather than November, but losing to a team that won only six games last season and had already lost to Chattanooga by double digits this season wasn’t the ideal way to start Year No. 2 of the Boynton era.

Here is what Boynton said postgame:

Here's what @thacoachmike had to say after the game. #okstate #c2e pic.twitter.com/x6W5BtCHxQ

Here are five of my thoughts from a rough Game 1.

The Cowboys hit 78 percent of their 3-pointers in the first half. In the second half, that number plummeted to 21 percent.

Despite leading 37-19 at the half, the Cowboys shot five more 3s in the second half than they did in the first. Of the Cowboys’ 50 field goal attempts, 23 were from long range.

It’s a trend of basketball getting more and more popular, but up as many as 24 points, I would have liked to see OSU work it inside more. The Cowboys were outscored 26-20 in the paint, and Charlotte shot three more free throws.

2. There Shouldn’t Have Been a Flagrant Foul Call to Blow

Up three points with five seconds left, Lindy Waters intentionally fouled a Charlotte player. It’s a common thing to do. Charlotte would shoot two free throws, and OSU would get the ball back to tick off more time.

However, the officiating crew called the foul a flagrant, meaning Charlotte would shoot two free throws and get the ball back. So, Jon Davis went to the line, knocked down two free throws, then hit a go-ahead 3 with .6 seconds left.

It was a terrible call, but OSU shouldn’t have ever been in that position. The Cowboys were up 24 on a mid-major that started three freshmen. Yes, OSU is also young, but I’m much more worried about the blown lead then the game’s final seconds.

3. How Much Did We Really Learn?

In a month, this team is going to look much different than it did Saturday.

Against Charlotte, there was no Mike Cunningham who is dealing with a nagging hamstring injury. There was no Michael Weathers, who was recently reinstated after being suspended since September. And there was no Curtis Jones, who after transferring from Indiana partway through last season has to sit out the rest of the semester.

All three of those guys will compete for starter-level minutes. Needless to say, a lot will look different. Weathers might be the best player on the team, and Cunningham and Jones each bring something the Cowboys are in need of: Experience.

The Cowboys played nine guys against Charlotte, six were freshmen. In a few months even those six guys will be different players than they are now. This loss was not the greatest look for OSU hoops, but it’s all a part of the process.

4. Free Throws are a Positive

In every practice, Mike Boynton will randomly (to me at least) blow his whistle and have someone, or the whole, team go to the free-throw line.

One of the team managers keeps the total on the scoreboard with the goal of shooting 75 percent. If the team doesn’t make it, there is running to be done.

Against Charlotte, the Cowboys were 14-for-18 from the line. That’s about 78 percent.

Cameron McGriff did the most damage from the line, going 8-of-8. In the game’s final 32 seconds alone, McGriff hit six of his free throws. Cool as a cucumber.

As I mentioned before, six of the nine players Boynton put on the court Saturday were freshmen.

Here is a look at their stats.

First thing’s first: That’s not a lot of production. Despite making up 67 percent of the players, the freshmen did only 27 percent of the scoring. But it was their first game, so in the long term, it’s not too big a deal.

An eye-popping number is Likekele’s 30 minutes. That’s due in part because of Cunningham’s and Weather’s absence. Likekele was the only true point guard OSU had Saturday. When he was on the bench Lindy Waters was running the point. Likekele’s first collegiate performance was impressive.

Likekele and Anei started, and I have to say I’m surprised Duncan Demuth tied Anei for the second-most amount of minutes from the freshmen. While his stats don’t necessarily show it, Demuth looked good. He had two blocks and there were many times he was diving to the floor for loose balls.

Freshmen walk-on Luke Major got in the game within the first 10 minutes, something that will likely stop once the team gets more pieces back, but it was cool to see.