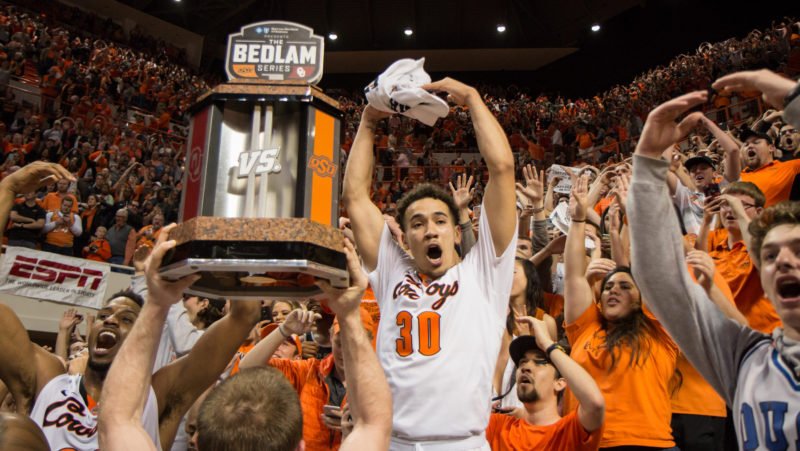 The Cowboys completed their first regular season sweep of Oklahoma since 2004. Yeah, the year they went to the Final Four.

It was all you could want from a college basketball rivalry game. The crowd. The scoring runs. The drama and heroics.

What a fun year.

From the tip, the Cowboys looked like they knew OU was an inferior team and thought they could cruise to a win by chucking 3s and playing lackluster defense. That was all well and good until the Sooners made five of their first seven 3-pointers and outscored OSU in the paint 18-6 in the first half.

“On the first half, the fight was all their’s,” said Underwood. “I didn’t think we fought very hard. I thought they were physical. I thought they came at us and really had us back on our heels.”

Somehow OSU won the turnover battle 12-17. If you’d asked me at the final buzzer, I would have said they lost it by ten. The Cowboys made plays when they had to and got the “W”, but in all honesty, they should have led the game for more than seven minutes.

Do we just chalk this up to being “Bedlam”? Or is there a deeper issue here? Because I believe the defensive effort and execution we saw tonight would get the Cowboys bounced out in the first round faster than Travis Ford at a Stillwater High School game.

2. OSU has a ways to go defensively

At times, the worst team in the conference looked like they could score with the best of them. So many open 3s…

Oklahoma’s 53 first-half points were the most OSU has allowed in a half all season. Add in some silly fouls and you can see why Brad Underwood looked like he was about to burst a blood vessel in the first half.

Underwood and Co. made some second-half adjustments and were able to eliminate some of OU’s easier shots at the basket. Then, when it came to crunch time, they locked up the Sooners.

Dizzy must have been checking his phone and shared the message in the huddle during that timeout. OSU allowed only two points the rest of the way, outscoring OU 7-2.

3. The Rowdy is real

It sounded pretty great from my seat on the couch. At one point early in the second half, Lon Kruger called a timeout and the possession continued for a good five or so seconds because no one on the court could hear the ref losing his mind into his whistle.

“The crowd was great,” said Kruger. “I thought it was a fantastic atmosphere. Again, Brad’s done such a great job in a short time. Crowd was fantastic. Anytime you’ve got a crowd like that, it definitely plays a role.”

OSU’s third sellout this year. Eddie was in the house. QB1 and J.W. were in the house. Davon was going full Ramon with the Bedlam trophy in the student section … Great job, guys.

4. What can you say about Jawun?

Brad Underwood’s post-game comments regarding his point guard say it all.

“What can you say about Jawun? We had the best player on the court.”

Evans didn’t score until the 8:35 mark of the first half (on a goal-tend call) with OU already up nine. He went into the break with five points on 2-7 shooing.

But his second half? Have mercy.

Evans put up 22 points after the break including 16 of the Cowboys’ last 18 points on 9-of-15 from the field. He was tremendous. He’s a baller. A closer. He’s clutch. All of it.

Let’s look at Underwood’s question in a different light. What can we say about Jawun when it comes to all-timers at OSU? Is he No. 1? No. But how different is his tenure looked upon without the injuries and a rough season for the team last year? The good news is that his story in orange isn’t over.

5. The State of Oklahoma State

One month ago, the Cowboys were in Stillwater recuperating from their sixth-straight loss at the hands of Kansas State. Now they’re celebrating their eighth win in nine tries and are looking forward to a rematch in Manhattan against Underwood’s alma mater.

The Cowboys are now 7-7 in Big 12 play with just four games remaining. If they can get it done in Manhattan, they will be one step closer to finishing above .500 in conference play for the first time in four years.

Next up: After K-State they have Tech at home then they go to Iowa State and then finish the season with Kansas in GIA. How fun is this?