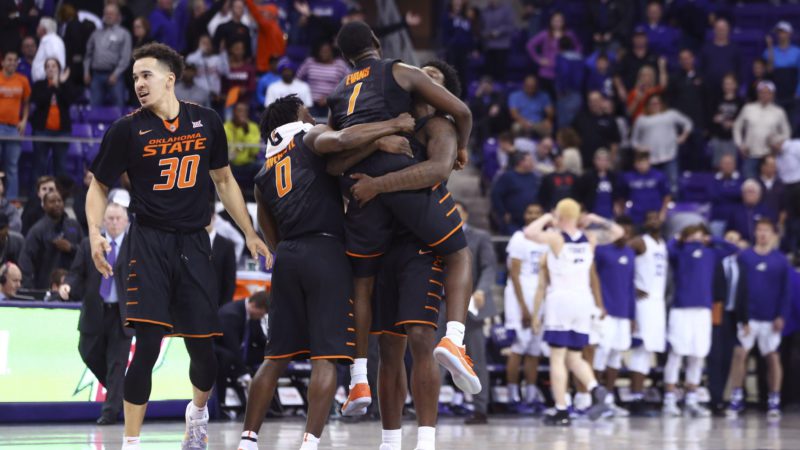 The Cowboys escaped a close one in Fort Worth. It wasn’t always pretty but a win is a win, especially on the road. And especially in Big 12 play in February.

Behind Leyton Hammonds’ 16-point first half and Jawun Evans’ clutch play down the stretch, it escaped with a potential momentum-swinging win to move into fifth place in the Big 12 standings. The outlook for the rest of the Big 12 slate, with three of the next five coming at home, is looking more and more intriguing.

1. This win was critical for OSU.

It’s hard to win in Fort Worth. Or at least it has been this season. Jamie Dixon is another first-year coach in the Big 12 tasked with rebuilding a program and may very well end a 19-year NCAA Tournament drought for his alma mater in his inaugural season. And despite a now 6-7 Big 12 record for the Horned Frogs, TCU has been difficult to beat on its home floor. Especially since February.

The Cowboys are now 4-3 on the road in conference play, including four-straight in games not at Gallagher Iba-Arena. For you math guru’s out there, four is greater than three, the number of total Big 12 wins a year ago.

Let that sink in for a minute.

The last two games for Hammonds may have been a delight for fans, and they’ve been nothing short of a Godsend for Brad Underwood. The senior leader who has served mostly in defensive and rebounding roles this year followed up what I called his best game of the season against Texas with a performance that makes that narrative a moot point.

In a stretch of less than 30 seconds in the first half, Hammonds grabbed a big offensive rebound, turned it over with a high pass across back court, then got a great defensive rebound — which he sandwiched with back-to-back 3-pointers. His broadcast mentions-per-100 possessions were at a career high tonight, according to unofficial KenPom data.

Oh yeah, in that Texas game he put up 11 points on 4-4 (3-3 from 3) and grabbed four rebounds. Not a bad outing. But as has been the custom, he fouled out in 16 minutes. It’s something he’s done a lot of this year (seven times). Coming into Wednesday, Hammonds’ 93 personal fouls were second-most in the conference.

Tonight? How about scoring his first 11 points (4-6, 3-5) — the only Cowboy to score in that stretch — with only one personal foul (his only in the game). His night ended with a season-high 21 points on 13 shots, including making five of his career-high eight 3-point attempts. He also had seven rebounds.

Hammonds has more points in the first 17 minutes tonight than he's had in 104 of the first 112 games of his career.

If Hammonds can continue to contribute anything offensively, it bodes well for the Cowboys as they finish up this regular season stretch run. His resurgence from the 3-point line puts that much more pressure on opposing defenses — who were already under a ton of pressure trying to deal with the No. 2 offense in the country.

All credit to Hammonds for the uptick in performance, but this appears to be just one more example of Underwood’s coaching acumen. Guys are actually improving. What a concept.

I approve of this message.

Won't win coach of the year, but there has to be some kind of award for Brad Underwood with what he's doing right now at #OKState

3. Why aren’t the Cowboys getting to the stripe?

Against Texas on Saturday, OSU attempted a season-low eight free throws. That’s another moot point, as it turns out. In a close game that went down to the wire, OSU went 5-for-5 from the line. That was the whole team — not just Jawun Evans. Carroll made his three and Averette made two big ones late.

I think the Cowboys need to be more aggressive. They came out on top in both of these games but when you’re the 15th-ranked free-throw shooting team in the nation, you wouldn’t mind getting a little more reps at it. That’s an advantage. Let’s use that. I want Evans taking five per game himself if I’m Brad Underwood.

He didn’t have his best shooting performance early, starting out 4-for-10. But Evans was the best player on the floor tonight, which is what OSU needs from him. He ended the night scoring 10 of the Cowboys’ last 14 points including this dagger.

Evans clocked out in Fort Worth with 16 points on 17 shots and a career-high (!) 12 assists. Most importantly, he lifted up his team and shoved them in the direction of their seventh win in eight tries.

I am so ready to be finally introduced to March Madness Jawun. Thank you, Coach Underwood.

Here it is, folks. This is it. That cloud that was hovering over corner of Hall of Fame and Knoblock has dissipated. It really did several months ago with Underwood’s hiring. But what started as preseason optimism and the new coach smell have given way to actual substance. We have seen tangible change and improvement. And this is just the beginning.

I’ll leave you with this.

Take a look inside the Cowboy locker room after the win ? ‼️ #okstate pic.twitter.com/1CArxeC0co

Next up for OSU: Bedlam basketball on Saturday at Gallagher-Iba Arena.