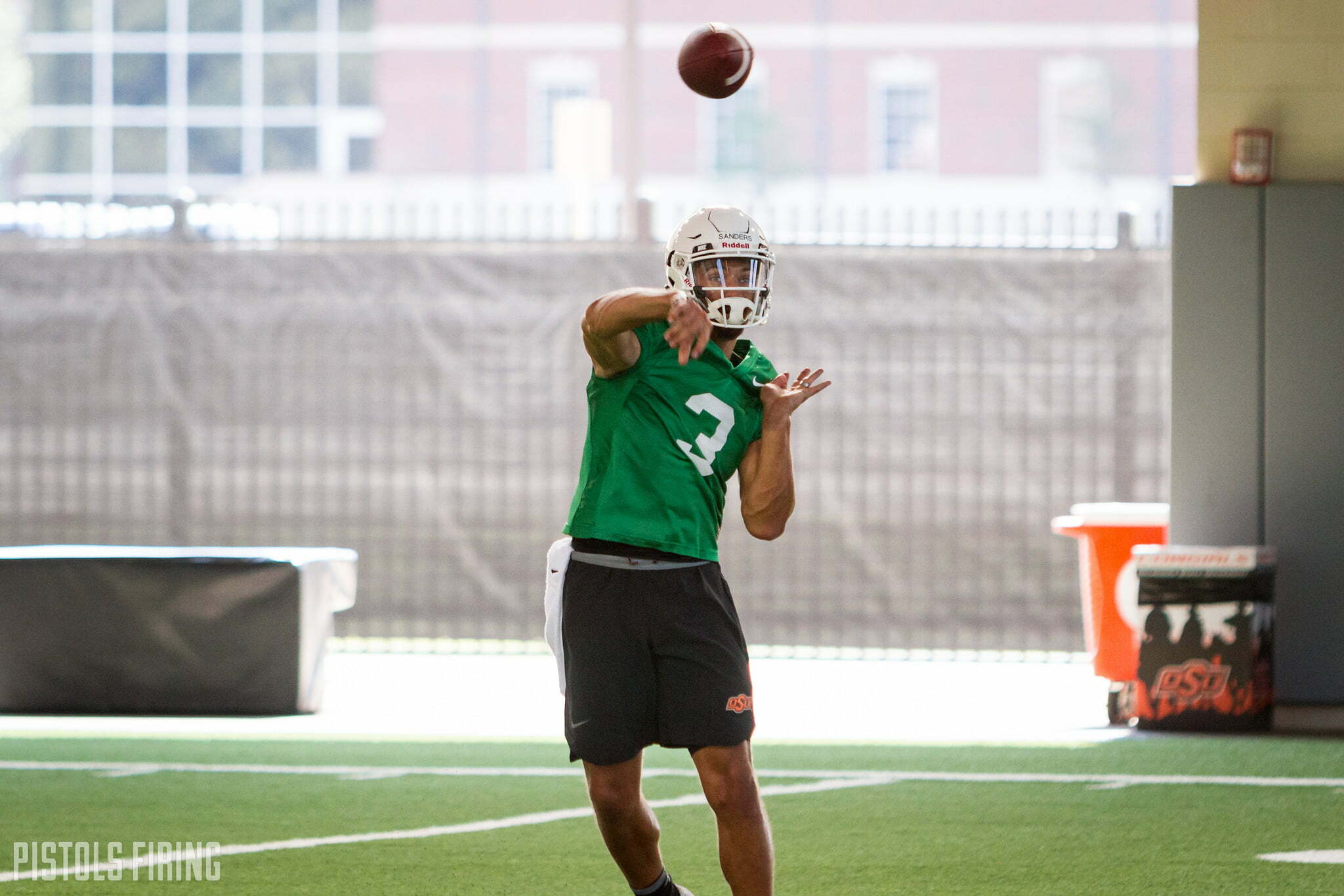 STILLWATER — The Cowboys put on pads this week, as football season will be here soon enough.

After Wednesday’s practice, Oklahoma State coach Mike Gundy met with the media to discuss his team’s progression. Here are some highlights of Gundy’s availability.

The top story of OSU practices is (and will be for a while) the quarterbacks.

Dru Brown and Spencer Sanders are in competition for the vacancy Taylor Cornelius left after last season. It’s a battle that’s been covered extensively for a while, but briefly: Sanders was a star prospect who redshirted last season, and Brown has experience after transferring from Hawaii and also taking a redshirt season in 2018.

“Both quarterbacks are getting work,” Gundy said. “We’re rotating those guys in. They’re coming along. They’re obviously making some mistakes; we’re correcting them. They should be getting a little bit better every day.”

Gundy said over the spring he wants to see the quarterbacks execute the offense without turning the ball over. He said his team has enough guys who are able to make plays, so the real need at quarterback is someone who can play in the system, distribute to the playmakers and not turn the ball over. When listing off playmakers, Gundy name dropped (number dropped in most cases) Tylan Wallace, Dillon Stoner, Landon Wolf, Chuba Hubbard, Dezmon Jackson, Jahmyl Jeter and Jelani Woods.

“(Brown and Sanders) make a lot of mistakes, but they have ability,” Gundy said. “They can make a play if things break down. They’re very willing to learn, and they’re committed. It’s just not something you can hit a fast forward button on. Quarterbacks in most cases get a lot better over a period of time.”

The Cowboys are deep at wide receiver and after Tyron Johnson’s decision to not return for his senior season, there is playing time available.

Gundy mentioned 6-foot-5 redshirt freshman C.J. Moore as a standout through the Cowboys’ early practices. Moore came to OSU as a four-star recruit from Union High School in Tulsa, but redshirted last season as his body developed.

“C.J. Moore is making a few plays,” Gundy said. “He’s coming along. His biggest addition is 25 pounds. He came in here about 158, and I think he’s 185 now or something like that. That’s helped him considerably.”

Gundy said he doesn’t think Patrick McKaufman is 100 percent coming off his ACL tear. Gundy said he thinks subconsciously McKaufman is still a little cautious when cutting. With the talent the Cowboys have at the position, Gundy didn’t seem worried about finding guys to slot into that vacancy, whether it’s McKaufman or someone else.

“We’ll be able to find three guys that can play out there,” Gundy said. “I don’t see that’ll be an issue for us.”

Keep an Eye on Thomas Harper

Gundy said the staff is working to develop some solid back up corners in attempt to lighten the load on A.J. Green and Rodarius Williams, and it sounds like one young defender is off to a good start.

Thomas Harper, brother of OSU linebacker Devin Harper, is on campus as an early enrollee, and when asked about young players who have stood out so far, Gundy went on for a bit about Harper.

“Thomas has made a few plays out here that are pretty impressive for a high school player because he’s supposed to be in high school now,” Gundy said. “He’s competing out here and has made some plays.”

Harper came to OSU as a three-star athlete out of Tennessee. During his senior year in high school, Harper had 1,279 receiving yards and 18 touchdown to go with his 92 total tackles. That all happened a few months ago.

“I don’t see that he’s really scared of anybody out here and his physical ability makes it seem like he’s gonna have a chance to maybe compete earlier than other people,” Gundy said. “It’s still way too early. We’ll know a lot more in a month.”