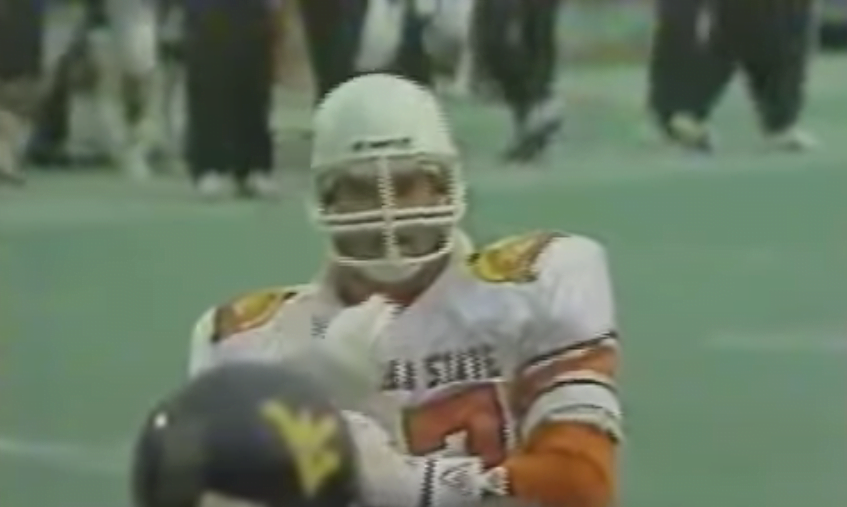 J.R. Dillard after scoring a TD in the 1987 Sun Bowl. (Via YouTube/OSU Athletics)

Former Oklahoma State tight end J.R. Dillard, a talented pass-catcher and blocker for some of the more memorable Cowboys teams in the late 1980s, passed away on Sunday after a battle with COVID-19.

Dillard had been placed on a ventilator over the weekend as he fought the disease. He was 56 years old.

An All-State talent from Cleveland, Okla., Dillard committed to OSU out of high school over Oklahoma and Arkansas and followed after his father, Jim, who starred for the Cowboys from 1959-1961. Jim in three seasons rushed for 1,840 yards and 13 touchdowns.

As high as expectations were for J.R., he met them in what turned out to be a slow-starting, yet successful, college career. Upon his arrival in 1983 he took a redshirt season then slowly worked his way into a role in 1984, where he caught three passes for 34 yards in relief of Barry Hanna. 1985 is where he really took off, bursting onto the scene with 22 catches for 197 yards and a pair of scores. The following year, in 1986, he caught 18 passes for 190 yards and a score. In 1987, his final with OSU, he caught 10 passes for 92 yards and a score.

“It’s no secret that J.R. has more ability than any tight end we’ve had since I’ve been here,” OSU assistant coach Kevin Steele said in 1985 via The Oklahoman. “He gives us a tackle when he’s blocking and yet he has good pass-catching ability. That combination is hard to find.”

Dillard’s blocking was essential to what OSU did in its rushing attack in the late 1980s. He paved big holes for a Hall of Fame backfield that included Thurman Thomas and later Barry Sanders, and embraced his role as a bully in the trenches.

“I enjoy blocking, especially on the goal line for a back like Thurman Thomas,” Dillard said in 1985.

Dillard went out on a high note with OSU, too, catching three passes for 18 yards and a touchdown in the 1987 Sun Bowl. OSU won the game over West Virginia, 35-33, a game in which Thomas toted it 33 times for 157 yards. He accounted for 25% of Mike Gundy’s completions in the game, which was played in snowy, frigid conditions on Christmas Day in El Paso, Texas.

Dillard extended his football career with a stint in the Canadian Football League playing for Calgary before eventually retiring because of a hamstring injury.