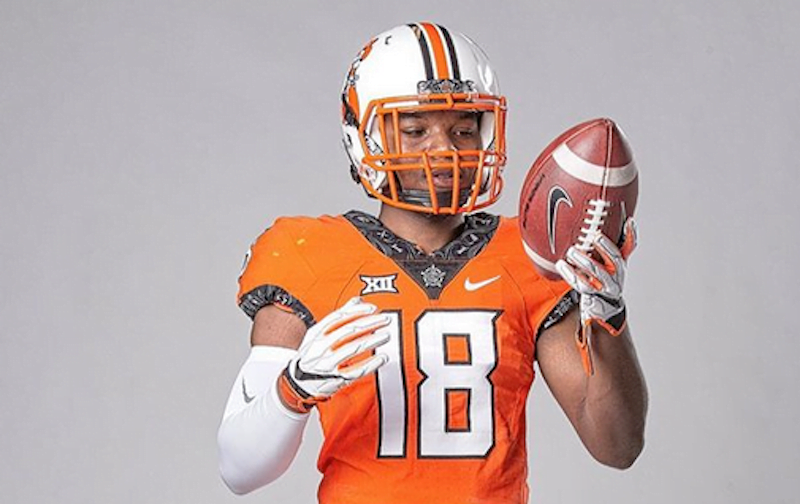 Oklahoma State added its highest-ranked defensive commitment since Darrion Daniels on Friday as Edmond Santa Fe standout Collin Oliver committed to the Cowboys over Ole Miss, Nebraska, Utah and a host of other high major suitors.

Oliver, a 6-foot-2, 220-pound Class of 2021 prospect, is expected to play defensive end/linebacker and will fit in to the OSU scheme in a similar role as Trace Ford, another former Edmond Santa Fe star. Ford last season as a freshman made a name for himself as one of the Big 12’s most disruptive young pass rushers.

“I love the fit,” Oliver told Pistols Firing of why he chose Oklahoma State. “They have a great academic program. I want to get a great education. I’ve already talked with the academic staff a few times through Zoom, and they’re really cool people. But I also like the position they’re going to put me in on the field. They’re going to put me in that hybrid linebacker/defensive end position – the one Trace Ford is playing. It’s a perfect position for me and where I see myself in the future. Then you add the great coaching staff, the fanbase, it’s just all there.”

Oliver’s commitment continues on with the Edmond Santa pipeline for OSU that has paid dividends in recent years, as he joins Trace Ford, a 2019 signee, and Calvin Bundage, a 2016 signee, among recent standouts from the school to pick the Pokes. Unless OSU adds another high profile defender in this class, all three of Ford, Bundage and Oliver will be the highest-ranked defensive commitment in their respective recruiting classes, per 247Sports data.

The commitment gives OSU a needed recruiting win that keeps one of the state’s best overall prospects within the state borders. Oliver is the highest-ranked pledge of OSU’s 2021 class that’s up to five commitments, four of which have joined the fold in the last three weeks. It bumps OSU’s standing in the national recruiting rankings up from 73rd to 64th, and from 10th in the Big 12 to 9th.