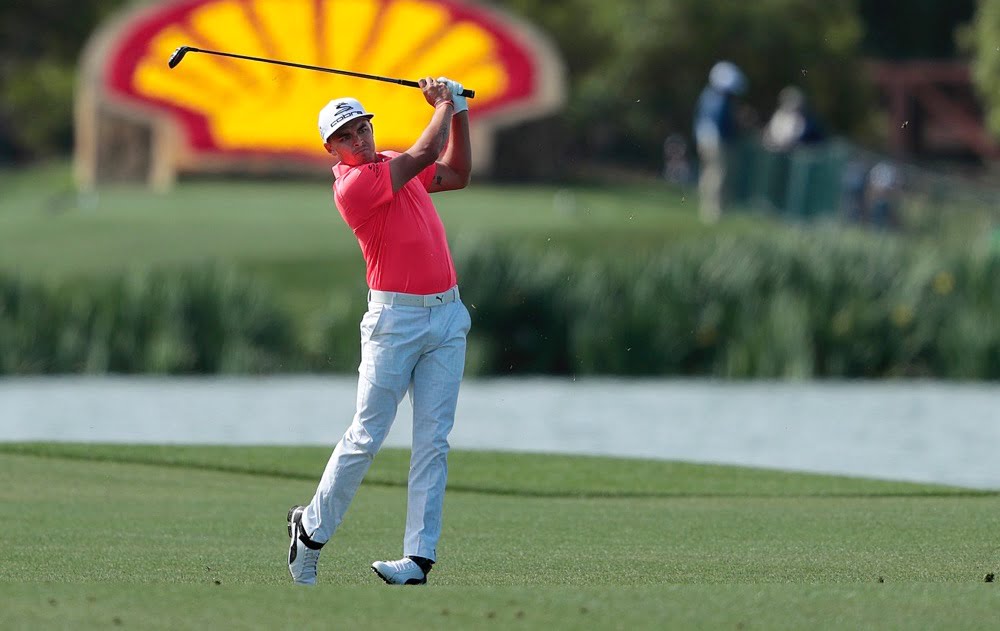 Rickie Fowler shot a bogey-free 64 on Thursday in Round 1 of the Shell Houston Open. It was his best score at that event by four strokes in 21 career rounds there. He leads at 8 under by one over Sung Kang who made bogey at the last.

The highlight of Fowler’s day was a near-ace at the 230-yard par-3 ninth hole (his last of the day). His assessment of the shot was hilarious.

“I may have caught it a groove low, but it was a shot I was trying to hit,” said Fowler. “We had 230 hole and no help. The wind was off the left. Trying to hit a low bullet 4-iron that kind of would pitch kind of between 10, maybe 15 on, and that’s exactly where it did and, yeah, it was scary.”

Fowler is looking for his second win of the year, but more importantly he is looking for the top of his game heading to Augusta for the 81st Masters next week. And it’s already been a pretty great season. Here are Fowler’s six finishes on the PGA Tour so far this season.

Fowler has just one top 10 at the Masters — a T5 in 2014 — but he’s one of the favorites this time around. And those odds will improve if he wins in Houston.

He skipped the WGC-Dell Match Play last week because he didn’t want to play four tournaments in a row heading into the Masters. A wise move that’s looking that much better after this 64 in Houston.

“It’s definitely been trending and building this way,” said Fowler on Thursday. “I felt very good the last few months. Definitely playing in Phoenix and playing well there, got a good Sunday and that kind of set-up two weeks off to go prepare and get ready for Honda, and it’s been great. I’ve had a lot of confidence in the swing and the game. Kind of continue to tighten it up.

“Nice to have the week off to kind of relax, recharge a bit, and I love playing here. I like playing my way in the majors and they’ve been able to do a great job here with just conditions around the greens and making it similar as — as similar as possible to next week. Like I said, just playing and going through the process and getting ready, makes things a lot easier when you go tee it up Thursday next week.”

First, three more round in Houston as Fowler goes for his fifth PGA Tour win.

He’s also throwing out the first pitch at the Astros-Cubs game tonight.