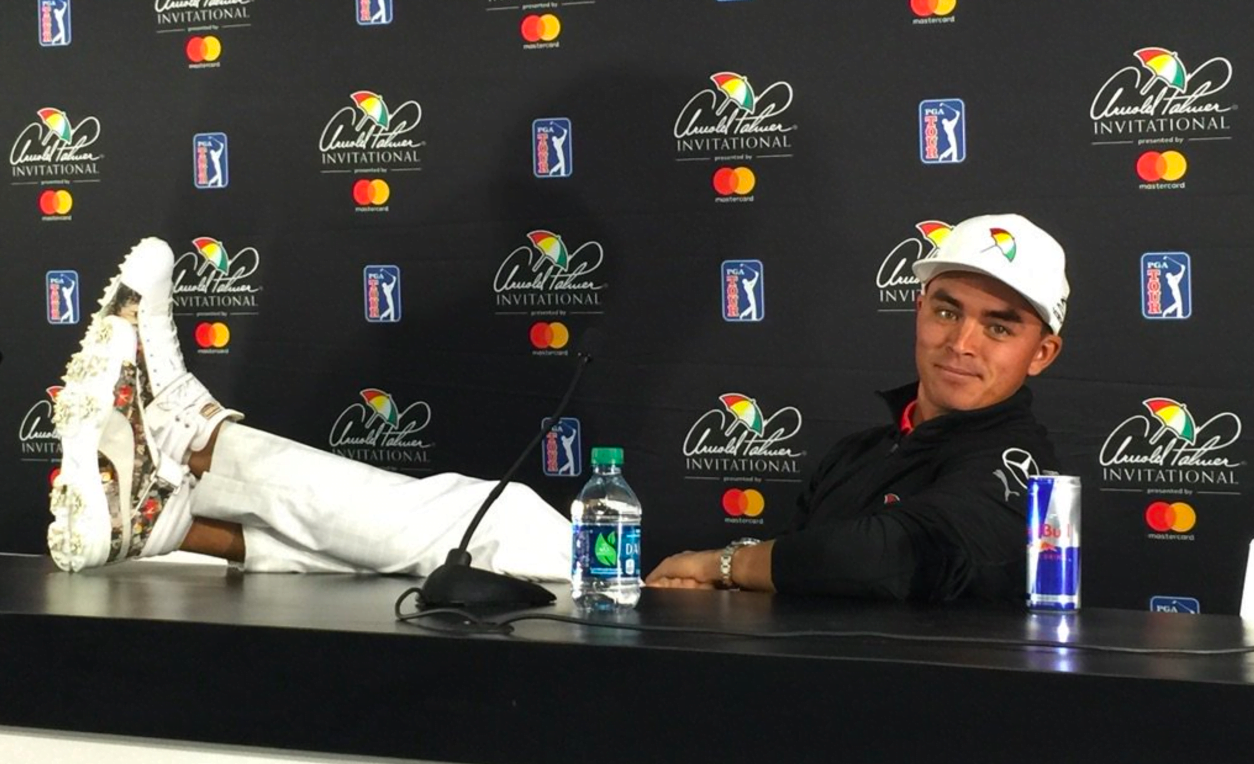 BAY HILL, Fla. — Rickie Fowler is one of a handful of golfers paying tribute to Arnold Palmer at the Arnold Palmer Invitational this week. Fowler is rocking Palmer’s logo — a green, red, yellow and white umbrella — on his hat and attire this week. He’s also wearing some Palmer-themed shoes that he said were custom made for him.

“I would like to say I had some sort of involvement, I didn’t,” said Fowler who finished T3 at this tournament in 2013. “This was a surprise. Another case where Puma kind of stepped up and did something special to go out and have a, do a collaboration.

“I had only heard that there was something in the works, I didn’t know really what it was, just being able to wear the logo and hat, clothing and stuff is fun and something different for the week and it is cool logo. Everyone knows what the umbrella is and what it stands for. But to have the shoes, something different, it’s kind of a collage of Arnie through his years of golf.”

A closer look at the shoes @RickieFowler will be wearing this week to commemorate #TheKing#APInv pic.twitter.com/Tm5tX8rtQ4

Fowler was also surprised when he was told that the only hat Palmer has in his untouched office here at Bay Hill is one from Fowler. It is autographed.

Only hat in Arnold Palmer's Bay Hill office is the one @RickieFowler signed for him last year after lunch together. "To the original King." pic.twitter.com/C2dxBQQo0e

Speaking of that lunch. Fowler said Palmer’s presence was so overwhelming that when he drove to Bay Hill to tell The King he wasn’t going to play last year, Palmer almost change his mind just by looking at him.

“It’s great being back after having missed last year and I told a lot of people it was one of the hardest things I had to do was come up ear here, have lunch with Arnold, and tell him that I wasn’t going to be able to play,” said Fowler.

“The kind of look he gave me when I told him I wasn’t going to be able to be here was, it was hard to stick to what the plan was and what I was trying to do with the schedule.”

Fowler has always been a historian of golf and one of its best ambassadors. He’s looking for win No. 5 of his career and No. 2 on the Florida Swing this year (he also won the Honda Classic). He’ll have to hold off a field that includes Rory McIlroy, Jason Day and Henrik Stenson to do it.

Rickie Fowler (and his Arnold Palmer-inspired shoes) are now in the interview room. pic.twitter.com/Orm0HPBXM2

The love for Palmer didn’t stop with Fowler, either. It has been present all over the course and the tournament this week. Golf changed because of Palmer, and everybody knows it. I wrote a little bit more about that here.

But Fowler summed it up well.

“It’s different not having him here, but like I said before … legends never die,” said Fowler. “He’s always going to be here, this tournament’s going to go on, he was a special man, and I’m happy I was able to call him a friend.”