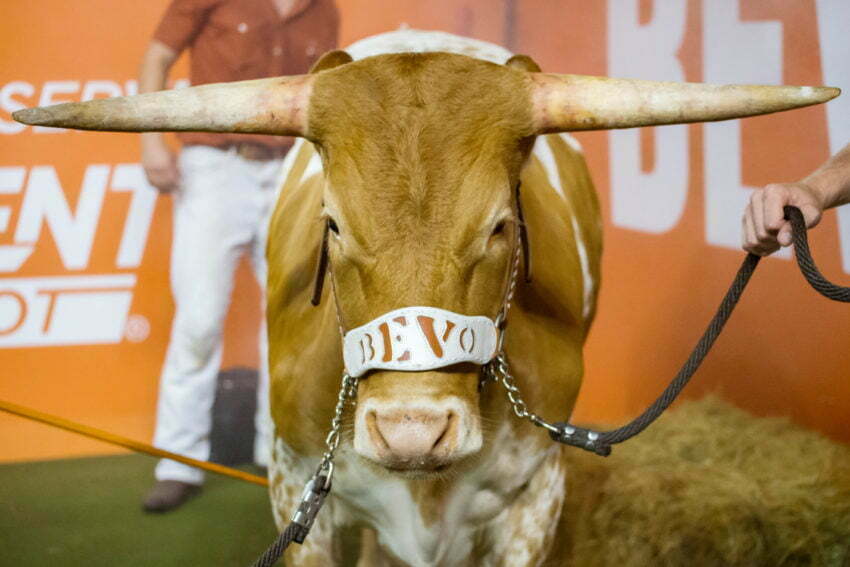 This weekend, Oklahoma State will try to do something no other college football team in history has ever done; beat Texas in Austin five-straight times. But what will the Cowboys face when they take the field at 11:00 a.m. on Saturday?

As we do every week, we talk to someone who covers the opposing team to get a good idea what we can expect. Joining me this week is Taylor Estes, Managing Editor for Horns 247.

Taylor talks about the improved defense, why Texas is giving up big plays, which position is to blame for the offensive struggles, and what kind of mindset the Longhorns will bring into the game this weekend.

If you’re interested, the full audio interview is available to listen to at the bottom of this post. As always, I apologize for my shortcomings as an interviewer.

Phillip Slavin: So far Texas looks better this year than they have in the past few years under Charlie Strong. What do you think about the job Tom Herman has done so far?

Taylor Estes: “I think that the staff has done a really good job of getting the players to play up to their talent level. Charlie Strong did a really good job of recruiting really talented players, some of the top players in recruiting rankings nationally. When it came to the on-field production, I think a lot of people were like, ‘what the heck?” These were supposed to be four and five star recruits coming in and they’re missing tackles left and right, they’re just getting gashed in the run gun. They put up back-to-back years of the worst statistical defense in school history. Now these players are going into junior year. I do think that does have something to do with it. A lot of the 2015 recruiting class that has been starters basically since they were freshman on campus. A lot of times when players get to that upperclassmen level, things just finally start to click. They stop thinking so much and just kind of react the way they naturally would if they weren’t thinking about what they had to do every single step of the way. I do think that definitely plays a factor into the on-field production, especially on defense for Texas. I’d say Todd Orlando has done a really good job of getting these guys to not think and get to that point that they could kind of have that third-year come out-party. I think that Charlie Strong struggled with that a lot. The players would talk about how they never would execute, or they weren’t executing the gameplan, the coaches put them in the right position but they weren’t executing. But there’s a reason why they weren’t executing and I think it was the coaching style. I do see that as changing. The record doesn’t show it but agree with you, I think this is a better Texas team from top to bottom from what it has been in years past.”

PS: Despite the defensive improvements, Texas is still giving up big plays this year. They’ve given up at least on long scoring play in each game. Why is that?

TE: “I think a lot of the big plays have come against the secondary. There have been definitely bright spots in the secondary. Safety Deshon Elliott has had a really good junior year. Holton Hill, cornerback, had a really bad slump as a sophomore. He ended up not even playing much last year after being a freshman All-American candidate after his first season. I think that the big plays may just come within communication. Deshaun Elliot is back there but there is also Brandon Jones next to him, the other starting safety who is a true sophomore. While he did play some in his true freshman season he didn’t really play enough to where he’s gonna be the guy reading the whole field. Just because of his lack of experience. So I do think the communication aspect has been a reason for the big plays. But, also I think the fact that the offense is not really pulling its weight at all times. Some of the big plays, if you look, the Texas defense has been on the field a lot in games this season. I think that when defenses get worn down, that’s when they’re most susceptible to getting up those big plays that they have been. So I think that plays into it as well.”

PS: What is causing Texas’ offense to struggle, especially early in games?

TE: “I think it starts up front honestly. I think the offensive line has been a really big Achilles heel for this offense, especially with the run game. Texas has a lot of running backs on the roster that are very talented players, but they haven’t made much of an impact this season, I think because by the time they get the ball there’s a defender in their face. So I think that the issues on offense definitely start up front. I think if the offensive line can even play decent, I think that this offense would be different-looking, and I wouldn’t be surprised if the record showed that too.”

PS: One of the biggest issues Texas has had since Colt McCoy, has been finding “the guy” at quarterback. Is Sam Ehlinger “the guy” or just another guy? 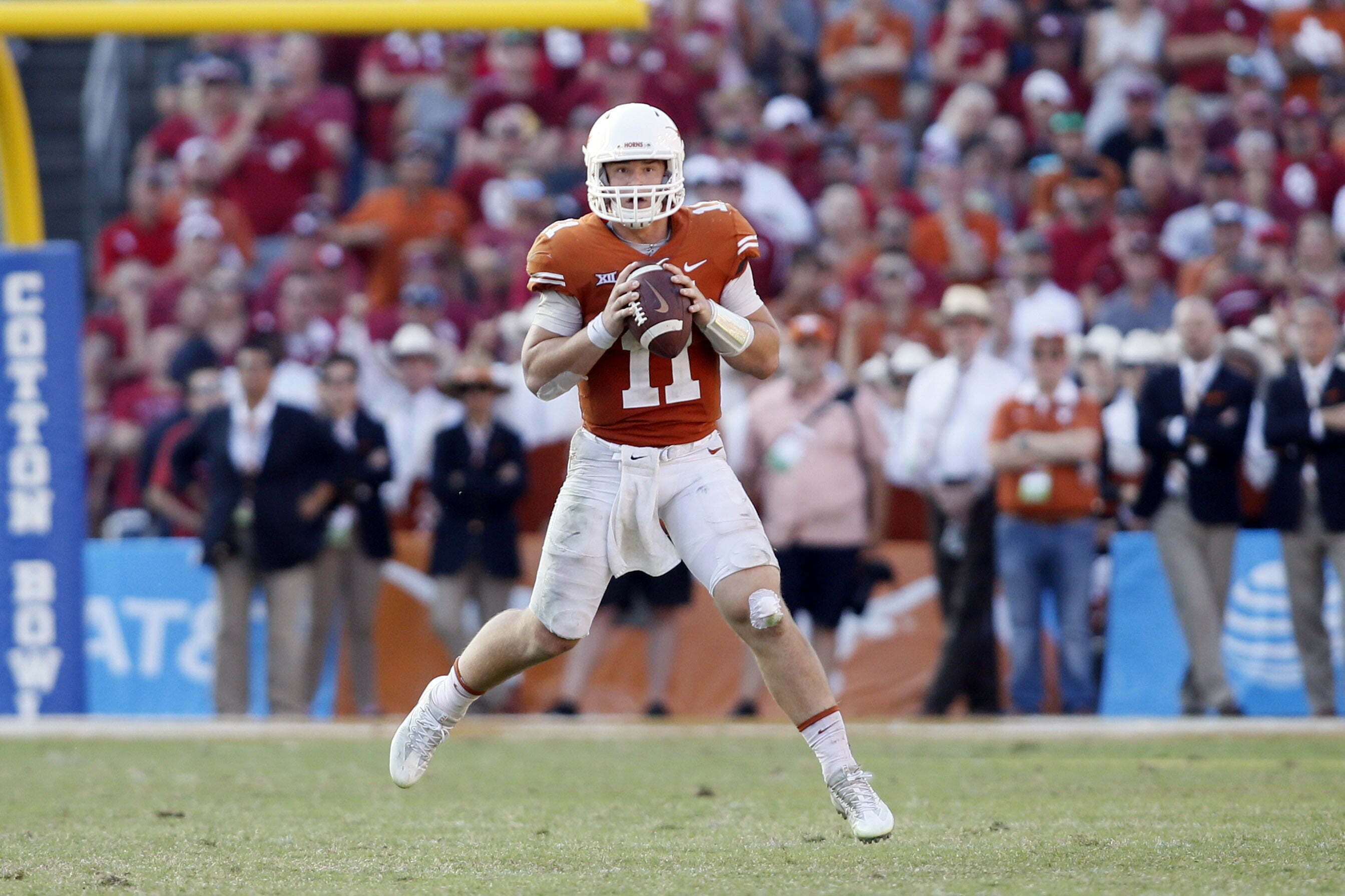 TE: “I actually had this conversation with my husband last night. I’ve watched a lot of quarterbacks come through this program in my career, and I just started in 2011. However I’ve seen Garrett Gilbert, David Ash, Case McCoy, Tyrone Swoopes, Jerrod Heard, Shane Buechele, and now Sam Ehlinger during that time. After his first game against San Jose State I was very hesitant to really anoint him as anything, because,you would hope the Texas offense could move the ball against San Jose State. I think after seeing him play against Oklahoma, after seeing him play against Kansas State and USC, I think that this might be the real deal. And that’s absolutely the first time that I’ve said that since I started covering Texas in that time frame. I could be wrong, maybe it’s just something that, teams haven’t really figured out how to really stop him and stop his legs because they don’t have very much game film on him. I’m not sure. Time will tell with that. But I did watch Ehlinger in high school a lot and I saw him in games where you were just like ‘whoa’, you don’t expect the type of plays that he makes and he make them consistently. That’s just the kind of player that he is. I would say at this point Ehlinger probably is the future of Texas football. That might be my famous last words. But I feel that the position itself is in a much better standing than it has been in the years since I started covering this team.”

PS: Coming off the Red River Rivalry game, do you think Texas will have either a hangover after such an emotional game or will they have a chip on their shoulder after losing the way they did? 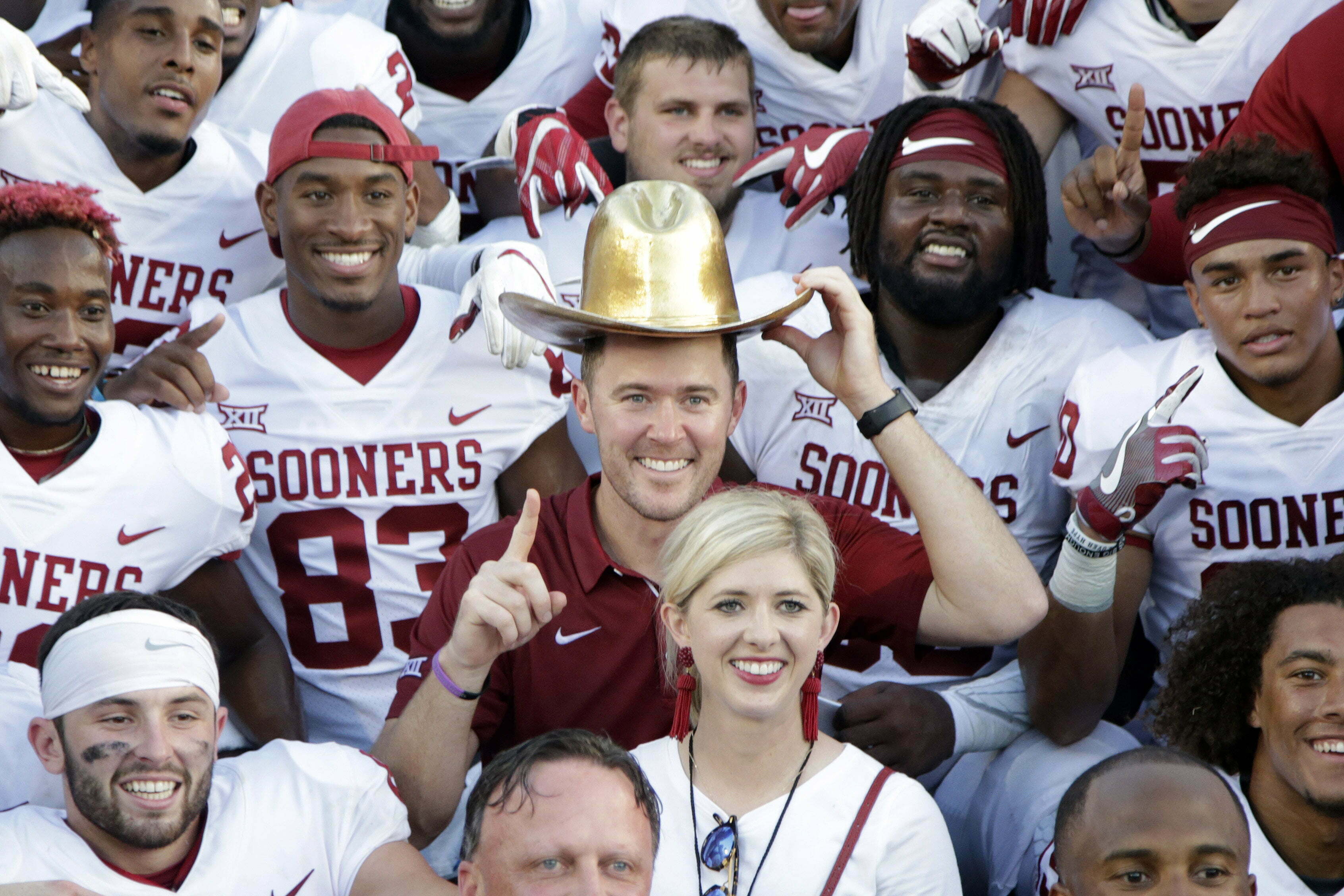 TE: “I think that with it being a Tom Herman-led team, I would be surprised if they didn’t come with a chip on their shoulder at this point in the season. When Texas entered the Maryland game at the start of the year, it kind of looked like the Texas of years past. Since that we haven’t really seen the players revert back to their old ways. If this was last season, I would say yeah they’ll probably get… I kind of think Texas is going to lose anyways, but I would say that they would get smoked by, especially this Oklahoma State team. But I would be pretty surprised if they just had a hangover or if their focus wasn’t in the game. But, I don’t think that means that Texas is in any way, shape, or form just going to surprise Oklahoma State and do something crazy come Saturday.”

PS: Who is the one Texas defensive player that could disrupt the offense and cause trouble for Mason Rudolph? 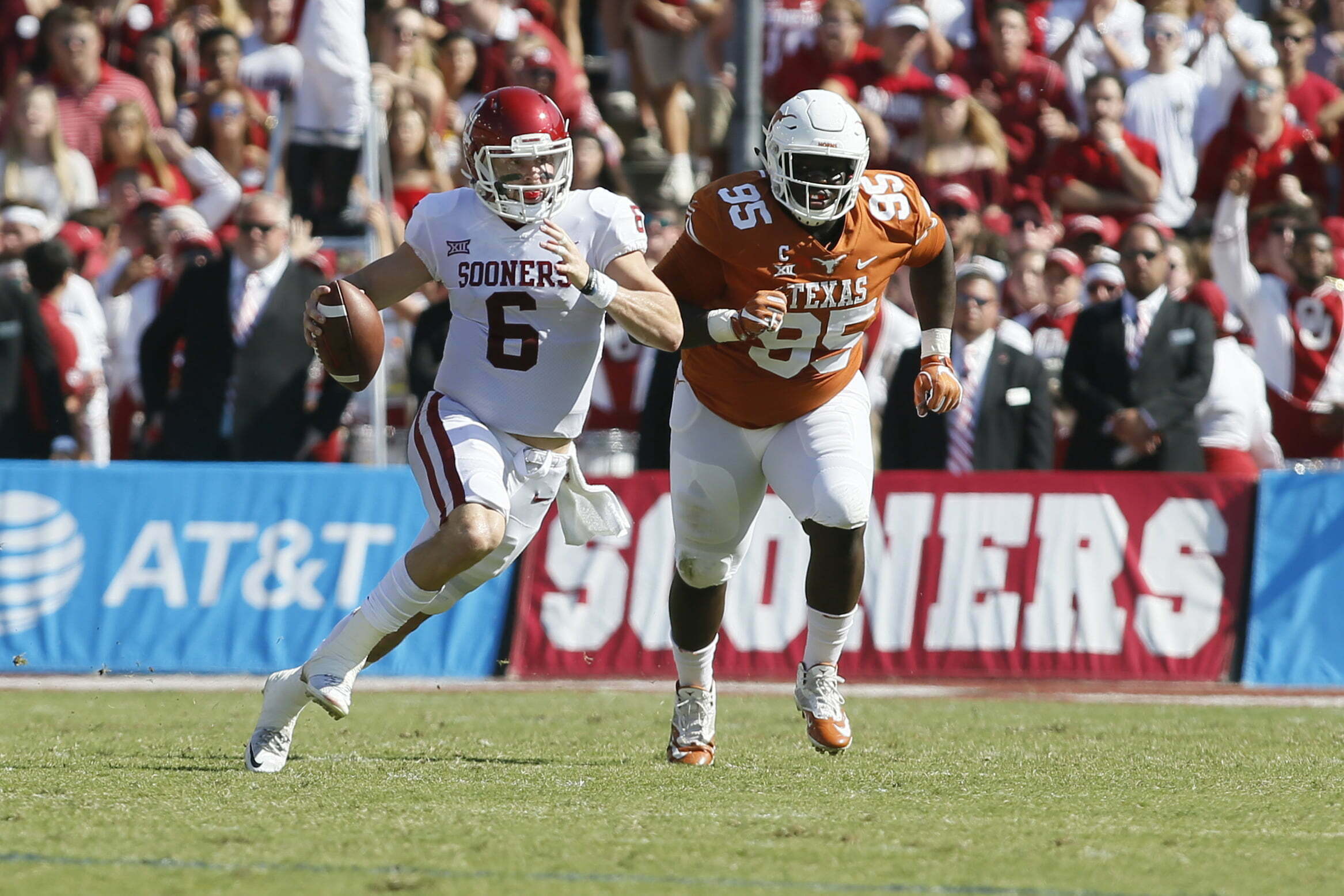 TE: “I think the people you would have to look at are Poona Ford, the defensive tackle, and Malik Jefferson. When you talk about the run defense I think that’s a huge credit to Poona Ford. Usually it all starts up front when it comes to a teams’ performance and I think Poona Ford has done an exceptional job this year in helping stop the run. I think with combining him with Malik Jefferson, I think it’s extremely important for them to put that pressure on Mason Rudolph if Texas is going to see some kind of success in this game. If they can pressure Mason Rudolph, get him off of his rhythm, then that impacts not just the possible run game, but also him throwing the ball. So it definitely starts up front with Poona Ford and Malik Jefferson coming off the edge.”

PS: If Texas were to win this game, what did they do to make that happen?

TE: “I think it would start with the defense. The defense would have to find a way to limit Oklahoma State’s offense from putting up a lot of points. I think the defense knows that they’re going to probably give up points to Oklahoma State, and if the Texas offense was in a better situation than it has been, this game may be different. But the fact that the Texas offense has really struggled to put up a lot of points this season, makes it even more important to limit the amount of times that Oklahoma State’s offense sees the endzone just so, they can give the offense the chance to try to put up 30 points. If the Texas defense could have a performance similar to how TCU played Oklahoma State, and limited them to 31 points, then I think Texas could be in this game. It’s just, that’s a big, big, big if at this point.

If you have time, listen to the full 19 minute interview. Taylor delves more into the issues on Texas’ offensive line, if Ehlinger is expected to be 100 percent against OSU after getting beat up by OU, and if the Longhorns will continue to focus on shutting down the run or if they’ll adjust their defensive scheme to prevent the big passing plays.