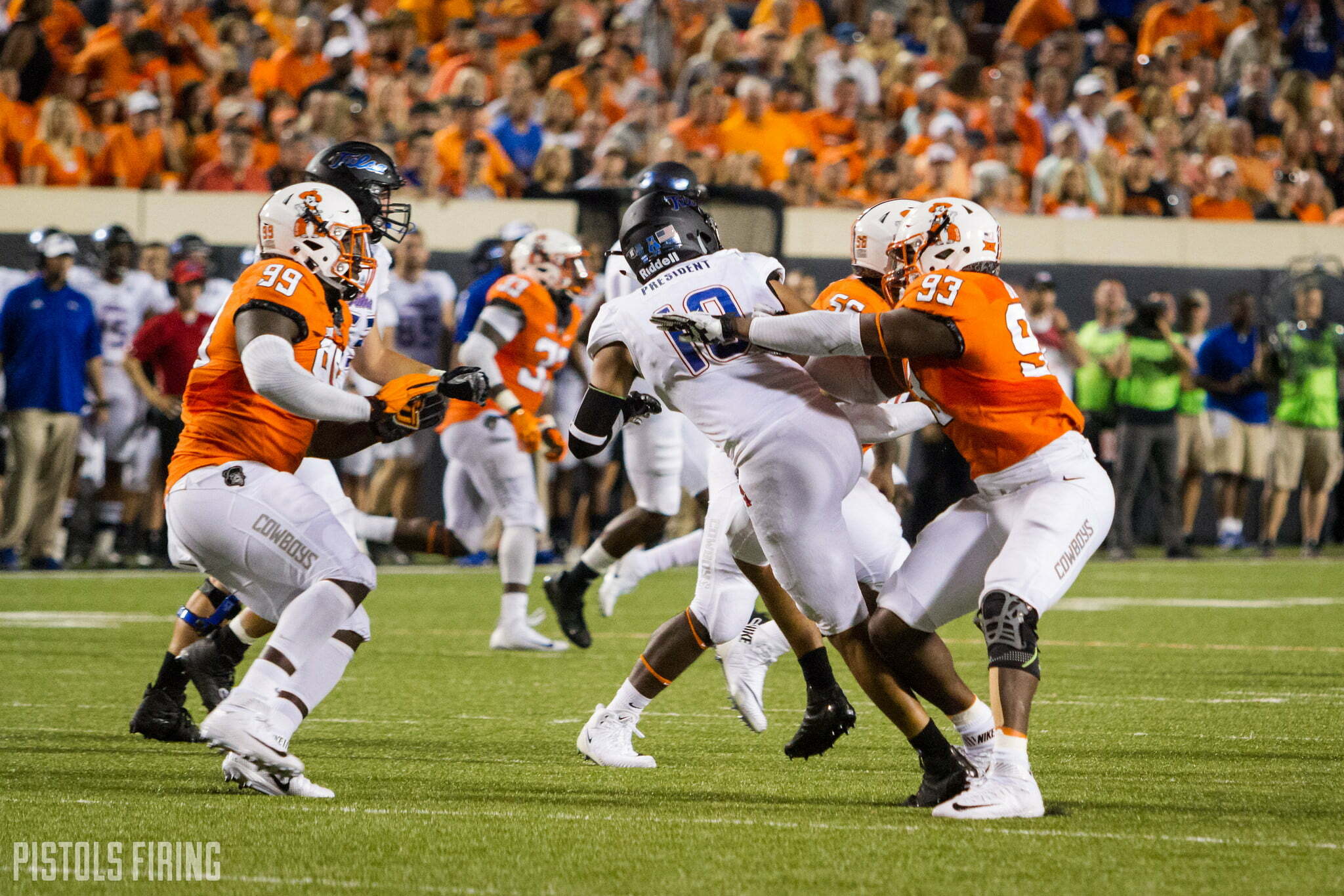 Other than protecting your own quarterback, getting to the opposing quarterback might be the most important objective in football. That’s the primary job of the defensive end, other than setting the edge. Defensive ends use a combination of strength and agility to get past offensive linemen and into the backfield, where they sometimes encounter a pass-blocking running back or fullback.

Explosiveness is key at this position, and of all the positions on defense, defensive ends might have the highest propensity to make momentum-shifting plays, such as a strip-sack.

Defensive tackles also have an important job: stopping the run and plugging the holes created by offensive linemen. Defensive line coach Joe Bob Clements has had success in his five years in Stillwater. Per okstate.com, the Cowboys averaged 19.5 sacks per season in the three seasons prior to Clements’ arrival. In the five years since hiring him, OSU has averaged 25.7 per season. What players will Clements have at his disposal now and in the future? Let’s take a look (we will break this into two parts — DE and DT and look at the DEs today and DTs tomorrow).

Let’s take a look at OSU’s current and future at this position.

All ratings and measurements are from 247sports.com

Hicks, a four-star prospect, is among OSU’s top defensive end targets. He’s the No. 1 recruit in the state of Kansas and is the 15th-ranked weak-side defensive end in the country. If his highlight tape is any indication, he has a serious knack for using that long wingspan to knock down or deflect passes at the line of scrimmage. Predictions have him going to Oklahoma, but Oklahoma State is among the five teams he is considering.

Osafo-Mensah is leaning toward Notre Dame but has many illustrious programs on his offer list. He’s the sixth-ranked weak-side defensive end in the country and is a top-20 player in the state of Texas. His strength jumps out at you on his highlight tape, and it does not take him long to get into the opposing team’s backfield. Highlight tapes can be misleading, but it’s easy to see why Osafo-Mensah has so many offers.

Ellison is a three-star prospect who looks to be deciding between Notre Dame and TCU. He’s just outside the top 50 prospects from Texas and is the 31st-ranked weak-side defensive end in the country. He doesn’t seem to use raw strength to power through most blocks, but he’s adept at disengaging before tracking down the ball carrier.

Brooks is a three-star prospect that Oklahoma State fans should be confident about signing. That is, if 247sports’ crystal ball is any indication. National expert Greg Powers has Brooks going to OSU, and more than 90 percent of Powers’ predictions have been correct. Brooks is the 50th-ranked weak-side defensive end in the country. He’s a tall, intimidating presence with a long wingspan, which helps him disrupt passes at the line.

Ugwoegbu has a last name nobody wants to appear during a spelling bee and is gonna be something play-by-play announcers struggle to pronounce. Seeing as though he’s a top-50 prospect in Texas, his name will be called a lot. Ugwoegbu, a three-star recruit, has an impressive offer list from all over the map.

Hundley is a three-star recruit and is among the top 100 recruits in Texas. He has only four offers, but OSU’s biggest competitor might be Washington.

Henderson is a three-star recruit who ranks just within the top 200 players in Texas. He doesn’t have many other big-time offers at the moment.

I’d say OSU has a good chance of landing Carter, a three-star prospect. The list of offers from other teams isn’t all that impressive compared to the aforementioned players, and OSU is one of three teams on the list in either Texas or Oklahoma. If he wants to go to school far from home, that obviously changes things. Carter is by far the heaviest prospect on this list thus far. He’s vicious, and his raw strength shows. He just rips people to the ground.

Clay is a top-five prospect in Oklahoma and has caught the eye of several other big-time programs. Predictions have him going to either OU or Arkansas.

Ford is the 31st-ranked strong-side defensive end in the country and is the sixth-best player in Oklahoma. He has offers from schools across the map. Highlights can be deceiving, but from what I’ve seen, Ford is fast, powerful and decisive. He’d be a nice get for OSU.

Gold is a three-star prospect but ranks outside the top 900 overall prospects nationally. His offer list is long but isn’t tattered with top-tier choices, so OSU should be one of the favorites to land him.

Brunson is a three-star recruit with only three offers thus far. He ranks outside the top 1,000 recruits nationally.

Dorbah doesn’t have any sort of ranking out yet per 247sports.com, and he only has two offers. He attended OSU’s Junior Day on Jan. 16.

TCU was once the leader to land Scott, but that changed as he committed to OSU on Oct. 26. Scott is a three-star recruit that was once a top-five player in Texas, and he’s also a former SMU signee. He’ll have three years of eligibility.

Projections had Cassity split 50-50 between OSU and Wisconsin, but nonetheless, he’ll take his talents to Stillwater for the 2018 season. He was a first-team all-district selection at defensive tackle as a junior, and he recorded 101 tackles and 11 sacks in his final high school season.

Lacy is a three-star recruit who picked OSU ahead of many other respectable programs. He has great size and was a second-team all-district selection as a junior.

An NJCAA All-American, Fofana was a top-10 strong-side defensive end prospect coming out of high school. He has an absolutely massive frame, and it’ll be interesting to see what he’s able to do with the help of Rob Glass this year and beyond.

OSU will lose Waltersheid and Owens, but they’ll get two more years out of Brailford. Excitement is high for Martin, who has an opportunity to make a big splash next year, if not in his redshirt freshman season.