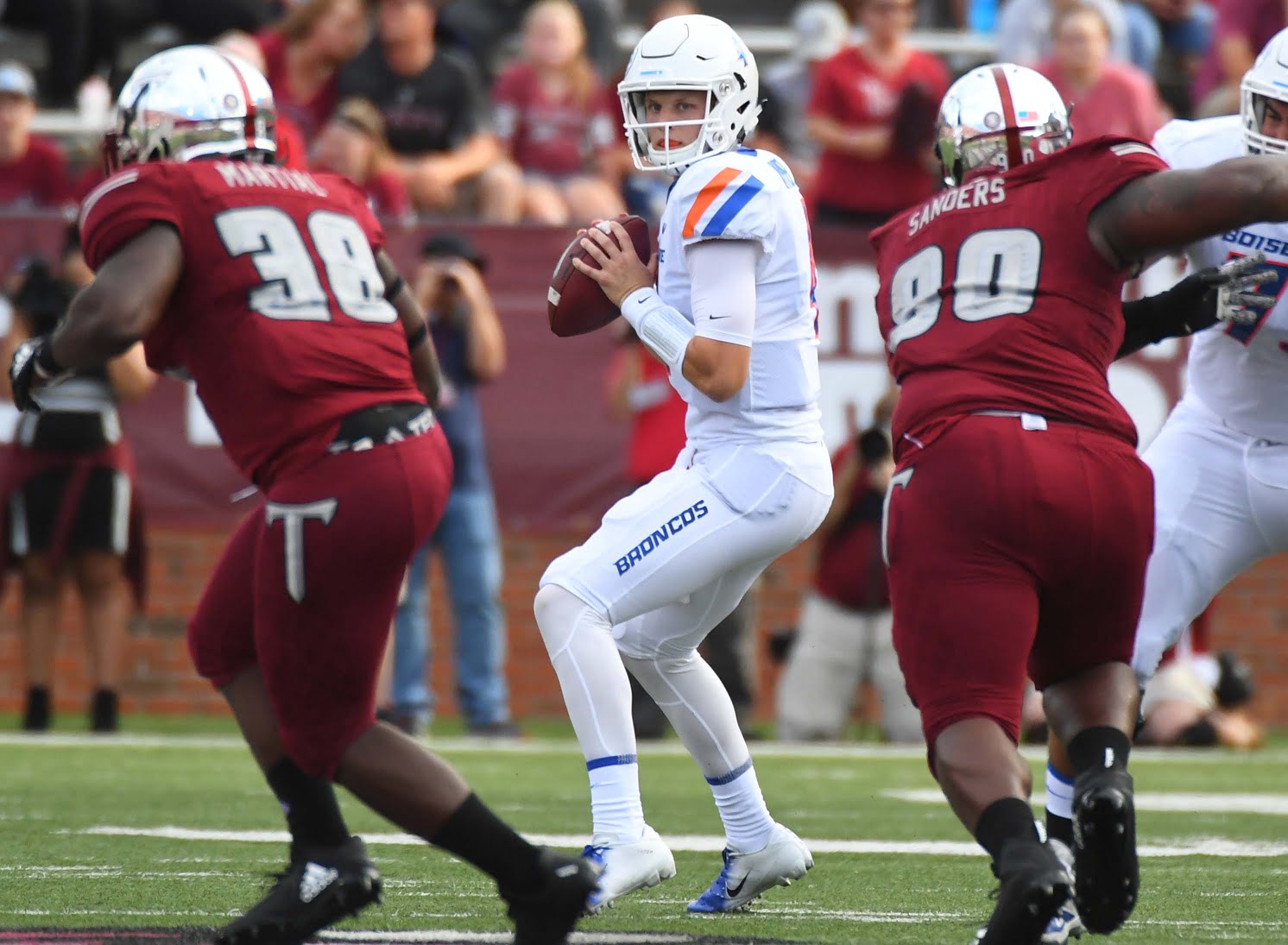 Boise State heads to Stillwater this weekend with one of the top statistical offenses in the country. Now, these numbers are slightly inflated having played Troy and UConn in their first two contests. Although Troy is a lower-tier team, they definitely should not be overlooked, as LSU found out a year ago, but UConn is a bottom-feeding AAC team who will most likely miss bowl season.

Boise State has an incredibly talented offense which produces points year after year, and they are going to be a difficult test for Jim Knowles and the Cowboy defense come Saturday.

So, before they come to town, let’s take a look at what this Boise State offense is all about.

The offense is led by senior quarterback Brett Rypien (6-2, 202). Rypien is one of the most talented and experienced quarterbacks in college football. He’s thrown for over 10,000 yards and 67 touchdowns in his Boise State career, and he’s looked solid this season throwing for 300+ in both contests with no interceptions. Rypien has good pocket presence and does a great job of finding the open man. He’s not much of a rushing threat, but he’s mobile enough to get outside of the pocket when needed.

In addition, Rypien has plenty of weapons at his disposal. Boise returns their leading rusher from last season in Alexander Mattison (5-11, 211), and although he didn’t have an amazing performance against Troy (56 yards on 4 yards per carry and a score) he absolutely torched the Huskies last week going for 115 yards on 10.5 yards per carry and two TDs.

As far as receivers go, the Broncos lost their top man from a year ago along with both of their go-to tight ends, but they return the productive senior Sean Modster (5-11, 189) to lead this group of receivers. A.J Richardson (6-0, 212), John Hightower (6-2, 183) and deep-threat CT Thomas (5-8, 171) are names to remember for this weekend’s contest, along with former four-star recruit, freshman Khalil Shakir (6-0, 186), who they use as both a runner, receiver and return man.

Bryan Harsin was the offensive coordinator for the Broncos from 2006 to 2010 and then when he was hired as head coach in 2014, he maintained co-offensive coordinator duties until last season. At that point, Zak Hill took over sole responsibility of the offense after spending his first season with the team splitting the title with Harsin. Even with the new coordinator, this Broncos team looks similar to what we’ve seen from the Harsin-run offenses of the past few years.

Boise State’s offensive scheme is based around gaining a numbers and spacing advantage at the point of attack. They utilize spread concepts, pro concepts and plenty of motion to accomplish this goal. The Broncos are as close to being a “multiple” offense as you can be and the main objective of their gameplan is to get the opposing defense out of position and attack the weak point.

Harsin and Hill mostly run out of 12 personnel (one running back and two tight ends), with Rypien both under center and in the shotgun. They don’t truly have one specific “scheme”, but their offense is always effective and causes a lot of confusion and headache for opposing defensive coordinators.

Now that I’ve covered the basics behind the offense, let’s look at three key things to watch for from the Broncos on Saturday.

As I mentioned above, Boise State uses a lot of “eye candy” to try to confuse the defense and get them out of position. All of this pre-snap movement can make it tough for defenders to keep their assignments straight.

They will even send a man in motion, and put him back in the exact same spot he started in, as you see in the clip below from the UConn game.

The Broncos will run odd motion, like you see below, and completely change the balance and strength of their formation.

And then they’ll come right back the next play showing the same look with the same motion and run something completely different.

Boise State will also give it to the motion man running a good amount of fly sweeps, and a Bob Stitt staple, the “touch pass” fly sweep.

The Broncos used motion on a very high amount of their plays against both Troy and UConn and I expect we won’t see anything different against the Cowboys. The Oklahoma State defense will need to have great communication and not fall victim to Harsin and Hill’s pre-snap movement.

This is really a sub-set of the section above, but the Broncos use so many two-tight end formations and have so much tight end pre-snap motion, which you don’t see a great deal of in the Big 12, I wanted to call it out on its own.

Boise State loves to line up two tight ends on the same side of the field to create an extra gap and run the ball to that side.

Then, when they have the defense cheating over to the two-tight end side, Harsin and Hill will dial up a run to the weakside and catch the defense off guard. The addition of the wide receiver motion on the play below causes the defense to account for the sweep, and the running back has a pretty easy path to the end zone.

And when the Broncos have the defensive coordinator’s head spinning after hitting a couple of sweeps and a couple of inside runs off the unbalanced two-tight end look… they’ll throw a pass.

And they won’t just keep the tight ends on same side of the formation, they will move them all around, split them out wide, do whatever they can to keep the defense guessing.

Finally, the last section I’m going to discuss is the play-action pass. I’ve shown some passing plays above, and the Broncos also use a fair amount of RPOs, but they are truly dangerous with their straight up play action calls. It seems like almost every game they bust a play action pass for a huge gain. Boise State wants to get their run game going early in any matchup, even with a talent like Rypien under center, and when they are able to do that… it usually leads to fireworks.

The Broncos do such a great job of setting these plays up. The will run from a certain formation:

And use play action out of a very similar look.

If the defense starts to cheat one way or the other, they are going to get burned by this talented Boise offense.

This will be the first real test for Jim Knowles as Oklahoma State’s defensive coordinator and I’m very excited to see if he and the Cowboy D are up to the task. As I noted above, communication will be key on Saturday and hopefully Knowles will keep it simple in regards to motion adjustments. In addition, OSU will need to get pressure on Rypien early and often, and force him into some of the unforced errors he made early in his Boise State career.

Oh… and you always have to be on the lookout for trick plays when you face this Bronco team, as the Sooners know all too well.