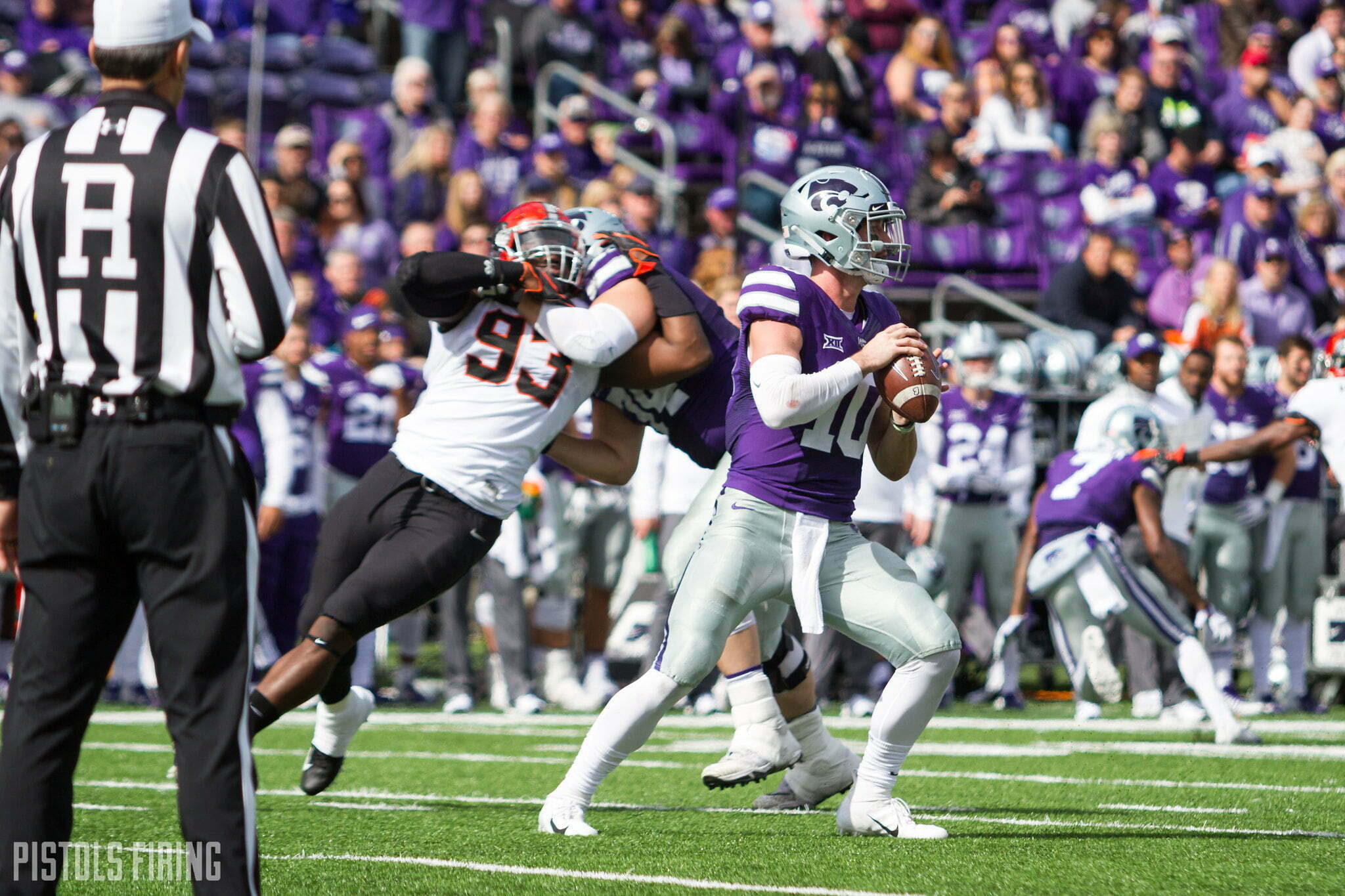 Oklahoma State’s game in Texas last weekend was weird, and history says this weekend has a good shot at getting a little funky, too.

Oklahoma State hosts Kansas State at 6 p.m. Saturday in Boone Pickens Stadium. There haven’t been many games between these two this millennium decided by more than a touchdown. We’ll look more into that later, but here are some stats entering Saturday.

Now a junior at K-State, Thompson is a better passer this season than he was in his first two seasons. In the Wildcats’ three games in 2019, Thompson has completed 68 percent of his passes for 486 yards and four touchdowns.

“It gives you confidence going in that you can have success at a place if you’ve been there before,” K-State coach Chris Klieman said of Thompson’s success against OSU. “You still have to execute. He still has to have a tremendous week of preparation because, obviously, it’s a different offense and it’s a different style of defense, so to speak. So we’ve got to continue to prepare on a daily basis.”

A History of Tight Games

Since the turn of the century, OSU and K-State have played 13 times.

Eight of those 13 games have been determined by seven points or fewer. Let’s look at those.

2003: The Pokes ended a streak of nine straight losses against K-State in this 38-34 victory.

A classic Les Miles fake field goal in the third quarter led to OSU taking a 28-21 lead. The Cowboys were up 38-21 with just over 10 minutes left before the Wildcats roared back. But Tatum Bell was able to run out the clock late.

2006: After two seasons away from each other OSU and K-State met again for a back-and-forth affair that the Wildcats won 31-27 in Manhattan.

Josh Freeman scored a 21-yard touchdown run with under two minutes to go to give K-State the lead. But Perrish Cox returned the ensuing kickoff 39 yards to give OSU a chance.

After a few completions to D’Juan Woods and Adarius Bowman, Bobby Reid threw an interception in the end zone as time expired.

2007: As if these games couldn’t get closer, Oklahoma State upset the 25th-ranked Wildcats 41-39 the next year.

Just like the year before, K-State scored with just over a minute to go. It looked as if K-State was going to tie the game at 38, but the Wildcats elected to go for two, got it and went up 39-38 with 1:10 to go.

Just like the year before, the Wildcats gave up a late, big kick return, as Tommy Devereaux started the Pokes at their own 42-yard line.

Despite time being scarce, the Cowboys ran the ball four times and threw it only once on the drive, as Zac Robinson and Dantrell Savage got OSU to K-State’s 9-yard line to set up a Jason Ricks game-winner.

Joesph Randle scored a 23-yard touchdown run with just over two minutes to go, but this time it was the Wildcats with a chance for last-second heroics.

Collin Klein led K-State down the field. Klein hit Chris Harper on a 22-yard connection, as Harper went out of bounds at the OSU 5-yard line with 12 seconds left.

From there, Klein threw three straight incompletions, and OSU survived.

After a Ben Grogan field goal gave the Cowboys a four-point lead with 2:24 to go, the Wildcats got into OSU territory before Daniel Sams threw a ball right to OSU defensive back Daytawion Lowe at the Cowboys’ 21. Lowe ran the ball back 72 yards and the Cowboys kneeled out the clock.

2015: Stop me if you’ve heard this before, but K-State scored with too much time left.

In OSU’s 36-34 victory, Joe Hubener scored on a 5-yard run with 3:01 to go. However, the Wildcats failed a two-point conversion attempt, and down the field came OSU.

Mason Rudolph moved the Cowboys’ offense down the field and set up a 37-yard Ben Grogan go-ahead field goal.

K-State got the ball back with 36 seconds left, but Hubener threw an interception to Michael Hunter on the second play of the drive.

With just under eight minutes to go, Rudolph threw an 84-yard bomb to Washington to put the Pokes a score away. Then Chris Carson drug two Wildcats’ defenders into the end zone with 1:46 left on the clock.

K-State again got into OSU territory before Jordan Sterns picked off a Jesse Ertz pass in the end zone as time expired.

Rudolph threw four 457 yards and five touchdowns in the game.

Byron Pringle showed up to Stillwater and dominated. He had three touchdown catches and returned a kick for another score.

Despite getting drilled for much of the game, OSU somehow had a chance to win.

The Cowboys scored 20 points in the fourth quarter and got the ball near mid-field with a chance to win. OSU started its final drive of the game on its 46 with 2:16 to go, but after four straight incompletions, K-State survived the comeback attempt.