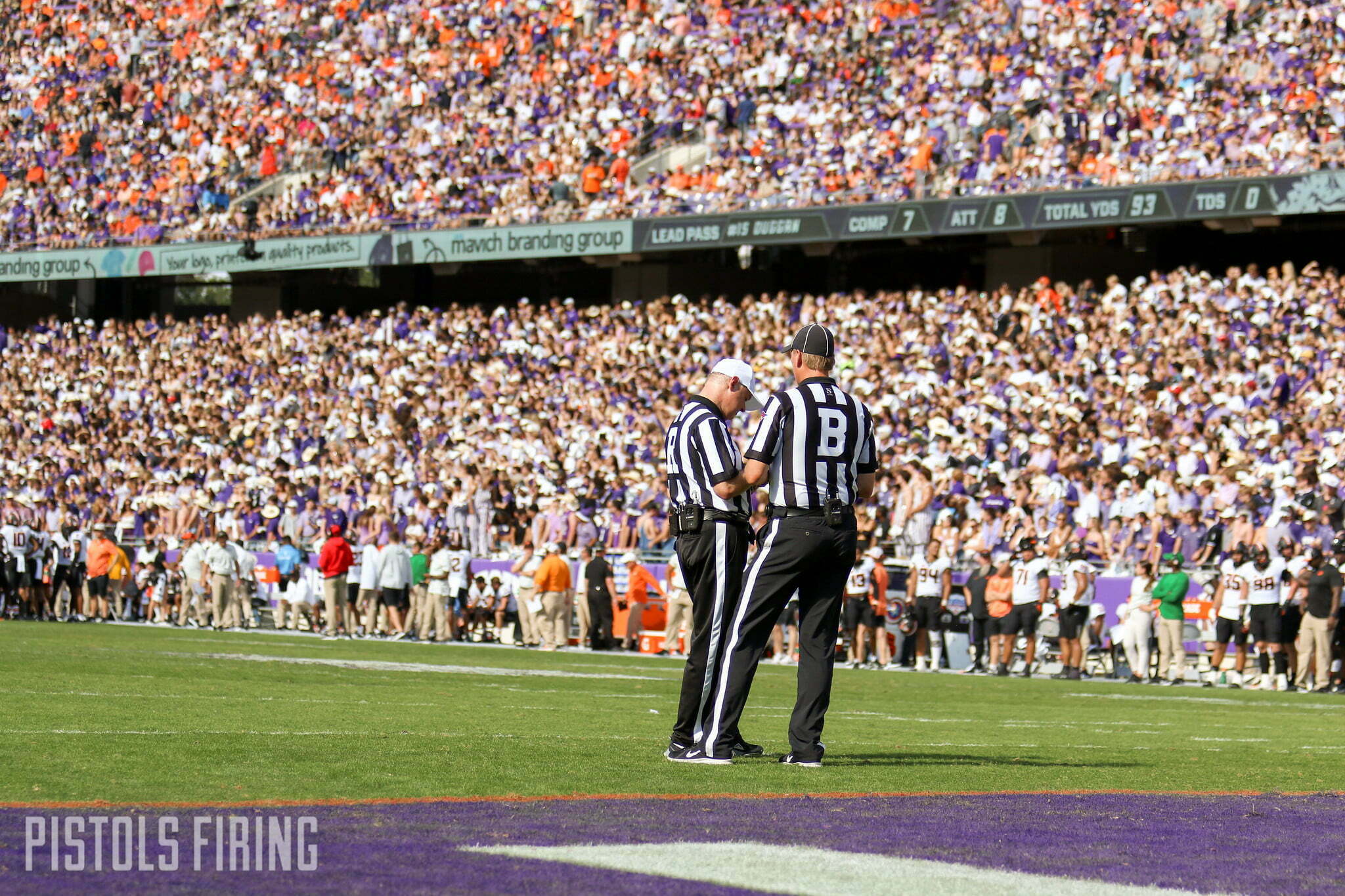 OSU’s offense in the second half: not great!

OSU’s defense and tackling for most of the game: also not great!

But topping off the badness, and by a long shot, was the officiating on Saturday in Fort Worth as OSU fell 43-40. It wasn’t just not great, Bob it was downright horrendous.

Let’s get to the report card.

There were missed calls here and there in this game just as is there is every game — but the unevenness in which this game was officiated especially stands out.

But TCU coach Sonny Dykes blew multiple gaskets about the situation and steamrolled the officials. Coming out of halftime, ESPN’s Molly McGrath reported that the officials consulted Gundy and counseled him that OSU must make quicker substitutions — again, even though OSU by rule is afforded to do exactly what it had been doing.

In the second half the officials decided that it would begin calling late subs as penalties. Each time TCU snapped the ball early when a defensive player was running off the field, despite OSU by rule being given a chance to sub in personnel, the officials called offsides. Just a complete, abject failure to apply the rules evenly.

“It’s kind of a train wreck,” said Gundy postgame, though it was unclear of whether he was referencing the officiating or his coaching staff’s handling of how the officiating was handled. “I’m not saying whose fault it is. I’m just not clear on what’s going on, to be honest with you.”

“It’s a combination of a lot of things,” he added. “There needs to be some clarity on how it’s supposed to work now. Then we have to be better as coaches in the adjustment as we go on throughout the game.”

From time to time, you can get away with a win when your running game is just-OK or below average. But in this game, with TCU gashing OSU in the running game and OSU on the other side struggling to generate running lanes, it was a double-whammy that shanked OSU’s chances of hanging on to its early lead.

OSU on the game was able to generate 141 yards rushing, but on 41 attempts, that was a measly 3.4 yards per attempt — buoyed mostly by Spencer Sanders’ 68 yards comprised primarily from scrambles.

With OSU up big early, a good running team would theoretically be able to take the air out of the ball, drain clock and sit on the lead. But OSU got so one-dimensional because of struggles up front that it compounded matters and aided TCU in its comeback.

I have a take.

I didn’t have any problem with the playcalling on offense in the second half.

Yes, six second-half points is hashtag bad. I get that. But OSU’s running game was dreadfully exposed in the second half. It had to rely on Spencer Sanders, who reportedly missed practice most, if not all, of the week leading up to the game.

Sanders was fine — he managed 16 of 36 passing for 245 yards, one touchdown, one pick, and two touchdowns on the ground — but TCU knew OSU had no running game. Sanders was back there as a sitting duck.

OSU didn’t go into the second half declaring its intentions of being right-of-OAN level conservative, either. OSU tried scoring points. It had some promising drives. If the two field goals in the third quarter are instead touchdowns, we’re probably recapping a W. It happens. It’s a credit to TCU’s defense that it made in-game adjustments to restrict OSU’s offense moreso a knock on the reflection of OSU’s lack of aggressiveness. And keep in mind: OSU had to do some musical chairs up front with some injuries along the offensive line.

For someone who reportedly did not participate in much if any practice leading up to Saturday, he sure looked spry.

Sanders was nails out of the gate with a 29-yard scamper and score to give OSU an early lead. He finished with two rushing touchdowns and one passing touchdown.

Sanders didn’t have the same success in the second half as he did in the first, and he had 20 incompletions to 16 completions, but the assessment from Gundy postgame was that Sanders played a good game and may have only missed on a couple of throws. You can pin some of the offense’s struggles on playcalling, or lack of a running game, or blocking up front, but you can’t pin it on Sanders. Healthy or not he’s a gamer who showed up in a big spot.

When is the last time OSU has had a kicker this good and this reliable? The Ice Pirate? Every time Tanner Brown trots out for a field goal I get Justin Tucker-level irrational confidence that it’s going through the uprights. He drilled a 52-yarder in this game, his season-long, and it would’ve been good from like 98 yards. Brown is now 12 for 12 on the season with a 2-for-2 mark from kicks between 40 and 49 yards and a 1-for-1 hit rate now on 50+ yard attempts. We might have an Ice Pirate 2.0 situation brewing, folks. This man has a money boot.

The 13 points combined in the fourth quarter skews the final score a bit, but you’re not going to win many games surrendering 43 points.

OSU’s defense was particular susceptible Saturday on the ground. Over the last few years the defensive line has been a strong suit of this unit, but TCU gashed OSU in the trenches for 224 yards on 43 carries. Kendre Miller had 104 yards and two scores on 22 attempts. Emari Demercado had 62 yards on nine carries. Max Duggan even had 57 yards on 11 attempts.

Through the air, Gundy’s postgame assessment was that OSU did a pretty good job defending TCU star receiver Quentin Johnston. He’s mostly right — aside from a busted coverage in OT they did about as well as you can expect against someone of his caliber — but the busted coverage was brutally timed. And Johnston still finished the day with eight receptions for 180 yards, including a clutch catch in OT that swayed momentum in the game.